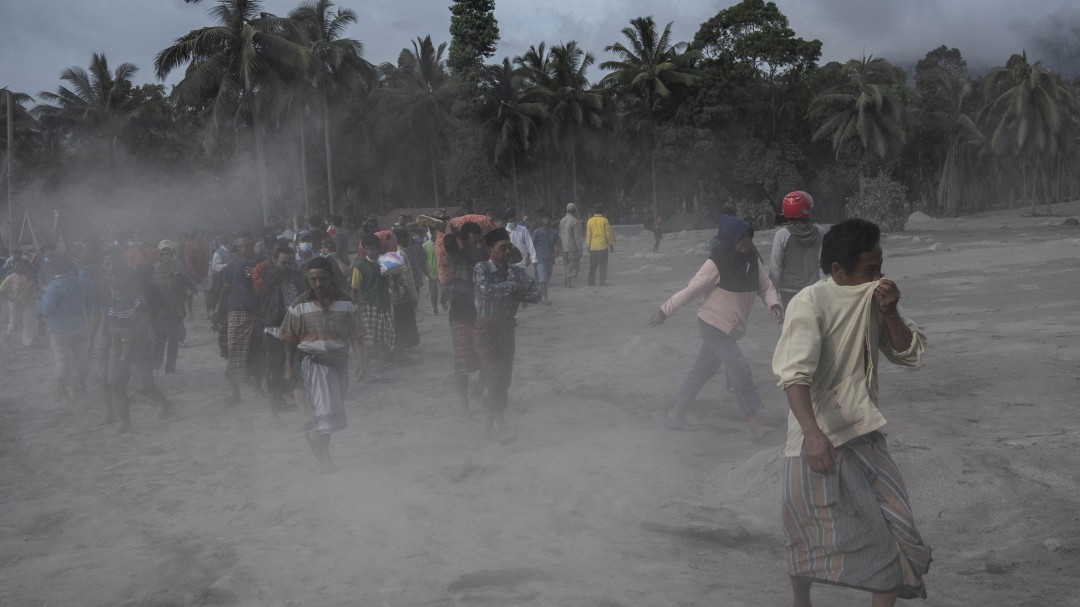 Indonesian emergency teams are assessing this Sunday the situation in the towns near the Semeru volcano, on the island of Java, whose eruption caused a huge avalanche of red-hot ash that has left at least 13 dead and almost a hundred injured with burns.

The accumulated ash reaches almost the roof of some houses in the town of Kebon, with a lunar-like appearance and where members of the National Disaster Management Agency (BNPB) are looking today for possible survivors trapped in the partially collapsed buildings, according to a video shared by the authorities.

Search and rescue efforts are carried out in eleven populations settled on the slopes of Mount Semeru, with 3,676 meters of altitude the highest in the country, although they have been hampered by the heavy rain that has muddied some areas and the low quality of the air . In addition, a key bridge that connected two of the main towns in the region has been destroyed.

According to the latest provisional count of victims, 13 people have lost their lives and 98 were injured with burns of various degrees, including two pregnant women, and are treated in hospitals in the province.

The authorities have avoided, as they usually do on some occasions when natural disasters occur, specifying a number of missing persons, although this morning they indicated that a dozen miners who had been trapped as a result of the eruption were evacuated alive.

The huge eruption of the volcano occurred in broad daylight on Saturday around 3:30 p.m. local time and caused a huge ash tsunami that eclipsed the sun and momentarily plunged the towns attached to the mountain.

In a video published on social networks by witnesses to the explosion, it is seen how a series of residents of the town of Lumajang flee in a hurry while the gigantic cloud of smoke and ash from the Semeru advances with their swords.

The BNPB has established an exclusion radius of 5 kilometers around the crater and indicated that more than 900 residents have been transferred to evacuation centers. The authorities also pointed out that they are still trying to estimate the extent of the material damage.

The Indonesian volcanology service maintains the risk in the area at level 2 (out of a maximum of 4) and issued a flight alert for aircraft circulating in the region.

According to experts, the expelled ash could reach 15,000 meters in height, above the cruising altitude of most aircraft and that solidified could cause damage to the engines.

The Indonesian archipelago sits within the so-called Pacific Ring of Fire, an area of ​​great seismic activity with 127 active volcanoes and which is shaken by thousands of tremors a year, most of them of low magnitude.

The last significant eruption of Semeru, one of the most active volcanoes in the country, occurred in January this year without any casualties, while another in December 2020 forced the evacuation of thousands of people.

This Sunday, in addition, a magnitude 6 earthquake at a depth of 174 kilometers shook the waters north of the Moluccas Islands, more than 2,000 kilometers northeast of the Semeru, without causing damage.