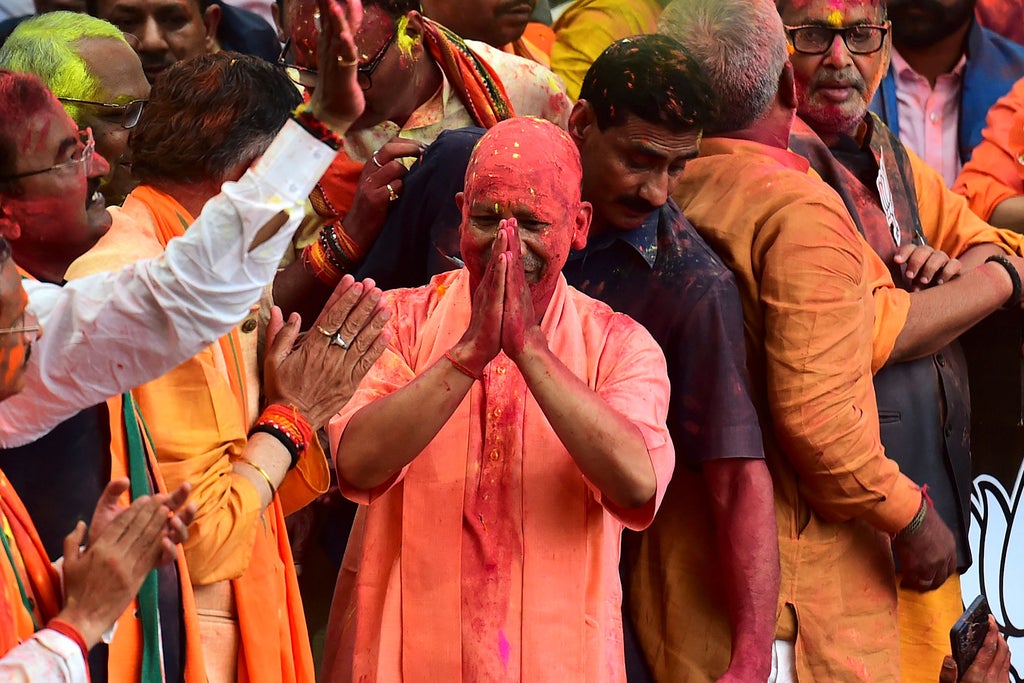 Religious processions and the use of loudspeakers have been restricted in India’s most populous state of Uttar Pradesh, after a series of violent incidents and hate speeches against Muslim minority communities were reported across the country during recent Hindu festivals.

The directive came from chief minister Yogi Adityanath, a hardline saffron-clad Hindu monk, who ordered the police to speak to religious leaders and canceled leaves of police personnel till 4 May.

Mr Adityanath ordered the police to be extra cautious as several major festivals are lined up in the coming days, with Muslims celebrating Eid and Hindus observing Akshaya Tritiya. Both could likely fall on the same day next month.

He also directed that religious programs be held only at designated places and asked the police to ensure that no such events take place on the roads by disrupting traffic.

“Do not shabha yatra or religious procession should be taken out without due permission. Before permission, an affidavit should be taken from the organizer on maintaining peace and harmony,” a tweet put out by the chief minister’s office in Hindi read.

“Permission should be given to only those religious processions, which are traditional. New events should not be given unnecessary permission,” he wrote.

In another post, the chief minister was quoted as saying: “Everyone has the freedom to follow his method of worship. Microphones can be used, but make sure that the sound does not come out of the premises. Other people should not be inconvenienced. Do not allow mics at new sites.”

The orders come in the backdrop of scores of incidents of violence during recent Hindu festivals in several parts of the country. Several viral videos on the internet in recent weeks show Hindu men wearing saffron scarves and, in some cases, carrying sticks and swords, carrying out processions through Muslim neighbourhoods, playing provocative songs outside homes and mosques, and raising incendiary slogans.

The most recent incident of violence was reported during the Easter weekend when clashes broke out in capital Delhi’s Jahangirpuri area after people participating in a procession to celebrate the Hindu festival of Hanuman Jayanti, the birth anniversary of Hindu god Hanuman, allegedly attempted to wave saffron- colored flags in front of a mosque.

The color saffron is associated with Hindu nationalist groups in India.

Members of the mob were seen brandishing swords and guns and dancing to Hindu religious songs.

The police complaint filed in the matter stated that the procession was being held in a “peaceful manner” until it reached the mosque when “one (Mohammad) Ansar along with 4-5 people started quarrelling”.

“That led to the commotion with people from both sides pelting stones at each other,” it noted.

According to local media reports, Md Ansar is the main accused in Saturday’s violence. But so far the probe does not suggest that the violence was planned, Depender Pathak, Special Commissioner of Delhi Police (Law and Order) Northern Range, told news portal NDTV.

Delhi’s ruling Aam Aadmi Party (AAP) and the Bharatiya Janata Party (BJP), which governs at the centre, have traded barbs over the political affiliations of Md Ansar, both denying any connection with him.

Earlier, several instances of violence were recorded when mobs came out in processions, making hate speeches and attacking Muslim properties during the Hindu festival of Ram Navmi, the birthday of the god Ram, one of the religion’s chief deities.

Two people were killed and several were reported injured in the violent incidents in at least five states, including Madhya Pradesh, Jharkhand, Gujarat and West Bengal, on 10 April.

On Wednesday Delhi’s municipal corporation, run by the ruling Bharatiya Janata Party (BJP) scheduled an anti-encroachment drive at the troubled locality of Jahangirpuri. Over 400 police personnel have been asked to remain on the alert for any violence during the drive.