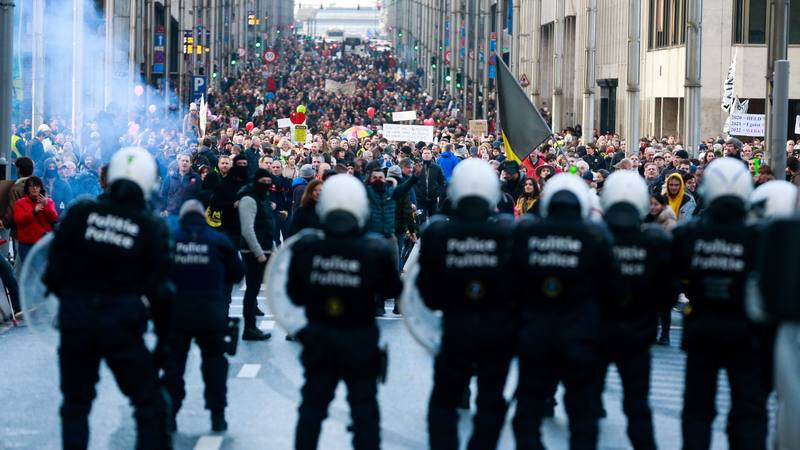 Nails 35,000 people have demonstrated this Sunday in Brussels, Belgium, against the restrictions adopted to stop the coronavirus pandemic, in a march in which there have been incidents between the police and the participants.

The demonstration, authorized by the Belgian capital city council, left from the North Station to tour the city center under the slogan “Together for Freedom”.

The police have used water cannons and tear gas to disperse some protesters, who are protesting against the measures taken as a result of the rebound in covid-19 cases in the country, in particular the obligation to present the vaccination certificate to access public places

According to the local media, some people have launched fireworks against the police, as well as vandalized some police vehicles, and there have been some officers injured.

Images disseminated on social networks show some participants destroying the furniture of some bar terraces that they have found in their path and riding barricades that have been set on fire, although at the moment it has not transpired if there are any detainees for the incidents.

The organizers of the march have denounced in a statement “measures restricting freedom, which do not constitute a structural solution for health“.

The police have made an important deployment to prevent altercations such as those recorded the last two nights in neighboring Netherlands, where several dozen people have been arrested for participating in protests against the restrictions that degenerated into violent riots with several wounded, including two by gunshot.

Demonstrations in Europe against restrictions as incidence increases

The rebound in COVID-19 cases in Belgium, where the cumulative incidence rose 19% in the last week analyzed, to 1,346 cases per 100,000 inhabitants in 14 days, has led the Government to tighten some restrictions this week, although economic sectors have not been closed or certain groups have been confined, as in other European countries.

The measures fundamentally go through imposing the mandatory telecommuting four days a week and expand the use of the mask inside cultural establishments and places, such as restaurants or cinemas, even if the COVID certificate has been requested to access them.

Belgium already requires since October to present this document – which proves that the carrier is vaccinated, has passed the disease or tested negative in a recent test – to access the restoration and cultural events.

In addition, the Government has introduced the Obligation to get vaccinated for all healthcare workers that, otherwise, from January 1 they will see their employment suspended until March 31, date from which their contract will be terminated -with the right to unemployment- or suspended until the worker is vaccinated if they oppose the dismissal -in that case without salary-.

This demonstration in the Belgian capital closes a weekend of protests in many European countries, also coinciding with a tightening of restrictions due to the spike in infections, which has led Austria, for example, to decree a new ten-day confinement – for the entire population that will begin this Monday. There have also been protests in the Netherlands and Croatia.

See also  Fit and healthy man, 21, collapses and dies at gym with family in 'immense' pain