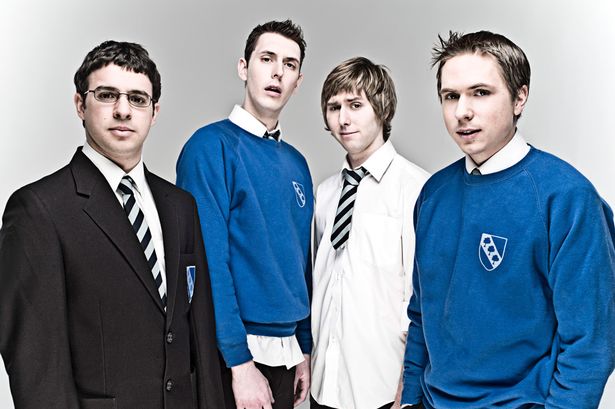 Blake Harrison looks very different to his Inbetweeners days – and he’s nothing like his dopey character in real life.

The 36-year-old actor shot to fame playing stupid yet loveable Neil Sutherland in three series of the legendary E4 sitcom and the two movies.

Millions of viewers were left in fits of giggles and gasping with disgust in equal measure at the lads’ awkward antics.

The near-the-knuckle humor and crude jokes cracked by the embarrassing teens occasionally did come under fire from critics – with there being some concerns about animal cruelty when a fish was punched by Blake in one episode.

Blake, who is appearing on tonight’s The Great British Celebrity Bake Off tonight, made his character famous for his cringeworthy dance moves and for having jokes made about his dad’s sexuality.

Despite his lack of brains, Neil was by far the most successful with the ladies in the group, including getting jiggy in Simon’s yellow car and a middle aged dinner lady on holiday.

So what happened to Blake once that puke-filled final camping trip came to an end?

Blake with some of his Inbetweeners co-stars

Blake, whose first TV role was in two episodes of The Bill in 2008, has gone on to appear in a wide variety of other TV shows.

He also played Private Pike in 2016 Dad’s Army reboot and voiced Scoop in an update of Bob The Builder between 2015 and 2018.

In 2018 he stepped behind the camera to direct award-winning short film Hooves of Clay, which he also starred in.

He is currently playing ‘Medium’ Dan in the ITV sitcom Kate & Koji and also rocked up in an episode of Doctor Who last year.

Away from acting, Blake has shown off his football skills for Soccer Aid and scored the winning penalty in 2018.

Last year, it was revealed that Blake has opted for an unusual career move.

Blake scored the winning penalty at Soccer Aid in 2018
(

As well as acting, he is now interviewing MMA fighters as part of his podcast after getting hooked on the sport.

“This has been a dream come true. I created this podcast solely so we could regularly chat MMA,” he said in July last year.

“It comes from a genuine love of sport. Interviewing the fighters feels like a huge honour.”

Blake told MMA news website FightPost the podcast was brilliant “because he got to talk to these amazing people.”

He said: “I put fighters on a bit of a pedestal because of their mental toughness and the sacrifices that they make. The amount of time they have to spend in the lead up to a fight training for all the different disciplines they have to learn .

“Then you have the weight cuts. They are just horrendous. And then the fight itself – just stepping in there.

“It is a whole different mold of human being that does that job and that fascinates me.”

Blake got married to theater publicist Kerry Ann Lynch in the Indian Ocean island of Mauritius – and all of his Inbetweeners co-stars were there to celebrate.

Although it’s unconfirmed as to whether he dusted off Neil’s incredible robot dance moves for the first dance with his wife.

Blake gushed about his relationship with Kerry Ann, who he has two children with, while admitting he’s suffered heartbreak in the past.

Blake revealed: “I’ve been dumped, of course I have – look at me! I used to be so desperate to have a long-term relationship, I’d scare the girl off.

“Thankfully, since then, I’ve been with the same special lady, so I think I finally got it right.”

In October last year, the actor told The Independent he is shocked that people are still watching The Inbetweeners today.

You’d be amazed at how young some kids are when they do watch it,” he said.

“I’m like, what are you doing, you’re not being a good parent. But I’m surprised it’s still being watched now, if I’m honest.

“We filmed it in 2007 with series one, and the fact that 14 years later, it’s still being shown and there are still teenagers now watching it and enjoying it… that to me is really surprising.”

Last week, Lorraine viewers got a shock when Blake popped into the studio looking completely different to his time as Neil.

The actor looked worlds away from his oddball character during his appearance opposite host Lorraine Kelly, where he sported curled longer hair and a gray speckled beard.

When asked about the chances of The Inbetweeners making a comeback, Blake said: “I feel like we’ve been done since 2014, when we did the last film. People just like it, so they want it to do more, but I don’t see that ever happening.”

Although giving some possible hope of a reunion, he added: “But you never know.”

Blake is putting his baking skills to the test
(

Blake is taking part in tonight’s celebrity Bake Off, but has admitted he hasn’t got any tips from Inbetweeners co-star James Buckley because he wasn’t allowed to tell anyone he was taking part.

When asked if he was beginning to think he may have bitten off more than he can chew, Blake said: “I’m not beginning to! It’s so stressful in there [the tent]! I had a little practice at home, and you kind of amble along and you kind of do it okay, and you correct your mistakes.

“But as soon as there’s a time limit, and you’ve got Prue and Paul looking over your shoulder, disapprovingly glaring at you, it gets a bit pressed.”

Blake has confessed he has no experience of baking so he does not expect to win, but it’s all for a good cause as they are raising money for Stand Up To Cancer.

He explained: “I wouldn’t say it’s intimidating meeting them, it’s intimidating when you’re in the middle of a task that you can barely comprehend, and they’re looking at you and their eyes are twitching, and you just know you ‘re doing something wrong.”

Do you have a story to share? E-mail[email protected]