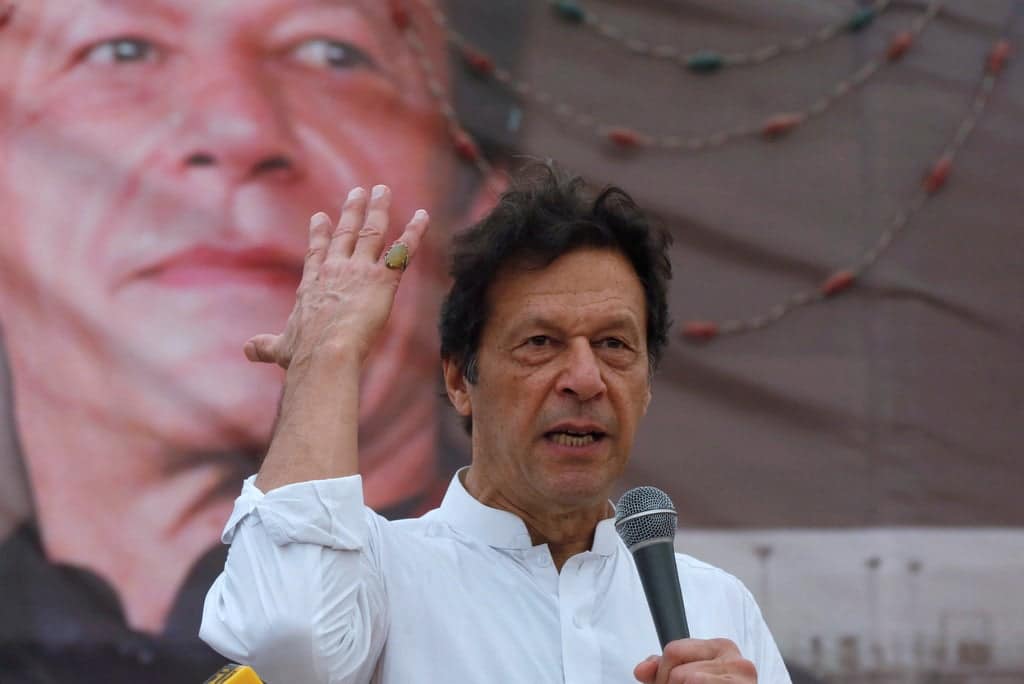 Pakistan’s prime minister Imran Khan has made a bizarre threat to some of his party’s lawmakers supporting an upcoming no-confidence vote against his government, by saying their children would be “bullied” in schools and that no one would marry them.

Mr Khan made the remarks during a public rally on Sunday, just days before the vote is set to be tabled in the Pakistan parliament’s lower legislative house on 25 March, in one of the biggest challenges in his political career.

More than two dozen members of his own political party, the Pakistan Tehreek-e-Insaaf (PTI), have broken ranks and are revolting against him by supporting the opposition’s no-confidence vote on issues like inflation and bad governance.

“Your children and families would lose respect and honor in society. No one will marry your children,” Mr Khan said while addressing the rally in Pakistan’s Khyber Pakhtunkhwa province.

“In schools, your children will be bullied.”

Mr Khan also said lawmakers continuing to vote against him would be labeled “traitors” as the people of the country were now more aware because of social media.

The prime minister also made an appeal to his party’s dissenting members.

“We all make mistakes… I am just like a father figure to you all. But for god’s sake, don’t make such a big mistake. Think about your children’s future,” Mr Khan said.

The Pakistani army, believed to be very powerful within the country’s political system, appears to be withdrawing its support for the government by saying it would maintain a neutral stance as the vote nears.

See also  Big Power Switch Off: What is it and how will it help the cost of living crisis?

Mr Khan needs 172 votes in the 342-member National Assembly to remain in power and it is believed that the opposition has a number that could use him.

If Mr Khan fails to get a majority, it would be the first time in Pakistan’s history that an elected government would fall through a no-confidence vote.

In his address, Mr Khan appeared to criticize his country’s military establishment as well and lavished praise for the Indian army in a rare comment.

“I salute India. India’s foreign policy is better than Pakistan’s, they work for their people, the Indian army is not corrupt and they never interfere in civilian government,” he said, in an apparent dig at the military establishment.

His comments sparked a debate on social media, with several calling out Mr Khan for targeting children and marriage in what some said was a “provocation”.

“’Inspiring’ PM threatens dissenting MNAs [Members of the National Assembly] with bullying of their Kids at school, and zero prospects of them getting married and horrible social lives, if they vote against PTI,” Twitter user Khurram Qureshi said.

“Everyone is laughing at Imran Khan’s marriage statement but the real issue is his provocation and threat to affect the educational environment of the children,” another user said.

Mr Khan has promised a massive show of strength and urged “millions” of supporters to reach the gates of the Pakistan National Assembly, the parliament’s lower house, on the day of the vote in order to prevent it from going ahead.

“I want all records of public attendance to be broken, to fight for the soul of Pakistan. We stand with what is right and condemn such shameless buying of politicians’ souls by political mafias to protect their looted wealth,” he said, accusing the opposition of horse-trading and bribing politicians.

See also  Cheltenham Festival live stream: How to watch every race online and on TV

Human Rights Watch (HRW) has said the remarks by Mr Khan were worrying as there could be potential violence in the country before voting. It urged the government and opposition to “deter supporters from violence”.