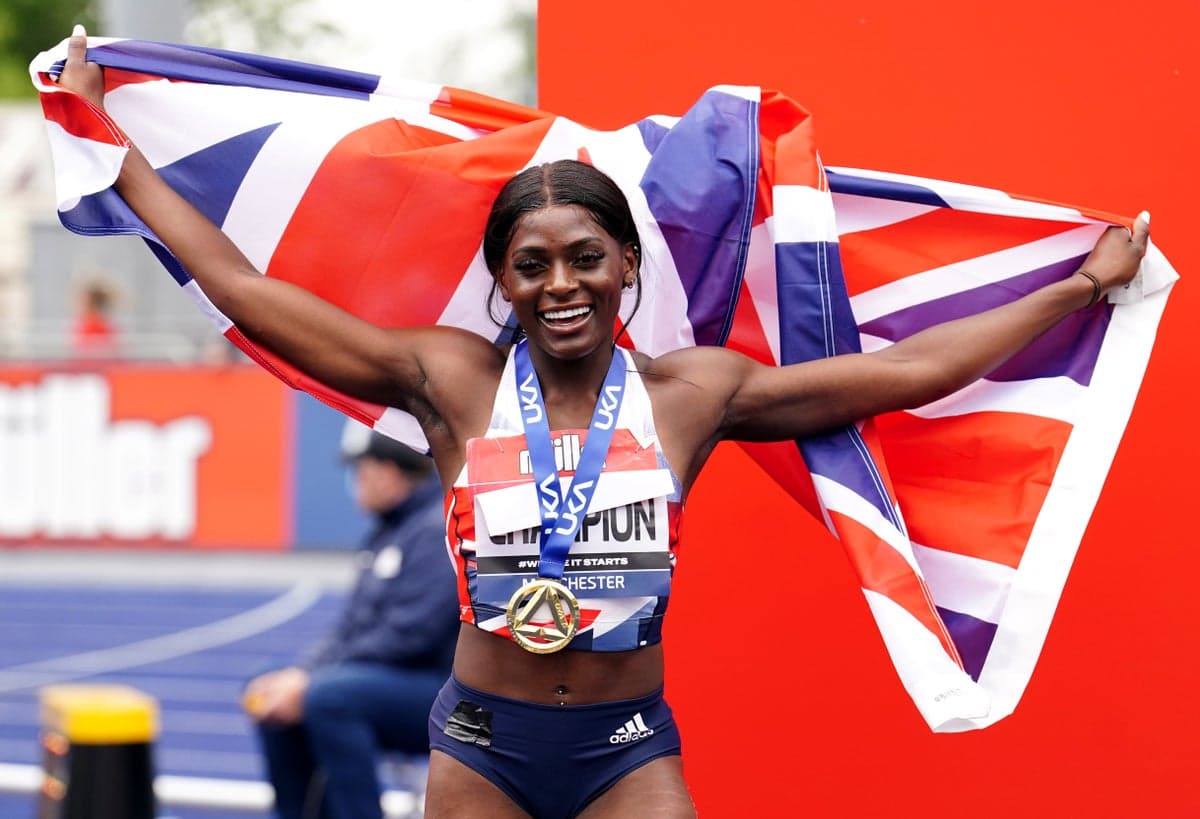 Daryll Neita insists she can be Britain’s sprint queen after winning the 200 meter title in Manchester.

The 25-year-old added the 200m crown to her 100m gold for the first women’s sprint double at the British Championships since 2010.

Neita ran 22.34 seconds to finish ahead of Beth Dobbin and Imani Lansiquot in Manchester and believes she deserves recognition having beaten Dina Asher-Smith in the 100m on Saturday.

“There are two of us now and I have worked very hard for this, we all do. I’ve always been here, I’m here now and here to stay,” she said.

“We’ve been racing since we were seven-years-old. She’s done her thing de ella and now it’s my time to do my thing. We’re great friends, we’re looking at the bigger picture.

“I know you want rivalry, we ran yesterday and I won. You can just put ‘Daryll is the British champion’ and you don’t need to see anyone else’s name in the title. We train very hard and we both want to win. I won this British Championships.

“I put my ambition as high as can be because I believe in affirmation and if you don’t believe it you won’t achieve it. If you believe in the highest then that’s what I’m reaching for. I don’t think any less.”

Despite reaching the World Championships in Eugene next month in the 100m she does not have the qualifying time, missing out by 100th of a second, for the 200m and will not double up next month.

“I ran the same time last year and same time this year. It is what it is but it’s still great. Me and my coach will adjust our plans and double up where it matters,” she said.

“It’s sad because I really believe I could make the final and challenge for medals but there are three champs this year, it is what it is.”

Nethaneel Mitchell-Blake ran a championship record of 20.05 seconds to win the 200m and book his spot at the World Championships as the wind died down briefly to make it a legal time.

“I’ve been away for a long time and haven’t run this fast since 2018. It’s been a turbulent couple of years hampered by injuries,” he said.

“I’ve slowly become forgotten. I’ve made a couple of changes, moved back to the UK and I’m in the shape of my life. I feel like I’ve got a second wind in the sport.”

Mitchell-Blake was reluctant to speak about CJ Ujah but echoed Zharnel Hughes and said he forgives him after the sprinter’s positive doping test cost them their 4x100m relay silver medal from the Tokyo Olympics last year.

He said: “That’s a very, very good friend of mine. I’ve just got on the plane to Oregon so I’d like to focus on that and enjoy my win. I’ve said multiple times I forgive him.

“I don’t think you’ll ever get over it. It’s something that will be there for life, but you have to find your best self, live in the moment and understand how you control your own destiny moving forward.

“We’ve got a senior group and we’ve got guys like Joe Ferguson coming in, Jeremiah Azu, we have to bring them in. No one can run forever.

“It’s about embracing them, bringing them into the fold and putting the best team out to not just compete but go and win a medal.”

Ferguson’s second place in 20.23 seconds saw him qualify for the British World Championships team while Adam Gemili came fifth after limping over the line with suspected cramp.

Jemma Reekie and Max Burgin won the women’s and men’s 800m, Holly Bradshaw prevailed in the pole vault, Morgan Lake was victorious in the high jump, Cindy Sember took the 100m hurdles title and Jessie Knight won the 400m to rubber-stamp her place in the World Championships squad.