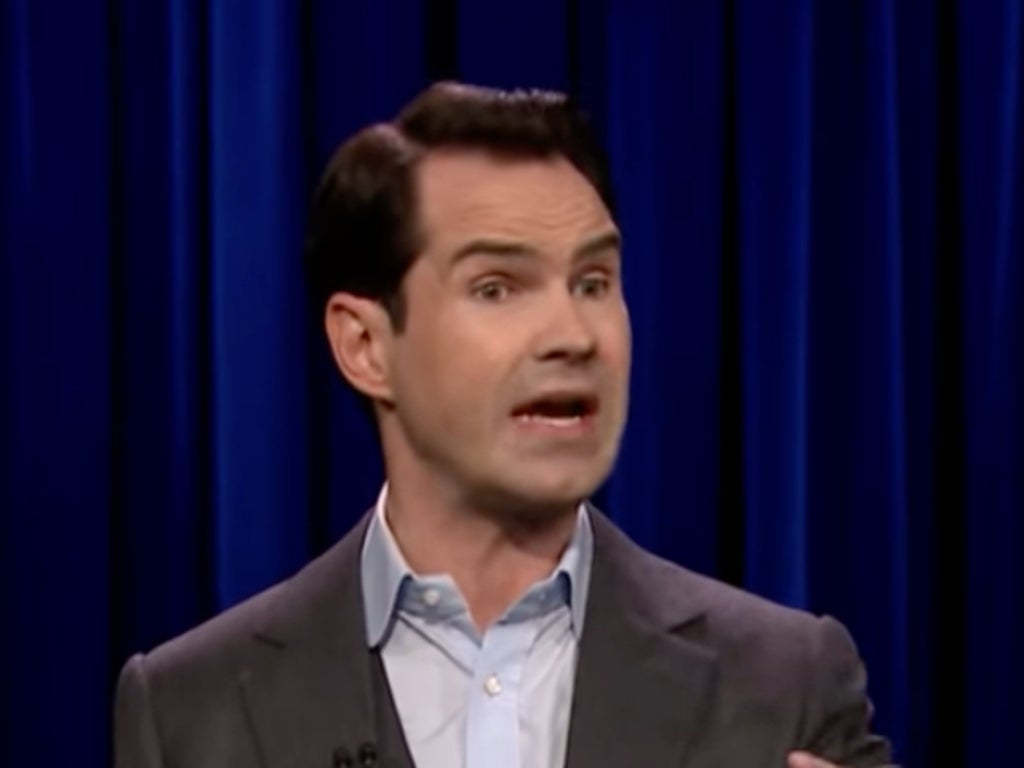 When BBC Essex asked me onto their breakfast show to discuss the recent Jimmy Carr controversy, I felt… annoyed. Because it meant I’d have to rewatch a special that I switched off due to boredom 20 minutes into my first viewing. That’s about 30 minutes before the headline-grabbing gag – described by health secretary Sajid Javid as “deeply disturbing” – even pops up.

Then, when The Independent asked me to contribute an opinion piece on the subject, I was annoyed again… at myself. Because I lied when I told the BBC I rewatched the entire thing again prior to our interview, and now the universe was calling my bluff.

Jimmy’s latest Netflix special, His Dark Material, was filmed in my hometown of Southend. Towards the show’s end, one gag suggests that the death of thousands of Roma during the Holocaust was a “positive” thing. Watch it, don’t watch it – do what you want. I’m not your mum.

In her recent Voices piece, Dr Pragya Agarwal described the gag as “not being done ironically”. I agree. There was nothing subversive or clever about it. It was hack. But there’s a gaping canyon between “ironic” and “sincere”.

Just because his joke wasn’t a masterfully crafted piece of social satire, it doesn’t make it a dangerous call to arms. It was as*** joke that made a theater full of (predominantly white) people piss themselves laughing, then second guess themselves, then applaud in shame. That’s a far more interesting conversation. I’m going to go out on a limb and say I don’t think that was a room full of Nazis. It was a room full of *us*. Is that what makes it uncomfortable?

There’s a reason comics keep coming back to the Holocaust. It’s one of the biggest stains on human history and has embedded in society two types of trauma. For members of the minority groups whose ancestors were persecuted, it’s a painful and alienating reminder of their “otherness”.

It’s also a sickening reminder to the rest of us that there exists a mechanism in our minds that can be hijacked, by charismatic leaders, to commit atrocities on fellow humans. If, like most of us, you’ve not yet made peace with that part of yourself, a well-timed Holocaust joke can be disarming.

There’s an irony to Jimmy’s fans telling the offended to “get over it”, when Jimmy’s gag extols the exact opposite philosophy. Deconstructing his own “edgy as all hell” joke, Jimmy said: “People say ‘never forget’. Well, this is how I remember: I keep bringing it up”. Buried somewhere beneath all Jimmy’s flippancy is a moral imperative that we are not supposed to get over the trauma of the Holocaust. It should always hurt and shame us, and an occasional dose of gallows humor helps to grease that wheel.

When Jimmy is on stage, Jimmy is acting. Comics play versions of themselves who shamelessly, flippantly and deliberately misinterpret information to subvert our expectations.

What’s especially toothless is Jimmy introducing his own gag as a “career-ending joke”, when he knows it’s about to slay the room – having tested the material on smaller audiences for weeks leading up to the special. Then there was his quippy reaction from him to the backlash, stating that he’s “going down swinging” – does this straight white man really believe his career is over? When “cancelled” stars are receiving Grammy noms left right and center? Because the whole “comedy martyr” shtick it’s going to look a bit silly when his next special from him (Jimmy Carr: Scoundrel Christ) drops in 5 years.

I’m a working stand-up of nearly five years, and I see comics trialling darker material than Jimmy’s on a nightly basis. Sorry to twist the knife, but His Dark Material is truly nothing special. I’m currently honoring a joke myself about how much Hitler loved his dog. An audience member once told our MC that she found my Hitler material “in very poor taste”. *I* think what Hitler did was in very poor taste. And unless you’re a dog – or a Nazi (!?) – I’m really not sure who my joke is offending. Alas, certain buzz phrases will always catch a half-listening punter, or Netflix viewer, off-guard.

His Dark Material is a bit lazy. The Holocaust gag exemplifies that. But that doesn’t make Jimmy a Nazi-sympathiser. That’s it. That’s the tweet.

Jordan Gray is an Essex-born comedian, screenwriter, and creator of the record-breaking ‘Transaction’ comedy series