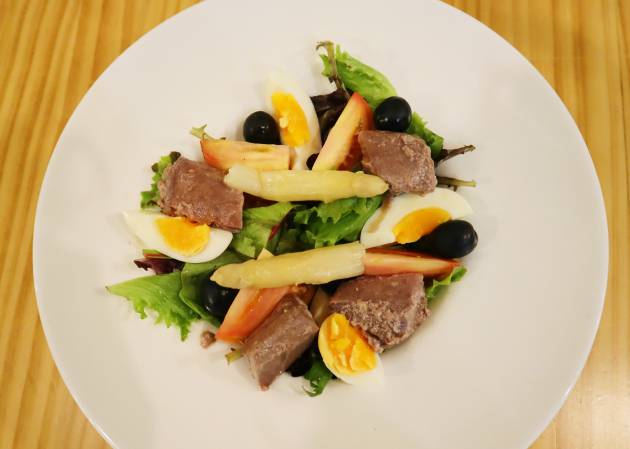 What has become of the illustrated salad, of that dish that captained that (tiny) part of the menu where vegetables were cornered during the last century? That salad that carried an intellectual, French-style name, and that piled up such an opulence of vegetables and guests that it could not be stirred without overflowing such a fertility tray. Lettuce, tomato, onion, black olives, asparagus, carrot, bonito, boiled egg. Even anchovies, when there were bitches. A fantasy, a garden of Eden. How was the illustrated salad born? Was Voltaire invented, was it in the Encyclopedia? Well no: foodies friends, the illustrated salad is a traditional Aragonese dish. Take it now. Drop the bag of gourmet sprouts and listen.

To understand this story, we must first go back to the origin of the salad. And in the West, going back to the past means talking about the Romans. Either because with them we got to know the orderly civilization, or because they were the first to promote the crucifixion as a logo. The word ‘salad’, in fact, comes from the Latin term ‘salata’, which meant ‘salty’ and which shortened the expression ‘herba salata’, or ‘salty herbs’. That is, lettuce or endive, arugula or watercress, spinach or cabbage, which were eaten raw and the Romans salted to counteract their natural bitterness.

In these times of plastic within plastic, of mézclums with colorful and insipid leaves, it should be remembered that the salad was born that simple: a fresh and frugal dish that, in addition to salt, added vinegar and oil as infallible assistants. “In Rome, until the beginning of the 1st century, meals began with a spiced salad. From that time on we see that it descends positions and is ingested at the end ”. Miriam Sagarribay points it out in That was not in my gastronomy history book, where it also clarifies that, for this reason, we know common lettuce as “romaine lettuce” (nothing to do with the Caesar salad, eye).

So they illustrated, so, so

How did the salad ascend to the next rung, how was it illustrated? In its origins, the salad was conceived as a medicinal dish: Galen used the juices of lettuce to sleep better. Cato argued that “there is nothing healthier than eating cabbage sprinkled with salt and vinegar.” Pythagoras, however, called lettuce the “eunuch plant,” as it calmed his stomach but also lowered his excitement a little lower. Green had to be added something more colorful, to cheer up the crop and the spirit: the salad maker he had to overcome his minority, give himself up to libido. And there the French entered; first with science and then with art.

Angel Muro account in The Practicón that, until the 19th century, the salad was dressed in Spain without drying the vegetables, and also dissolving the salt and pepper in the vinegar. Double mistake. You have to dry well and mix in oil, and then “fatigue the salad”, that is, stir it with panache, incorporating the vinegar at the end. The inventor of this technique was none other than Jean-Antoine Chaptal, Minister of the Interior with Napoleon, one of the 72 scientists whose name is inscribed on the Eiffel Tower and an illustrious mind of the Enlightenment (who also transformed viticulture). His seasoning method “has two advantages, since the salt and pepper are distributed equally, and the excess vinegar precipitates under its own weight at the bottom of the salad bowl.” Ángel Muro synthesized Chaptal’s science in 1894 with a delightful epigram: “You need a prodigal for oil, a prudent for salt, a stingy for vinegar, and a fool to stir it.” The first and last are usually easy to find.

Standardized the dressing, the French continued to review the ingredients. Alexander Dumas Sr., in his Great Cooking DictionaryHe confessed his contempt for plants: “The best salad dressed with the most superior dressing must be thrown away, because man has not been raised to eat herbs like animals that walk on all fours.” So he invented a salad as powerful as his ego, to which of course he gave his last name: lettuce, hard-boiled eggs, and tuna. She also tossed in anchovies, pickles, and chervil, and garnished it with mustard. His son, determined to surpass his father in everything, went out of his way with narcissism and counterattacked with the “Francillón salad”, which appeared in the play that gave him his name (and which Marcel Proust would make famous by mentioning it in En search of lost time). Junior’s plate consisted of potatoes, mussels (or clams) and truffle slices cooked in Champagne. In other words, from Dumas pater’s libido, to his son’s pornography.

But it is in the author of The Count of Monte Cristo, in its tuna and bullfighting eggs, in the illustration with animal ingredients, dear salad makers, where we find the great antecedent of the illustrated Hispanic salad, which curiously those of us who most legendary fought the French when they decided to invade us, championed us, pushed by the aforementioned Bonaparte with his hand on his chest.

The illustration of ham

“Who does not drink after salad, does not know what is lost”, says an Aragonese saying. The saying “eloquently reveals the deep-rooted custom, especially in Huesca towns, of drinking once the salad is finished the broth from the leftover dressing, which was distributed into glasses and drank. This in the best of cases, since on many occasions it was taken directly from the plate itself ”. Gimmicks, scruples? Go crack it. This is Aragon!

The previous anecdote is taken from Aragonese cuisine, canonical book in the community published in 1978 by the gastronomic chronicler José Vicente Lasierra (Javal). That the illustrated salad is since ancient times a traditional dish of the Baturrismo It is logical, since the regional garden makes up an unparalleled orchard, often unknown compared to the more famous fame of the Navarre valley and often undervalued by the natives themselves. Aragonese kitchen garden, for example, it starts with a recipe that brings together all that edible festival in a bacchanalian salad: spring shoots, spring onions, Pontigo peppers, carrot, spinach, chard, vine tomato, fresh garlic, white asparagus, wild asparagus, broad beans tender, artichokes, celery, onions from Fuentes, bisaltos, peas, borage … An offering to the total land. Giuseppe Arcimboldo painting the Virgen del Pilar.

The illustrated salad, called mixed when Spain began to become modern, and that many Aragonese do not know as a daily dish of their own, does not have a canonical recipe, like all popular meals, since things changed from one valley to another, from one town to another. another, depending on the season and what was on hand. But its standard composition is found in books of inquiry such as Aragonese family recipes, by Amalia Baqué and María Amalia Mainer: as a base, lettuce, tomato, chives and green pepper, and as sophistication, tuna (in oil or pickled), hard-boiled eggs, asparagus… and Serrano ham! Chachán!

Here is the real surprise that everyone, inside and outside of Aragon, seems to have forgotten: “There is very little information in the books, but the true Aragonese illustration to the salad was to put a slice of ham on it”, reveals Juan Barbacil, secretary from the Aragonese Academy of Gastronomy. It turns out that the flag that Agustina flew was a piece of pig waving over the canyon. Which says more about our Enlightenment than the complete works of Gaspar Melchor de Jovellanos and Fray Benito Jerónimo Feijoo. Truffles, seafood, champagne? We, even with the hoe in hand and surrounded by magical greenery, have never stopped dreaming of the leg of a chon, of the freedom of a good ham.

We asked the chef David Baldrich, from the Zaragoza restaurant La Senda, to adapt the classic illustrated salad recipe to these electric times. The choice is not trivial: Baldrich is one of the most conscientious defenders and promoters of the Aragonese garden in the region. Choose products with a label: pink tomato from Barbastro, sweet onion from Fuentes, asparagus from Navarra (a denomination that includes Aragon), olive grove of black olives. Pickled carrot. Home egg. And as the tuna logically does not come from the local shore, it changes it for trout, which is also pickled at a low temperature. To combine textures, turn the asparagus into ice cream and scratch the egg in classic mode. Of course, respect the base with some tender green shoots. And the ham? Well, for any other time: always from Teruel, of course.