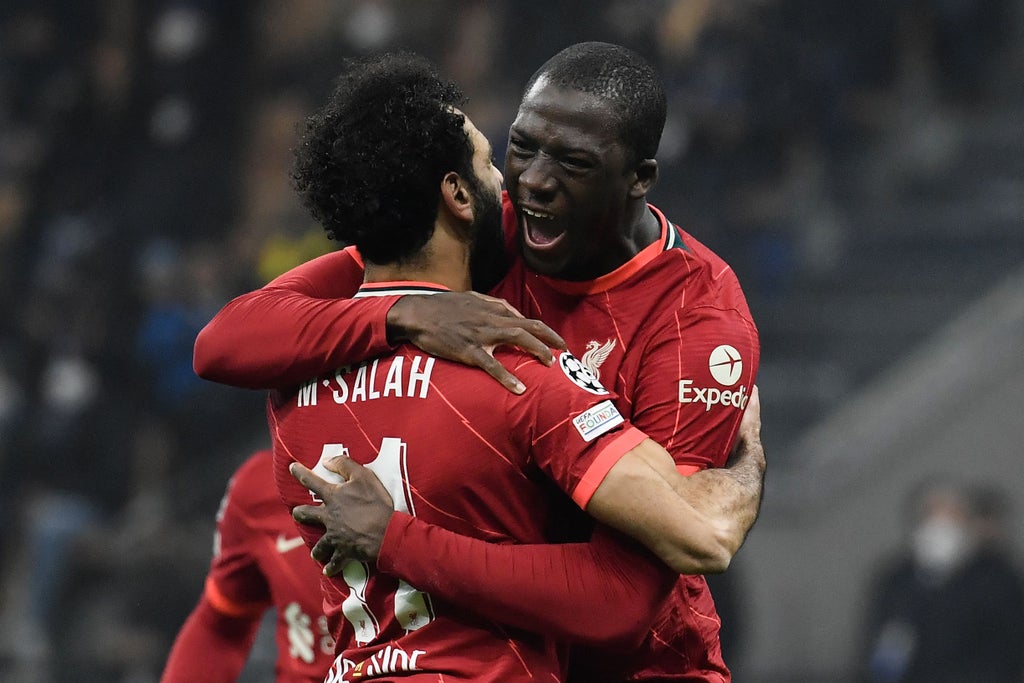 There was a thundering cry from those of a home persuasion in the San Siro terraces as a familiar sight materialized in front of them: Denzel Dumfries storming down the right at speed.

He’d gotten in behind Virgil van Dijk and sized up a low cross to set up a certain goal for Edin Dzeko, waiting free in Liverpool’s box. The delivery didn’t reach the intended target, Ibrahima Konate intercepted the ball with a last-gasp slide that drew massive appreciation from Alisson.

Jurgen Klopp applauded wildly on the touchline, but that was just one noteworthy episode in a whole series of them from the centre-back on Wednesday night.

There were three more interceptions and two shots blocked, but the numbers don’t really tell the whole story about the scale of work required to shut out Inter and seize a 2-0 victory in the first leg of this last 16 tie. Konate switched superbly between aggressive front-foot defending and a more measured focus on positional play.

Van Dijk was incredible next to him, the Dutchman returning to his benchmark-setting form pre-injury, but that is expected. ‘Virg is Virg,’ as they say at Liverpool’s training complex, a nod to the fact extraordinary is his norm.

But Konate, at just 22 and with heaps of space and time for improvement, truly impressed. “We defended really well,” Klopp said.

“The way you have to defend – we like to win the ball early but if that is not possible… and against them it is really not possible because they make the pitch really big, the three centre-backs, they pass a lot of back passes to them and then from there they go diagonal to either Dumfries or Ivan Perisic.

“That makes it really tricky, so you have to defend with passion; organization helps as well with but with passion and I thought defensively it was a really strong performance.”

Konate, with starts against Manchester United, Chelsea, Tottenham and Milan as well, is clearly Klopp’s preferred option when recovery pace and greater physicality is required.

The player is a significant for the next phase of the manager’s own evolution and that of the team as a whole. The Liverpool alumni that ended a three-decade league drought did so by winning in “500 different ways,” but chiefly with the same personnel.

The Merseysiders now have a deeper variety in who they can bank on to secure victory, represented by the use of Konate, Diogo Jota, Luis Diaz and how the midfield shapeshifts.

For the first time in his managerial career, Klopp has had the luxury of keeping his core assets to develop together at Anfield. He has rightly been attached to the spine that supplied the status of champions of England, Europe and the world, but is adjusting to a new comfort: richness in options.

It will, by his own admission, take some getting used to: “I have the opportunity to make more changes and cannot always play the same line-up just because we won the last game. It is something we have to learn together. We never had it before. It is pretty exciting.

The learning process was put into practice at San Siro, especially in Klopp’s use of substitutions. Jota may have picked up a twisted ankle, but the Roberto Firmino change made huge sense for tactical reasons; a solution for holding the ball better. Not only did he get the goal that bent the game to Liverpool’s will but also made their most tackles to disrupt Inter’s rhythm at a crucial period.

Klopp used to stick for too long, both in terms of those on the pitch correcting flaws in approach, but also with the predictable nature of starting line-ups in the past when several injuries weren’t at play.

That is how things were. The triumph over Inter was a taster of how it will be moving forward.