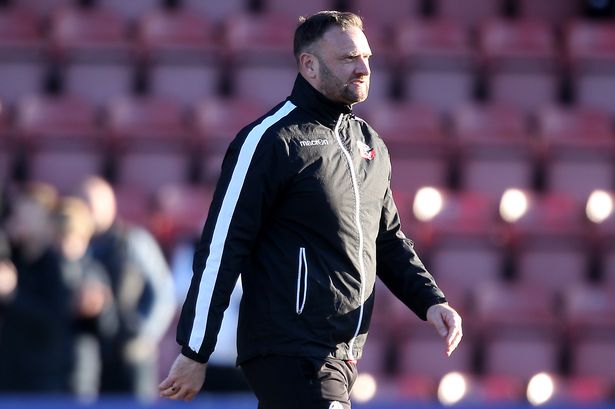 Ian Evatt says Bolton Wanderers will not turn down a return to the Championship this season as they aim to make a late charge for the play-offs but that the Whites want to stay in the second tier when they get there and will be stronger after the upcoming transfer window in the summer.

Wanderers, having won promotion out of League Two last season, have ambitions of making it back-to-back successes with hopes of making the top six this campaign.

The gap to the top six is ​​nine points and Wanderers have a vital week when they return to action after the international break which could determine their campaign’s outcome and have a big say in which division they will be playing in next season.

They take on Wigan Athletic at the DW Stadium before home clashes versus fellow play-off hopefuls Portsmouth and Sheffield Wednesday with three games in the space of eight days which will have a big say in if their hopes of being in the Championship via the play- offs is still realistic – or if Wanderers will still be in League One in 2022/23.

Wanderers have been put in this position thanks to their January transfer window business which has seen them obtain the likes of Dion Charles, Jon Dadi Bodvarsson, Aaron Morley and Kyle Dempsey.

That business has helped to build upon strong foundations to the squad which bodes well for the future.

See also  Willie Nelson at the peak of his powers, Bloc Party attempt a comeback – the week's best albums

Evatt admits Wanderers might not be ready to reach the Championship yet, though they would not turn a return to the second tier of English football down if it comes their way this season.

But he has vowed that when Wanderers do reach the Championship, he is adamant they will stay there and not become a yo-yo club which jumps between the second and third tiers.

And with the summer transfer window to come, Evatt believes his side will be stronger for next season too.

“And also we’ve got another window before next season starts and I guarantee we’ll be stronger again.

“The way we play and our brand, it’s good to watch. It is exciting and people want to see it, they want to see us attacking, dominating the ball and playing with speed and tempo.

“I think that’s what we’re doing, that’s what we’re evolving into and I think everybody is happy to see it. We just want to keep doing us, keep performing well, keep being the best version of us. If we can keep doing that, I have no doubt that the fans will be on board and buy their tickets again for next season.

“I keep saying it, this is a club going places – there is no doubt about it. We’re heading on the right path. We would have all loved back-to-back promotions, that would have been the absolute dream.

“But what we have done is build real solid foundations to continue progressing and moving forward. What we have to remember is it was a big enough step from League Two to the top of League One, that’s a big step.

“But to the Championship, you have to be ready. Are we ready at the moment? Maybe not, but we will be when we get there. There’s still lots of work happening behind the scenes still improving and developing the entire football club, not just the first team.

“There are things going to happen with the academy, the B team/under-23s – that decision still hasn’t been finalized. This club is heading in the right direction and I’m proud to be at the forefront of it.

“We’re never going to turn it (the Championship) down, none of us would. But when we get there, we want to stay there.

“I think what you’ve seen from newly promoted teams from League One, there are teams at this level right now who are a good example. We don’t want to be that yo-yo team that come up and go back down.

“We want to go up and stay up, and we have to be ready for that because it’s huge. Massive amounts of money being spent. The structure and foundation of the club is improving all the time and I know that Sharon (Brittan) And the board are getting this club into the right position to enable us to get up and stay up.

“If it’s this year, whether it’s too early or not I don’t know. But certainly if it’s next year we will be ready, there’s no doubt about that.”