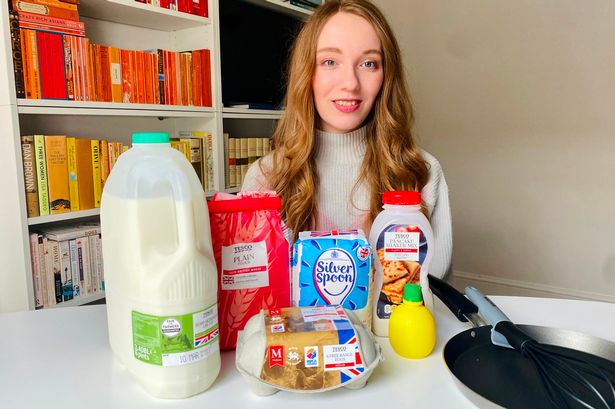 When I think of Shrove Tuesday, I think of Aunt Bessie’s frozen pancakes, as that’s what my mum used to serve up when I was a child – cooking wasn’t exactly her strong suit.

But little I didn’t care that they weren’t homemade – they were covered in sugar and therefore I was happy.

However, flashforward to today and I now know that there’s nothing that quite compares to tucking into pancakes you’ve successfully flipped yourself.

I’ve been on a mission to try and make the best pancakes and along the way, I tested out popular recipes by the likes of Mary Berry and Gordon Ramsay along with a pre-made pancake shaker mix from Tesco to see how it fares.

There was a clear winner out of the three and it helped me learn the trick to making the ultimate crepe-like pancakes.

I started the test with Mary Berry’s easy pancake recipe from her Complete Cookbook, which offers precise timings for everything – the batter (made with 125g of plain flour, 300ml of milk, one whole egg and an egg yolk) needs to rest for 30 minutes , the pancakes are cooked for 45-60 seconds on one side, then flipped and given a further 30 seconds on the other.

The recipe calls for two to three tablespoons of batter to be ladled into a pan that’s on medium heat and spread around, but even with a small pancake pan, this proved not quite enough to cover the whole bottom, so a few liberties had to be taken.

The cooking time of 60 seconds worked nicely for one side, but 30 seconds did not seem to be long enough for the other, so again I had to improvise a little.

Despite a few issues with the recipe itself, the pancakes were a nice colour, they looked like the photo from the recipe and they tasted pretty good.

Definitely your average pancakes, but I wouldn’t complain if someone served these up to me on Pancake Day.

Next came Gordon Ramsay’s ‘most amazing pancakes’ recipe which he shared in a two-minute video on Twitter during lockdown last year, garnering thousands of likes.

His method is a little different to Mary’s, with two whole eggs added to 100g flour and 300mls of milk. Everything is whisked together before being left to rest for just 15 minutes.

Ramsay encourages his followers to heat a non-stick pan up really hot, adding a spray of oil to make it smoke, before cracking on with a generous ladle of batter and “rolling it around”, to make the pancake thinner and crispier.

When it comes to cooking, he simply says “leave it to cook on the heat”, so you’re on your own for timings, but I went with around 60 seconds as before.

The chef’s method was less precise than Mary Berry’s
(

Flipping pancakes is a skill I’d not previously mastered, but thanks to a top tip from Gordon, that’s all changed.

He says: “How to flip a pancake perfectly, tap your pan twice, shake and it removes. Bring the pancake to the end [of the pan] and then push away and flick back with the wrist.”

Turns out, it really is that simple.

Once flipped, he recommends giving it 30 seconds on the other side before serving – and he says you can add your lemon juice straight into the pan while cooking to get things really tasty.

The pancakes were much thinner than Mary Berry’s, with crispy edges and the taste was better too, much lighter, potentially due to less flour in the batter.

Ramsay wasn’t lying when he said his pancakes were ‘amazing’.

Tesco pancakes on the left, Gordon Ramsay ones on the right
(

Finally, I compared the chefs’ recipes to a pancake shaker bottle from Tesco, which I’m sure many time-strapped shoppers will also be using today.

Though, if you were thinking of buying one at the last minute, I’d urge you to reconsider.

The method here couldn’t be easier, you simply add cold water to the bottle, pop the lid back on and give it a good shake for two minutes, or until the mixture has combined. You then heat and oil a pan and pour the contents in to make your pancakes.

However, you get what you give and in this case, you get a thick, lumpy batter that makes bizarre pancakes.

Pouring instead of using a ladle is a faff as you have less control over the batter and the amount of it that ends up in the pan. As such, every pancake I made using this was a different size, shape and thickness.

The batter itself was also a strange color compared to the two homemade ones, it looked rather rubbery as it cooked and got gradually darker – it was very reminiscent of the frozen Aunt Bessie’s ones, which I’ve come to realize isn’t very appealing .

Cooking time was much longer for these, with the bottle recommending one to two minutes on each side – and the pancakes really did need that extra time.

But despite all this, the end result wasn’t completely inedible.

Don’t get me wrong, the pancakes were odd, with a more savory taste that would have suited a ham and cheese filling instead of lemon and sugar, but they didn’t end up going straight in the bin, so I can’t give them a zero.

The £1 shaker bottle might initially seem like the best and easiest option while you’re in the supermarket, but it’s worth it to put in that little bit more work and make the pancakes from scratch.

I spent around £3 buying the ingredients for the first two recipes (plus £10 on a proper pancake pan) and it was money well spent!

There was a clear winner here (Gordon Ramsay pancakes on pink plate, Mary Berry on orange and Tesco on blue)
(

Putting the pancakes to the taste test
(

While Gordon Ramsay’s two-minute pancake tutorial wasn’t as precise as Mary Berry’s or as simple the Tesco option, it turned out to be the best of the bunch.

I learned a lot from all three of the tests though – for instance, leaving your batter to rest for 30 minutes as opposed to 15, seemed to make no difference whatsoever to the end result.

Similarly tapping the pancake pan on the hob before attempting a flip, really does work wonders – as does the push and flick motion demonstrated by the Michelin-starred chef.

I’ve probably eaten enough pancakes now to last me until the next Shrove Tuesday, but you can bet that when it rolls around in 2023, I’ll be looking up Ramsay’s recipe again.

Do you have a top cooking tip to share? We want to hear all about it. Email [email protected]

Savvy mum shares supermarket trick to feeding her family of five for just £1.90

See also  Mark Warburton: 'Losing the dressing room at QPR and all that nonsense? Not at all'