Skip to content
Home News ‘I had to leave my other children behind’: The Ukrainians fleeing terror — and their Russian relatives who don’t believe them 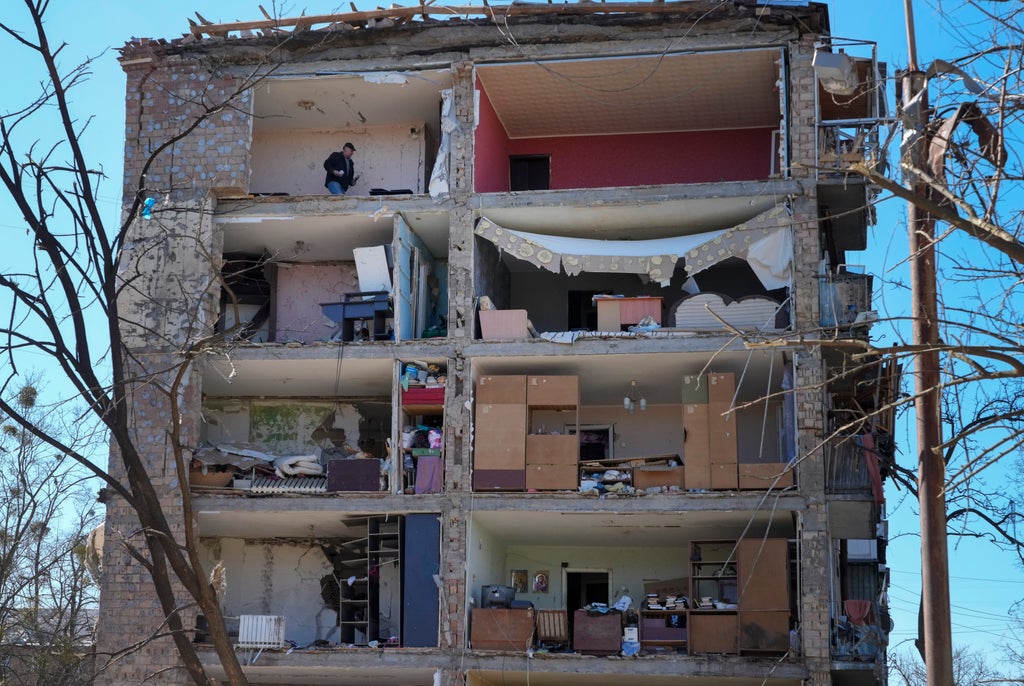 Artillery thuds through the pearly afternoon sky, growing louder and louder, yet Maria does not flinch. The young mother sits alone cross-legged on the floor, cradling her new son Mark. The baby was born amid a hail of bombs and bullets in the small Kyiv suburb of Vorzel, just days into Russia’s full-scale invasion of Ukraine.

She presses the baby, draped in soft blankets as the afternoon freeze sets in, close – smiling for a moment. But Maria’s face falls when I ask gently if this is her first child de ella. “And now they are under Russian occupation.”

In addition to not knowing when she will see her other children again, Maria is unable to reach them, as all communication lines have been cut off, along with electricity, heat, and food supplies. Having just boarded a bright yellow bus to an open field after traveling down the intimidating humanitarian corridor, she has no idea where she will go from this “transition point” outside the city. Oleksandr, Maria’s ashen-faced husband, joins her, knowing he could at any moment be conscripted into the military.

Yet they do not complain. It makes no sense to complain. Every single person’s life has been dramatically upended and wrenched upside down. Everyone has lost someone; everyone has lost something. Regardless of how the forthcoming weeks, months or even years unfold, nothing will ever be the same again.

For Ukrainians, it’s hard to grapple with the notion that such a vicious conflict has raged for a month as the world watches on, unable – or in many minds, unwilling – to shield and protect the most vulnerable from the senseless killing.

“We are doing everything we possibly can on the ground to keep them out. We will shoot down every aircraft we can, but we cannot stop them from bombing us from the air,” stresses Oleksiy Kubelba, Head of the Military Administration for Kyiv Province. “But if we are allowed to close the skies if a no-fly zone is enforced, then no missiles and bombs can be dropped, and we can stop this killing.”

Scattered across Kyiv, and along the main arteries in and out, are electronic billboards calling for “NATO (to) close the skies,” followed by the chilling subheading: “We don’t ask, we beg.”

Imposing a no-fly zone has dramatic geopolitical implications, requiring NATO to shoot down aircraft while policing it and putting NATO countries into direct conflict with Russia. It’s easy to see how that could lead to an all-out conflict with an erratic, nuclear-armed enemy. Yet to explain this to Ukrainians – traumatized civilians who are scarred by the images of bloodied babies and limbless children — feels hollow and selfish. To them, World War Three has already begun, and will only end the quicker that Washington and its western allies act.

Distressing, too, is the Kremlin brainwashing of friends and family on the Russian side. Not a day has passed in which a Ukrainian has not regretted to me that even photographs and anecdotes of the aerial assaults are not enough to convince relatives and acquaintances over the border of what is transpiring.

“My house was shelled, destroyed,” one young survivor, Ana, pants breathlessly from a bunker on the edges of the capital, having escaped her home city of Kharkiv. “I called my sister and my cousins ​​as it was happening, holding the phone out so they could hear the horrors, and still they did not believe me.”

On another snowy afternoon, I sit in a courtyard of a Kyiv apartment complex as a cluster of elderly women — widows and grandmothers — prepare Molotov cocktails in case Russian forces enter the strangled city.

“This is my land, and I will not go,” a 60-year-old university professor named Larissa asserts. “I will hit the Russians with everything I have. I will tell them all to get out of here!” Shaking with anger and sadness, she takes my hand and continues: “Almost all Ukrainians have relatives in Russia. My own sister is there and doesn’t understand the truth; she doesn’t believe me. This is what Putin’s propaganda does.”

Indeed, that is what war does to people. It sows deep distrust. It divides families between borders, sides, allegiances. The truth is one of the first casualties.

Ukraine’s former Minister of Infrastructure Volodymyr Omelyan – who immediately took up arms with the civilian-military wing known as the Territorial Defense forces in the hours after the dawn February 24 onslaught began – sees a frail silver lining in the war. “Frankly, I am happy this is happening right now. Otherwise, we would be stuck with a Soviet past for another four decades, ”he boldly declares from his former office of him, now transformed into his home and his military base of him. “Even in eastern Ukraine, those who may not have been Putin lovers but were in favor of Russia understand now; they understand the monster we are dealing with.”

Certainly, many tell me that even those who skewed on the “pro-Russian” side before the violent intrusion started are now firmly behind the Kyiv leadership. The pride in President Volodymyr Zelensky is palpable, a driving force that keeps Ukrainians fighting on as the death toll mounts and buildings blister to the ground.

“I am very proud of our president; he is Jewish. Before, people around the world may have been, ‘Ah, a Jew.’ But now people see him as somebody who is strong,” the chief rabbi of Ukraine, Moshe Azman, says from the steps of the Brodsky Choral Synagogue, where scores wait for evacuation beneath the soundtrack of distant mortars. “We are so very proud.”

Ukrainians are determined to fight for their freedom and face whatever daunting days are ahead, not behind but alongside their popular leader. Over and over again, Ukrainians insist that driving out the population is what Putin wants, and they are not ready to hand him such a moral victory.

Inside the once gilded and lovely Central Train Station, overstuffed with weary women and children waiting patiently for trains to arrive to journey them to the slightly safer western enclaves of the country, I see a mother kiss her teenage son and daughter on the forehead, weeping as she waves them goodbye.

“I want my children to be safe, but I need to be here for my parents, my husband, my country,” the well-dressed woman, whose name I never learned, says defiantly. “This is my home. I should not have to leave. The Russians are the ones who should leave.”