Skip to content
Home News ‘I am really freaking out’: 911 call made by James Crumbley on day of Oxford school shooting is played in court 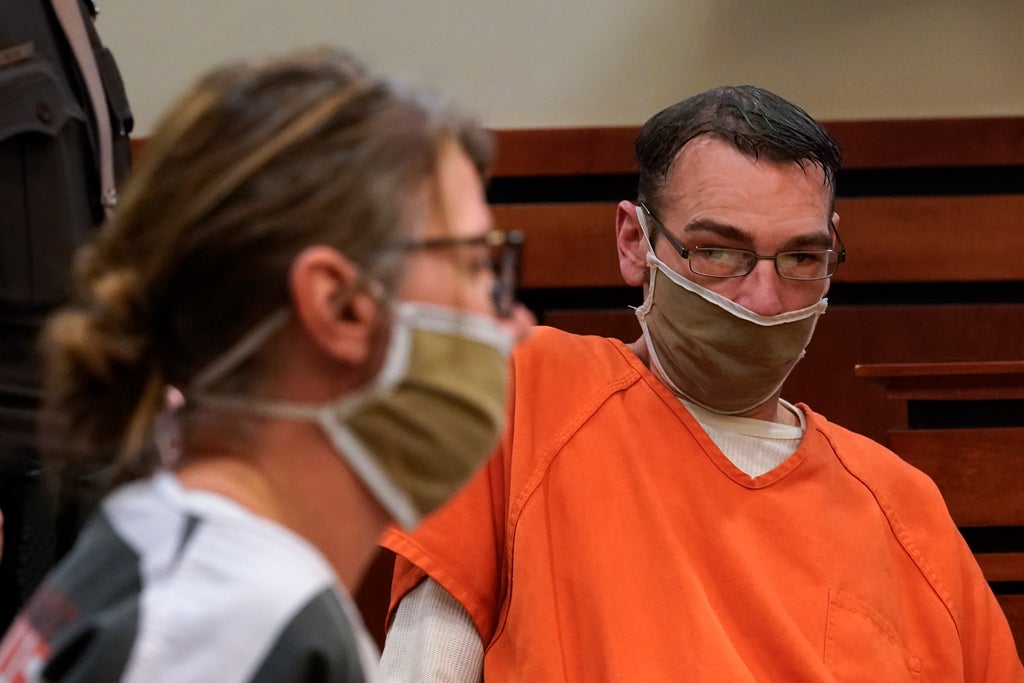 The panicked 911 call made by Ethan Crumbley’s father on the day of the Oxford High School shooting has been heard in court for the first time, with the 45-year-old saying he believes his son “took the gun” used in the massacre from their home.

James Crumbley is heard telling the dispatcher that he is “freaking out” after discovering a gun missing from his home and indicates his belief that his son could be the gunman.

“I think my son took the gun,” he is heard saying.

Mr Crumbley called 911 at 1.37pm on 30 November after news spread of a shooting rampage inside the Michigan high school where his 15-year-old son was a sophomore student.

The call was played in court on Tuesday during a preliminary hearing where a judge will decide if there is enough evidence to take the parents to trial for their alleged part in what was the deadliest school shooting in the US since 2018.

Ethan’s mother Jennifer Crumbley was seen breaking down in tears as the audio was played, with her attorney wiping her eyes with a tissue because of her shackles.

The Crumbleys are each charged with four counts of involuntary manslaughter over the deaths of four students killed in the massacre – Hana St. Juliana, 14, Tate Myre, 16, Madisyn Baldwin, 17, and Justin Shilling, 17.

The unprecedented move to charge the parents of an alleged school shooter came after prosecutors said the couple bought their 15-year-old son the gun days earlier as an earlier Christmas present, left it “freely available” to him and ignored multiple warning signs about his disturbing behavior in the lead-up to the shooting.

The day before the massacre, a teacher found Ethan searching for ammunition on his phone, according to prosecutors.

When school staff contacted his parents concerned about the incident, they failed to respond with Ms Crumbley instead texting him that he must “learn not to get caught”.

On the morning of the shooting, the Crumbleys were called into the school for a meeting with staff, counselors and Ethan after another teacher found him with a drawing of a shooting victim, gun and bullet and the phrase “the thoughts won’t stop, help me”.

Prosecutors said the parents refused to remove Ethan from the school and left.

Mr Crumbley referenced the morning meeting over his son’s behavior during the 911 call as he told the dispatcher a gun was missing from his home and his son was at the scene of the shooting.

“I am at my house. There is an active shooter situation going on at the high school,” he says in the call.

“My son goes to high school. I have a missing gun at my house. I need an officer to come to my house right away please.”

The dispatcher tells him she cannot send someone to his house right now because officers are dealing with “the active shooter situation”.

Parts of Mr Crumbley’s comments are unclear but he describes how he “raced home” after hearing reports of the Oxford High school shooting “just to like find out” if his 9mm Sig Sauer was missing.

“I have a missing gun and my son is at the school,” he says.

“And we had to go meet with the counselor this morning because of something that he wrote on a math paper and then I was in town and I saw a whole bunch of cops going somewhere.

“And then somebody told me that there was an active shooter and then I raced home just to like find out and I think my son took the gun.”

The dispatcher tells him she is going to have someone contact him soon and takes down details of what his son was last seen wearing.

Tuesday’s hearing also heard about several text messages Ms Crumbley sent to friends and colleagues on 30 November – both before and after she learned of the shooting.

Kira Pennock, a family friend who owns the stables where the Crumbleys kept their horses, testified that Ms Crumbley sent her a text saying her son “can’t be left alone” just hours before he allegedly opened fire.

Ms Crumbley told her she might bring the 15-year-old with her to the stables that evening because she feared what would happen if she left him alone after being called into the school over the disturbing drawing. Ms Crumbley also allegedly sent a photo of the drawing to Ms Pennock and to her employer of her Andrew Smith that day, telling the latter “this is what I’m dealing with”.

After news of the mass shooting reached the community, Ms Crumbley appeared to be most concerned about losing her job, according to text messages.

“I need my job. Please don’t judge me about what my son did,” she texted Mr Smith.

He told the court he was “surprised” by her concerns about her job given the situation at the time.

“I thought she’d be more worried about what was going on.”

The Crumbleys have both pleaded not guilty to the charges against them. The preliminary hearing will resume on 24 February.

Ethan has been charged as an adult with 24 counts including four counts of first-degree murder and one count of terrorism.

His legal team has revealed he plans to plead insanity.