Skip to content
Home News ‘I am not the Congress:’ Ketanji Brown Jackson pushes back on Republican attacks that she gives light sentences 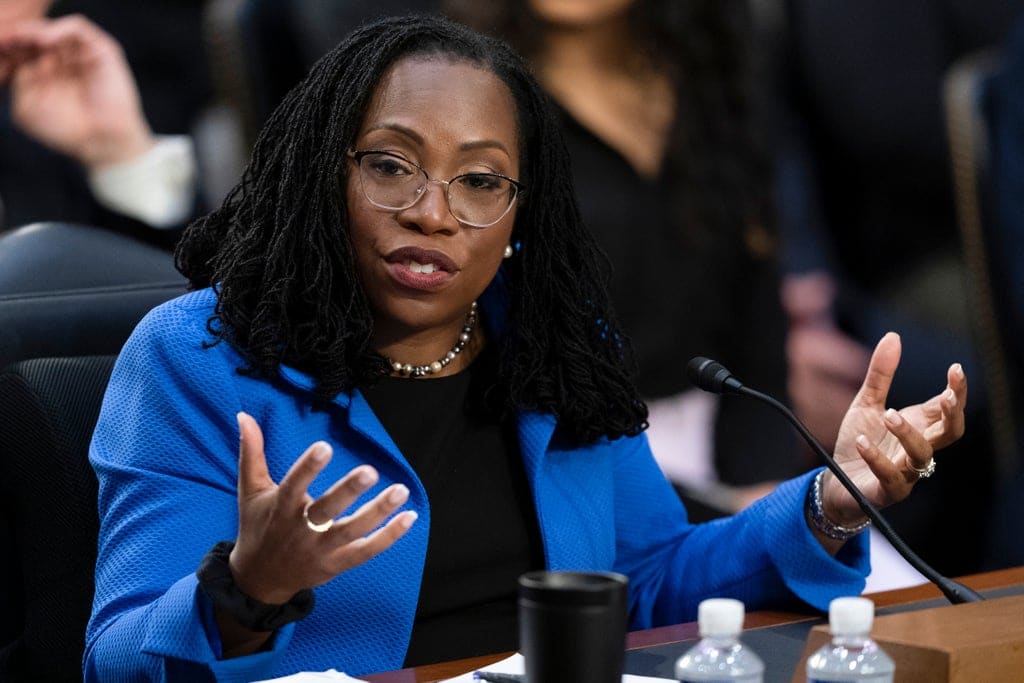 Throughout the confirmation hearings of the Supreme Court nominee Ketanji Brown Jackson, Republicans in the Senate have sought to portray the judge as “soft” on all manner of crime, including drugs and sexual offenses.

During one typical exchange on Tuesday, Arkansas Senator Tom Cotton repeatedly asked whether, in general, sentences should be stronger for fentanyl traffickers and for child sex image offenders.

Ms Jackson repeatedly answered that it wasn’t a judge’s place to speak generally about what punishments ought to be, but rather their role is to apply the rules Congress has set out on sentencing.

“It’s not that they are difficult questions, it is that they are not questions for me,” she said. “I’m not the Congress, I’m not making policy around sentencing. My job is to look at a particular case and decide what the penalty should be within the prescribed range of congress.”

Senator Cotton, during his questioning, argued that “a bunch of elite lawyers – whether they’re judges or federal prosecutors or public defenders or law professors – think that sentences for child pornography are too harsh. I don’t, and I bet a lot of normal Americans don’t either.”

During the hearings themselves, Mr Hawley grilled Ms Jackson about her ruling in the 2013 case of 18-year-old Wesley Hawkinswho was found with a laptop containing more than a dozen videos of graphic content involving young victims recorded in the teen’s home.

See also  Enrique Tenreiro: The artist who painted Franco's tomb alleges that he did a 'performance' for the reconciliation of the Spanish | Spain

Federal sentencing guidelines suggested 97 to 121 months in prison, though prosecutors only sought 24 months. Ms Jackson sentenced Hawkins to three months, as well as 73 months of supervised release, citing the high potential he might be abused in prison.

“That the guidelines in this area are not doing the work of differentiating defendants as the government itself indicated in this very case,” she said. “And so that’s what I was talking about, but I want to assure you, senator, that I take these cases very seriously…It’s about understanding the harm of this behavior. It’s about all of the other kind of restraints that sex offenders are ordered rightly to live under at the end of the day.”

The White House has defended its nominee to the Supreme Court and argued these kinds of questions are an “embarrassing, QAnon-signaling smear,” a reference to the conspiracy movement’s belief that Democratic elites are paedophiles.

Fact-checkers have noted that every Republican on the Senate committee now considering Ms Jackson’s confirmation voted to confirm Judge Ralph Erickson to the Eighth Circuit Court of Appeals, who sentenced defendants in 11 child sex abuse image cases to penalties below federal guidelines, as ABC News reported.

During Ms Jackson’s time on the US Sentencing Commission, which advises Congress, the group recommended in 2012 that sentences for sex offenses involving child sex abuse images be reformed because current law can “fail to differentiate among offenders in terms of their culpability,” meting out punishments that “are too severe for some offenders and too lenient for other offenders.”

For instance, there’s no mandatory minimum sentence for those who possess child sex abuse images, but there are minimums for those who receive it, transport it, or distribute it.

The recommendations were the unanimous product of the bipartisan commission, which included multiple Republican judicial experts at the time.