Skip to content
Home News “I am a precarious worker and I will be an even more precarious pensioner”: the voice of a home help assistant | Radio Madrid 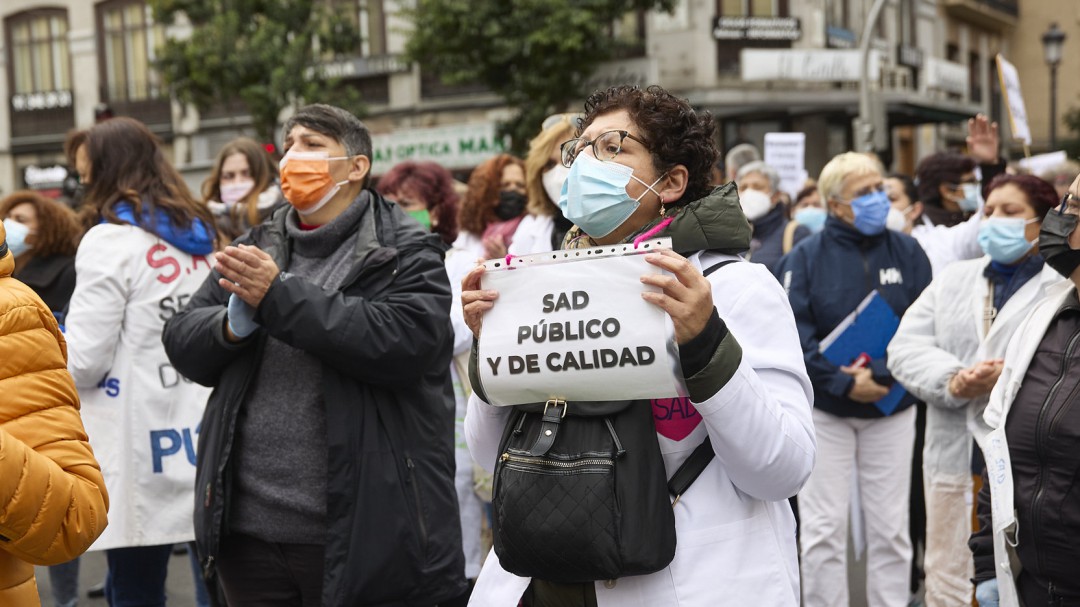 Teresa, Connie or Consuelo are just three of the more than a hundred home help workers who have demonstrated this Sunday in the Plaza de la Villa and in the Puerta del Sol to claim job insecurity, recognition as a professional disease of the accidents they suffer during their working hours, as well as to lower the retirement age from 67 years to 60.

Three thousand assistants, all of them depend on private companies that in turn go hand in hand with the Madrid City Council, and there are very few who earn more than 900 euros per month, since most of their days do not arrive at eight hours . They have contracts of 27, 30 and 36 hours a week. For a full-time assistant, the salary is 916 euros, a figure that remains at 820 if we talk about a 30-hour weekly contract. However, low wages are not the only reason for their protest, but they demand improvements in their working conditions, a claim that has been in Madrid for more than 20 days, since several assistants decided to camp in front of the Ministry of Labor, next to the Metro and Cercanías stop, Nuevos Ministerios.

“There are many abuses in our conditions,” says Connie. She suffers a meniscus wear, produced by a fall when she was running from one home to another, because, they say, they only give them three to five minutes to go from one home to another, when the distances require even fifteen. She went to private insurance, which is the one that has to cover her work accidents, but her accident was denied as a work accident and forced her to go to social security. “When I broke my hand while working, they asked me if I was knitting,” says Teresa in a conversation with Connie, who replies that she has been asked if “there were witnesses when the accident happened.”

Teresa prefers to talk about mental illnesses before physical ones. He tells us that it is much more important to heal his “chronic depression” than a hand sprain. “I have chronic anxiety because I do not make ends meet or on time for services,” confesses the assistant. But for her, the worst thing is the hopelessness of knowing that the rest of her life is going to be like this and that it will never get better. “I am a precarious worker and I am going to be an even more precarious pensioner.”

The retirement age is also a major problem for them: they do not stop working until they are 67 years old, with all the occupational risks that all those years worked entails. “We need the retirement age of 60 years because many of us are already in pain, there are colleagues who have herniated discs,” cries Consuelo, one of the workers who has demonstrated in Madrid.

A few, in addition to demonstrating, had been sleeping on the street since November 1, in front of the Ministry of Labor, so that Minister Yolanda Díaz could listen to them. Five days ago, fifteen days after the first of the nights they spent on the street, the assistants had planned to meet with the minister, who, instead of appearing, sent another person to listen to the workers. As a result of the management, the workers decided to continue sleeping on the street, with sleeping bags and mountains of blankets to protect themselves as much as possible from the cold and surrounded by banners in which they express their demands.