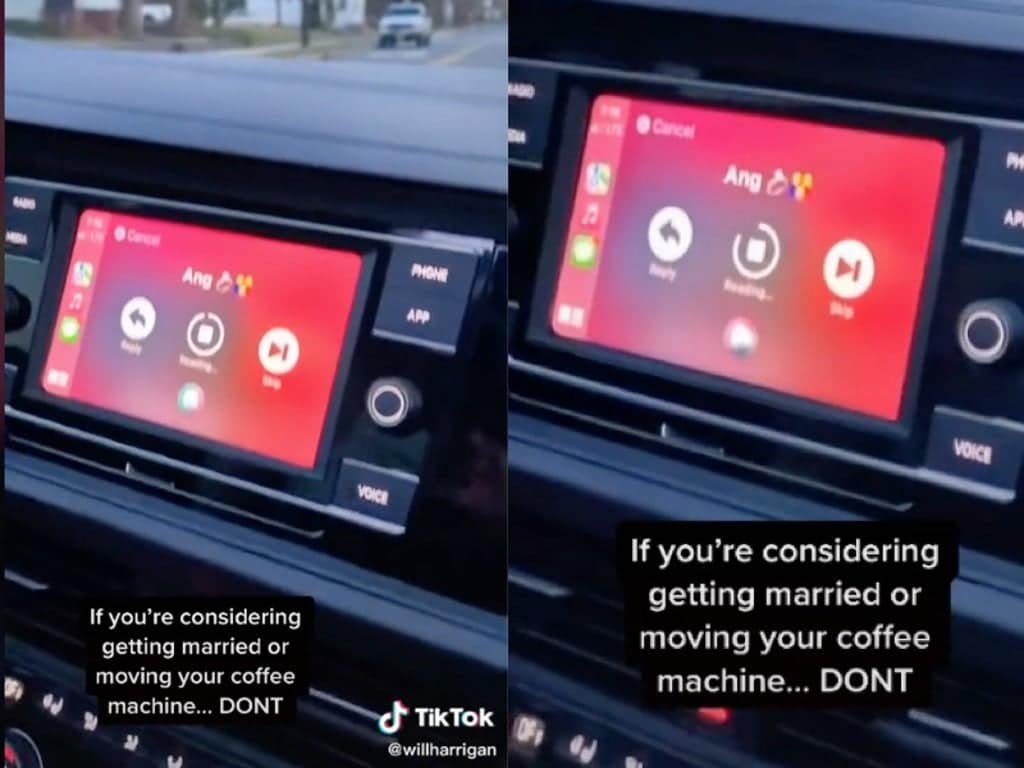 A man has sparked a debate about marriage after sharing a video of Siri reading his wife’s angry text message about the coffee machine through his car’s speaker.

Will Harrigan, from New Jersey, who goes by the username @willharrigan on TikTok, shared the video to the platform on Saturday, where it has resonated with some married individuals, while others have expressed concerns about the couple’s relationship.

In the clip, which he captioned: “If you’re considering getting married or moving your coffee machine… DON’T,” Siri reads a message from Harrigan’s wife Ang, who can be heard angrily criticizing him for moving the coffee maker, as she then proceeded to spill coffee grinds all over the freshly mopped floor when she tried to move it back to where it belongs.

“I just don’t understand what goes through your stupid, fat, f**king head, why did you need to move the coffee maker on the other side, why did you think that it belonged there?” Ang said in the message to her husband of her. “I just went to move it back where it f**king goes and the coffee grinds that you left in there to the coffee that you didn’t even f**king drink just went all over the floor that I just swept and mopped .

See also  Boy, 16, who was stabbed to death in the street was killed as part of a revenge attack by a gang of youths who followed him home, police believe

Siri’s reading of the irate message concluded with the virtual assistant asking whether Harrigan would like to reply.

“Don’t get married… or move your coffee machine,” Harrigan captioned the clip on TikTok, where it has since been viewed more than 13.9m times.

In the comments, viewers have been divided, with some finding Ang’s message to her husband amusing and relatable and noting that they are “on her side”.

“Team Ang. LOL. I’ve 100 per cent felt this rage and sent messages like this,” one person wrote.

Another said: “We’re on her side. You should’ve never moved it!”

“Honestly you’re at fault,” someone else wrote.

However, others found the behavior displayed in the concerning video, with some viewers questioning how the couple talks to and communicates with one another.

“Wow, is it ever acceptable for a partner to send a message like this? Seems like I’m not missing out at all being single,” one viewer commented, while another said: “Am I missing something here? How are this many people in the comments thinking it’s ever okay to speak to someone like this?”

Someone else claimed that they can “understand being angry” but that “this is NOT how you talk to your partner”.

“Or anyone for that matter,” they added. “This is not okay.”

According to someone else, the amount of people who sided with Harrigan’s wife over the video is “honestly alarming,” as they claimed: “You don’t talk to someone like this.”

In a comment left by Harrigan under the viral video, he joked that he was about to make his morning coffee before asking viewers to “pray for me”.

In a follow-up video shared on Monday, the TikToker appeared to address the comments criticizing his and his wife’s relationship by sharing a video of a dr dolittle 2 scene, in which Eddie Murphy asked whether he looked like he cared.

“When the weirdos in my comments take [my] and Ang’s funny arguments too seriously,” he captioned the video. “Time for my morning coffee.”