Hundreds of people turned out at the weekend for the first ‘mega meet’ of the year for controversial car fanatics group, the Lanarkshire Outlawz.

The petrolheads – dubbed “inconsiderate” due to their dangerous and reckless stunts – were due to meet at the Nerston Industrial Estate in East Kilbride on Saturday night, with a huge convoy expected to then head down the expressway to Hamilton.

However, it’s understood unforeseen circumstances led to the event being moved to the Palace Grounds Retail Park in Hamilton on Sunday evening, where the convoy of vehicles and motor enthusiasts gathered.

It is not yet known if group members carried out their trademark manoeuvres, such as ‘static to burn outs’ and ‘drag racing’, whilst there.

“We will be holding our first big meet of 2022 on April 9 in East Kilbride.

“We will be meeting at B&Q in East Kilbride from 6.45pm onwards and will then leave around 10.30pm to head to Hamilton to MFI where all the fun starts. 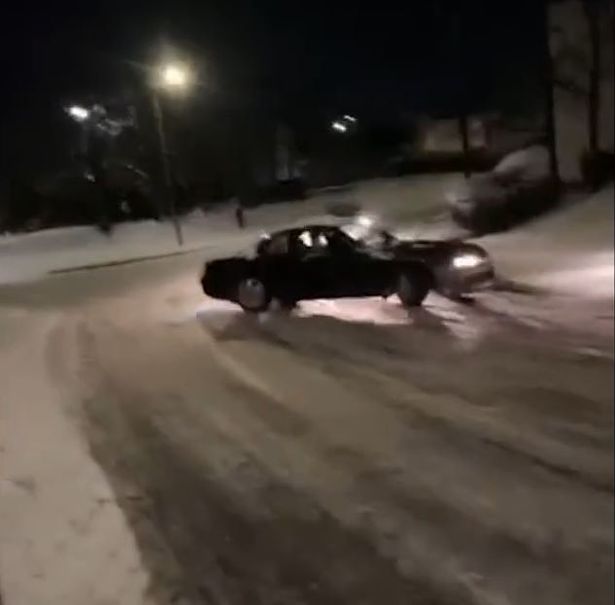 “There will be people walking around looking at cars so just be mindful when coming in and out of the car park as don’t want anyone hurt.

“Can we all take our rubbish away or put in the bins that are provided around the car park.”

The post had attracted over 75 likes with over 200 people showing their interest in attending the event.

“Spread the word let’s get it bouncing since it didn’t get in last night.”

A post later read: “We’re in now not be stopping us.”

We told you back in January how a video of members of the group carrying out a snow drifting stunt had been blasted, after motorists were filmed skidding close to onlookers.

Police hit out at the reckless car enthusiasts after footage of them drifting at speed in the snow appeared on social media.

It took place within the Kelvin Industrial Estate during the severe weather which hit the town at the start of the year.

The video was posted on the group’s TikTok account and had been viewed more than 3200 times.

In the clip, a large crowd of people could be seen gathered on Carron Place to watch the motorists drifting in the icy conditions.

Some cars performing the wild maneuvers at speed were convertible cars with their roofs down and were spotted skidding just yards from people standing in the street.

Don’t miss the latest headlines from around Lanarkshire. Sign up to our newsletters here.