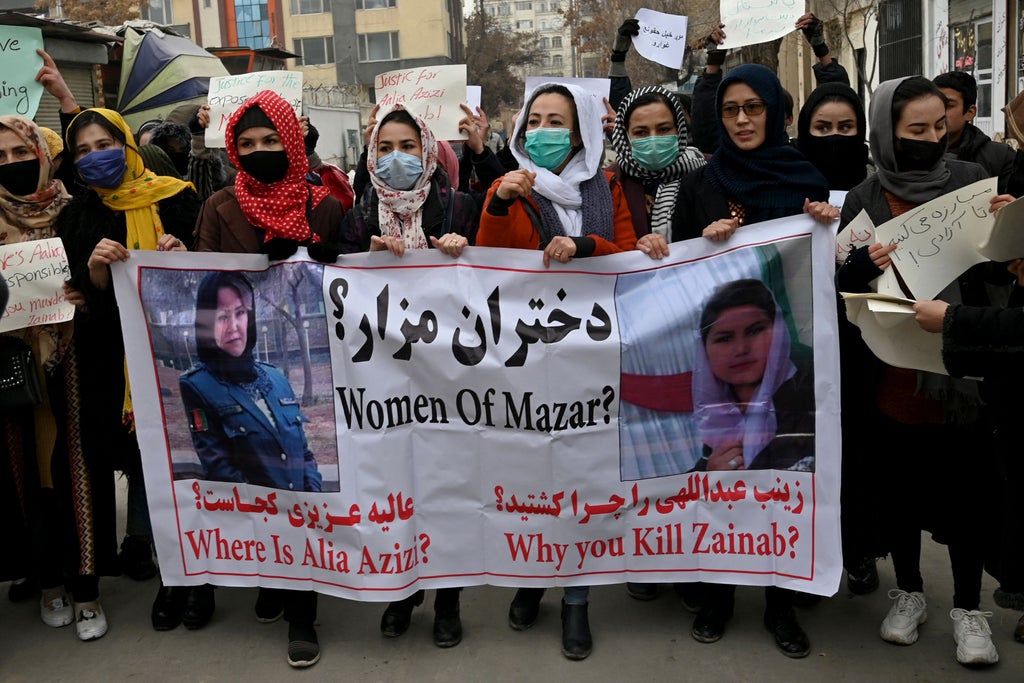 Hundreds of Afghan women’s rights campaigners have urged US President Joe Biden to take action over the killing and forced disappearance of Afghan women since the Taliban rose to power.

Writing a letter, seen by The Independentexactly six months after the American embassy in the Afghan capital of Kabul was evacuated and the Taliban seized power, activists urged Mr Biden to pledge to safeguard women and girls from violence around the world by way of a global treaty.

The letter, which was signed by more than 220 Afghan women’s rights defenders, as well as ex-members of the Afghan parliament, detailed how the Taliban attacked a women’s march in Mazar-e-Sharif, a large city in northern Afghanistan, back in Sept.

“Women protestors they took into custody were reportedly severely tortured and repeatedly gang-raped,” the letter states.

The letter also refers to foreigners coming to Afghanistan to “have women as property”, and young women being sent to neighboring countries to be “used as sex slaves”, without providing any further details.

“In the face of this staggering violence, Afghan activists continue to take to the streets and call on the Taliban to respect women’s rights. This bravery is breathtaking. An international framework drawing a clear line on violence against women and girls will provide activists with critical support,” the letter says.

The Taliban has launched a serious crackdown on women’s basic rights since seizing power of Kabul in mid-August as the US and British forces withdrew. The hardline Islamist group has blocked women from the workplace and secondary education, as well as barring them from taking part in all sports.

A global agreement or treaty tackling violence against women and girls is the “best chance” to ensure safety for Afghan women and girls, according to the letter to Mr Biden, which will be delivered on Tuesday.

“As you know, many Afghan activists were forced to flee the country last summer after the US withdrawal for fear of retribution,” the letter says. “Scores of advocates have been forcibly disappeared or killed, wiping out a generation of leadership in six short months.”

The letter adds: “We have lost loved ones, our homeland, and fellow women’s rights activists. Our wish is for you to champion the campaign for a new global agreement on violence against women and girls.”

Judge Najla Ayoubi, who was the first female judge in her province in Afghanistan, told The Independent: “As long as the Afghan women and girls are used as bargain chips for the Taliban to fulfill their demands, the conscience of the world should not sleep soundly. We all have a collective duty to respond to this scourge. A global problem merits a global solution.”

Signatories argued Mr Biden is “uniquely placed” to lend his backing to a treaty helping women – adding that the president was previously “fighting for the US Violence Against Women Act”.

“Your subsequent work on the International Violence Against Women Act speaks to your understanding of the distinctly global nature of this issue,” the letter adds.

“Presently, the campaign for a global agreement on violence against women is gaining momentum. As the treaty-making process progresses, the Taliban will face increased international shaming, ostracisation, and pariahdom if they resist recognizing women’s right to be free from violence.”

The letter is signed by men and women, with signatories including Fawzia Kofi, the first woman to be Vice President of the Afghan Parliament, Spozhmai Wardak, Former Deputy Minister of Women’s Affairs, as well as others who previously served as senior Afghan officials.

Campaigners noted around 15 per cent of the signatories chose to not reveal their identity due to the “immense security risks” faced by Afghan activists.

Since coming to power in mid-August, the Taliban have imposed widespread restrictions on women and girls in Afghanistan.

They have been banned from many jobs, ordered to wear the hijab, and had their education largely restricted beyond the age of 12.

Women’s rights activists in Kabul have staged a series of protests against their rights rollback under the Taliban, and reports have suggested that dozens of Afghan women and their families have been detained in recent weeks.

The Taliban have repeatedly denied arresting and detaining women, but say authorities have the right “to arrest and detain dissidents or those who break the law”.