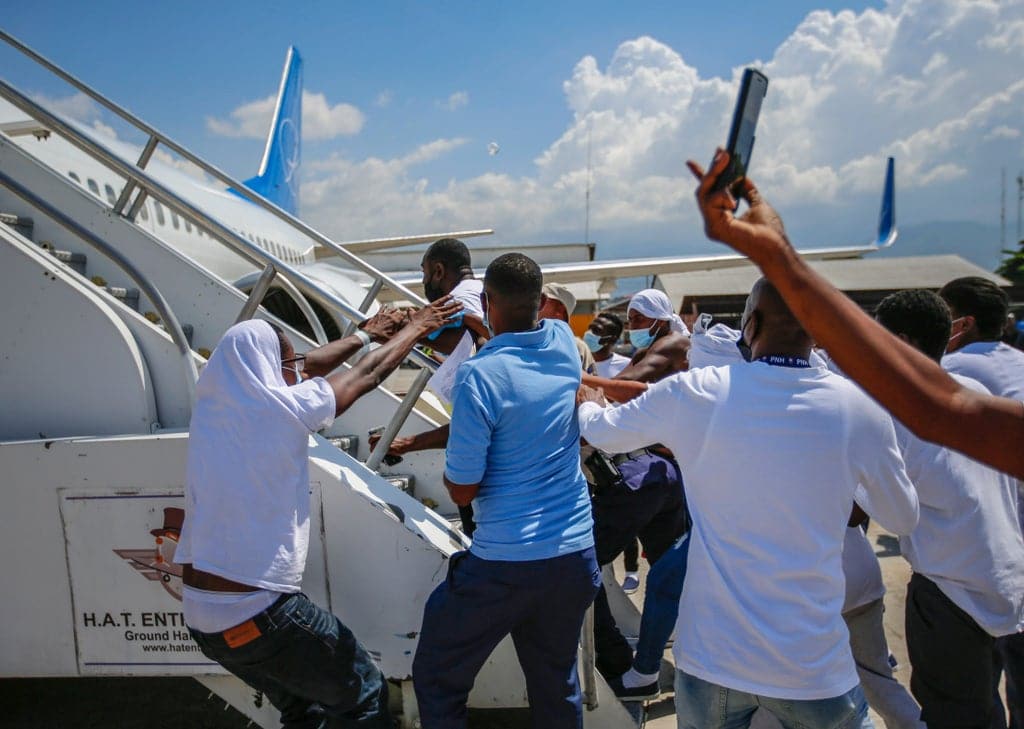 Human Rights Watch released a report Thursday demanding the US and other countries stop deporting Haitians to their homeland, calling it “unconscionable” and warning that they are putting people’s lives in danger.

More than 25,700 people have been deported to Haiti from January 2021 to February 2022, with 79% of them alone expelled by the US, according to the International Organization for Migration.

“Haitians and their children, many born abroad, are being returned to a country in chaos,” said César Muñoz, senior Americas researcher with Human Rights Watch, a nonprofit organization based in New York.

Haiti’s turmoil deepened significantly in the past year with inflation, kidnappings and violence spiking as the country tries to recover from the July 7 assassination of President Jovenel Moïse and a 7.2 magnitude earthquake that struck in mid-August, killing more than 2,200 people and destroying or damaging tens of thousands of homes. Jobs also have become even scarcer in a country of more than 11 million people where 60% of the population makes less than $2 a day.

In addition, gangs have grown more powerful amid ongoing political instability, with reported kidnappings soaring by 180% and homicides by 17% in the past year, according to a report by the United Nations Security Council. An estimated 19,000 people have lost their homes due to gang violence, and many are still living in temporary shelters in extremely unhygienic conditions.

“Port-au-Prince is now hell,” said Cassandra Petit, a 39-year-old mother of two whose partner was killed last year when he went back to the home they had fled amid ongoing gang to violence retrieve clothes and school backpacks for their children. “He never returned.”

She is now staying with her former partner’s cousin and tries to make some money by selling used clothes, but “it’s not every day that you make a sale.”

“When I come back, I don’t know what the kids will eat in the evening,” she said. “I start to cry before I make it to the house.”

The UN’s Food and Agriculture Organization recently reported that some 4.5 million people across Haiti require urgent assistance given a severe lack of food.

Muñoz said no one should be deporting people to Haiti given those conditions.

“It is unconscionable that any government would send people to Haiti while it experiences such a deterioration in security and a heightened risk to everyone’s life and physical integrity,” he said.

He also decried a public health law known as Title 42 created under former US President Donald Trump that the administration of US President Joe Biden has used to quickly expel Haitians and fly them to their homeland, barring them from trying to seek asylum in the US Most of the Haitian migrants detained in recent months along the US-Mexico border in Texas have been deported under that law.

Muñoz also noted that there is no system in place in Haiti to track or help sports, and that civil society members have told Human Rights Watch that sports are at risk of being kidnapped because gangs think they have money for travel or relatives abroad who can pay ransoms.

The arrival of thousands of sports puts an even bigger strain on resources that already were severely limited in Haiti. Many had left the country years ago as they fled an economic crisis that worsened in the aftermath of a 7.0 magnitude quake that struck in 2010, killing an estimated 300,000 people. Many of them lived in countries including Chile and Brazil before trying to reach the US as the pandemic dried up jobs.

See also  All the changes of the new Highway Code for cyclists, drivers and pedestrians from next weekend

Among those trying to survive Haiti’s deteriorating situation is Jertha Marie-Paul, 61, who lived for nearly half a century in the Port-au-Prince community of Martissant — ground zero for warring gangs — before the uncontrolled violence split up her family and forced her to move. She now stays at a friend’s house where she sleeps in a corner on a flimsy foam mattress.

“I’m living in conditions that I’ve never lived before in my life,” she said, adding that she even has to buy buckets of water for 10 gourdes (nine US cents) each because the utilities don’t work. “Nothing is easy around here.”