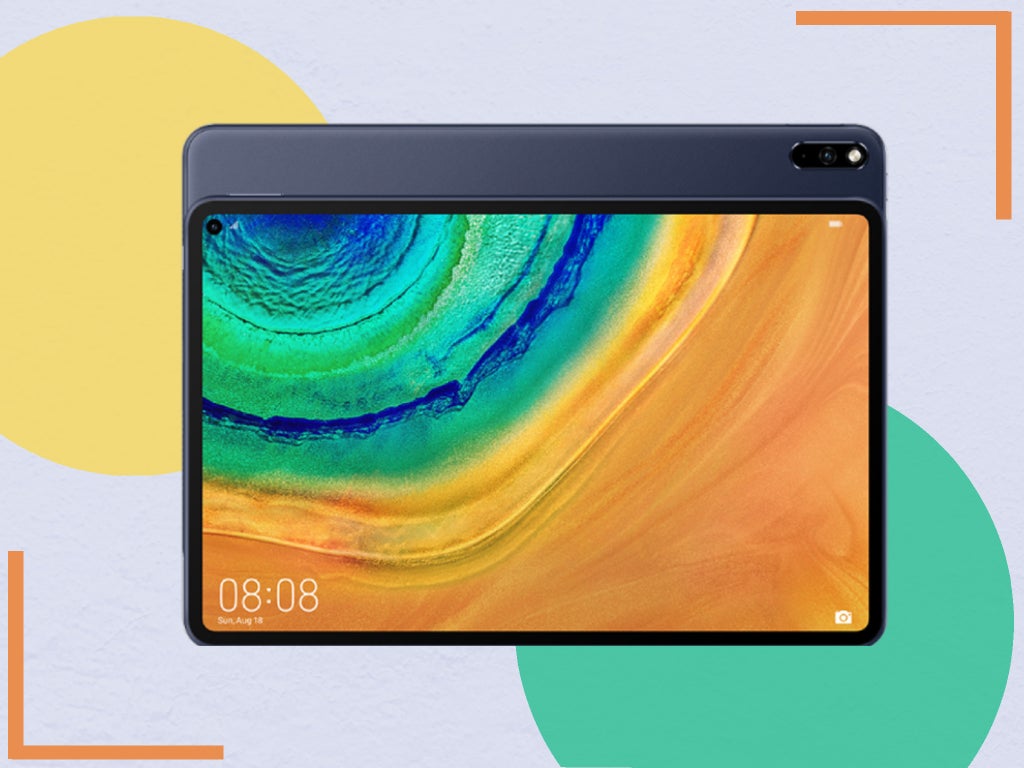 Attractive and classy, ​​the matepad pro looks and feels good. The build quality is excellent, something that’s common to Huawei products, and is on a par with that found in Apple and Microsoft devices. It’s a slim gadget, just 7.2mm thick, and light too, coming in at 460g.

The matte-finish midnight gray case and glossier edges blend happily with the display, and there are only two buttons, a power button on the short edge and volume rocker on the long. There are two speakers on each end, a USB-C socket on one short side and a sim tray on the long side are the only other interruptions to the design’s edge. You might have noticed there’s no 3.5mm headphone jack – like on some iPads, there’s no headphone connector.

On the back, there’s a 13-megapixel camera, flash and the Huawei logo, plus an indication that the speakers are made by Harman Kardon. There’s nothing wrong with the camera, but the ergonomics of a tablet don’t make for a good photographic experience, except in one way: it’s great for framing your shot on the 10.8in display. Even so, other cameras (in a phone or a standalone camera) are better.

Huawei’s skill has been to create a tablet that’s business-like and smart without being dull-looking. Where some phones and tablets have fingerprint sensors next to the display, or even buried in the display, Huawei has neither, instead using password entry as well as using facial recognition via the camera. This works very reliably and quickly – an intimate and effective system.

This works well, but as always, wireless charging is much slower than wired. It makes up for that though in terms of convenience. If it’s on your desk, you can simply pick it up to use it, with no need to unplug it each time. It sounds like a small change but it makes a noticeable difference.

A keyboard accessory, sold separately, attaches magnetically to the back of the tablet and turns it into a substitute laptop. Though the keys are not as sumptuous as the Apple magic keyboard for the iPad pro, this is a useful and effective extra, as is the stylus which can be used for writing and drawing on screen.

One other thing: all tablets have Wi-Fi connectivity. A very few, most of them iPads, also come with cellular connectivity so you can connect to the internet with a sim card on board. Apple charges a significant price premium for this extra flexibility though. However, the matepad pro comes in two flavours, wi-fi only or wi-fi plus LTE, and both cost the same price, £399.99.

At 10.8in, the display is bigger than on the iPad and just a touch smaller than the iPad air (10.9in) and iPad pro (11in and 12.9in). It’s bright and detailed, with plenty of contrast and deep black hues.

Even so, unlike Samsung, which uses OLED technology in some of its tablets, this is a regular LCD. And although it doesn’t have the miniLED backlighting found on the 12.9in iPad pro, this display looks great, whether you’re using it for web browsing or video playback.

The bezels around the display are narrow, which is why the camera is embedded in the screen, but this is easy to forget as you become thickened in whatever you’re watching.

Huawei, like Apple, designs its own processors, and the Kirin 990 in this tablet is very fast. It ensures everything you do is instant, there’s no dawdling and it never keeps you waiting. The 128GB storage on board is more than enough to be useful, and the 6GB of RAM is one of the reasons there’s plenty of oomph in this tablet.

Video playback is smooth, games are judder-free and satisfying to play. Similarly, audio through the four Harman Kardon speakers is very good: punchy and vibrant.

Battery life on the tablet is more than enough. Like the iPad, there’s enough juice to last for as long as you want or to use it across several days (it’s probably around 10 hours in total).

Huawei’s version of Android, on its phones and tablets, does not have access to Google services such as Gmail, Google Maps and the Google Play Store. On the phone, this can be a problem, but it’s less evident on a tablet.

Huawei has its own apps, of course, such as a competent email app which works with Gmail accounts, and its own mapping app called Petal Maps. This is excellent, not least because it has been developed in conjunction with TomTom.

The Huawei take on Android also includes Petal Search which is good at finding safe and effective ways to find more apps. Even so, there are gaps, which some will find annoying.

Huawei’s tablet is highly capable, with accomplished hardware that looks great and works well. It has fast performance, enough to ensure that it continuously feels slick and effective. As far as Android tablets are concerned, this one is excellent.

Except for one thing: it lacks Google Mobile Services which means some familiar apps, and the Google Play Store, are missing. If this isn’t an issue, and it’s certainly less of a problem than it might be on a phone, then the Huawei matepad pro is hard to beat.