Skip to content
Home News How to best use paid time off from work, according to a leadership expert 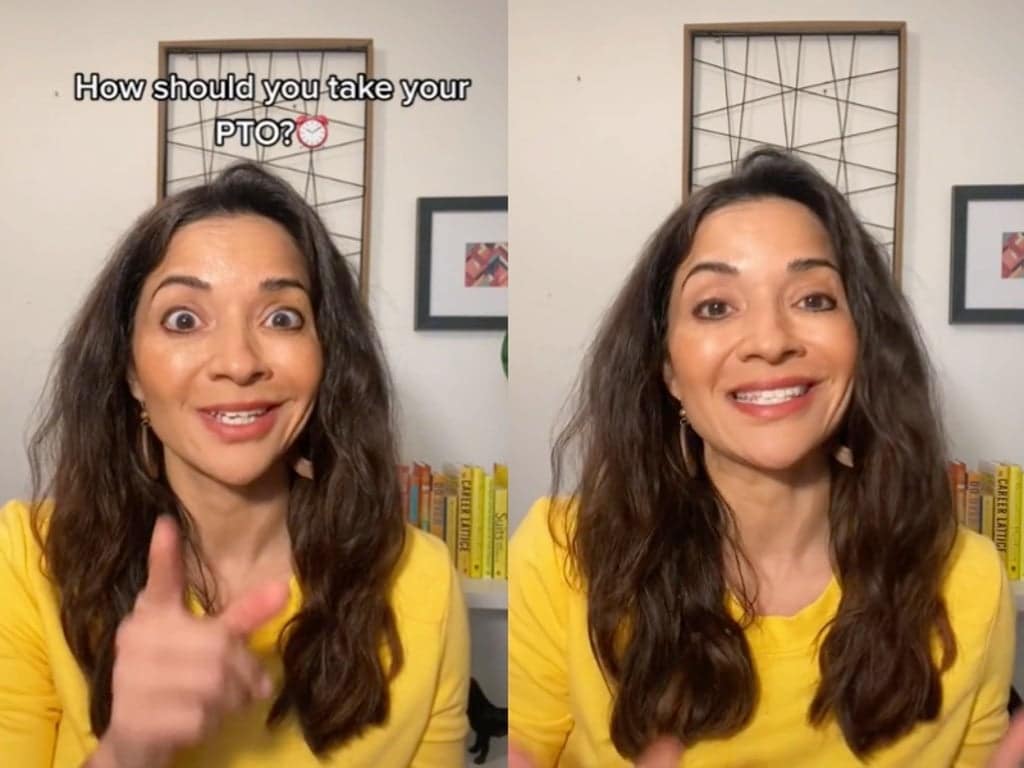 A leadership and self-advocacy expert and author has shared some of her tips for using paid time off, including why workers shouldn’t “justify” their days off work to their employers.

Selena Rezvani frequently uses her platform on TikTok to share her advice regarding corporate culture and self-advocating in the workplace.

In one video posted last month, the leadership speaker and consultant addressed the topic of paid time off, and how she believes it can be most effectively used.

According to Rezvani, who revealed that, “for years, [she] took her paid time off all wrong,” the first thing employees should do is “regularly take your PTO,” as it creates a precedent that they will be taking time off.

“There’s no medal you’ll receive for not using it, and, by taking it regularly, you train your manager to see it as this consistent, natural occurrence, and not some freakishly odd, rare event,” she explained.

Rezvani also shared her advice for notifying one’s company about any paid time off they plan to take, with the expert encouraging her followers to “keep it simple” and avoid “justifying it”.

“Don’t justify it like, ‘My kids need to go to the eye doctor’ or ‘I’m helping my mom clean out her doll collection,’” Rezvani said, as she explained that giving an explanation sets a precedent “that you’ll share your whereabouts every time you use PTO” and you “shouldn’t have to do that”.

For her final tip, Rezvani urged workers to take their paid time off even when the response from their employer is not be completely supportive, as it is important to remember you are owed this time.

“Take your PTO even though the response may not be great,” she instructed. “Just because you expect some resistance or pushback doesn’t mean you shouldn’t take time off.”

Rezvani noted that she often tells people it is “never a great time and it’s always a great time to use PTO”. “Don’t wait for ideal conditions, do it anyway,” she concluded.

The video, which has been viewed more than 1.8m times, was met with supportive replies from viewers, who were inspired by Rezvani’s advice.

“I’m going to take my PTO from here on out,” one person wrote. “Enough is enough, the work will always be there when I get back.”

Another person commented: “Thanks, I tend to always feel I have to justify and inform of my reason for taking it. I gotta stop doing that.” The comment prompted a response from Rezvani, who revealed that she has also felt the same way, but that “saying it like a short sentence gets easier”.

Others revealed that they often employ the tactics outlined in Rezvani’s TikTok, with one person noting that they leave details about their PTO blank because “it’s none of their business”.

“Amen! I stopped adding detail. It’s my time!” someone else wrote.

speaking to The IndependentRezvani also discussed the idea of ​​“stockpiling” all your PTO, which she noted “doesn’t help your wellbeing”.

“While some people argue there’s a literal payoff to cashing out your PTO when you leave a job, by the time taxes are taken out (and by running the risk of being burned out), I’d argue the majority of PTO would have been better spent being taken throughout the year,” she explained. “Plus, only about half of the 50 states have statutes that actually require companies to pay out employees’ unused PTO when the employment relationship ends.”

Rezvani also referenced studies that show “when we take time off regularly, we have better health, stamina, and engagement at work” as an important reason for taking paid time off on a regular basis. “We actually perform better and work harder!” she added.

If you don’t have a lot of PTO to work with, she recommends employing the commonly used technique of taking just one day off on an already short week, such as when it’s a federal holiday, as the additional day “gives you a longer period off and a shorter workweek to look forward to”.

“Spread days off periodically throughout the year so you always have something to look forward to,” she advised. “You might even use the day off to look for companies that do offer PTO – remember, we’re in an employee’s job market.”

In a follow-up video, Rezvani addressed some of the comments she received from viewers who asked for advice on how to handle situations where their employers do not respect their time off.

“Lots of you said: ‘What if my manager doesn’t value my time off? What if they call me on my day off?’” Rezvani began, before claiming that there are a “few good habits” that employees can use when faced with these situations.

According to the leadership expert, the first habit is to send a recap to your manager before your day off, and “set expectations up front”.

“You could say: ‘Knowing I’ll be out of the office Tuesday and Wednesday, here’s who is covering my projects while I’m unavailable, and who will be the point of contact for me. After this message, I will be offline and I will be back Thursday,’” Rezvani recommended.

Rezvani said it can also be useful to explicitly state whether you want to be contacted on your day off, with the expert suggesting that employees can ask their managers to “only reach out if there is a true emergency”.

“And last, if you still get the call on your day off, and it’s becoming a habit or disruptive to you, tell them you’re busy. Let them know that you have reserved that time for other things,” she said.

speaking to The IndependentRezvani noted the importance of remembering that PTO is a “benefit you and your employer agreed was yours,” and that “your time off is precious and it’s yours to use”.

“The reality is, it’s usually never a good time to take it,” she added. “There will always be demands waiting, so don’t wait for the perfect conditions.”