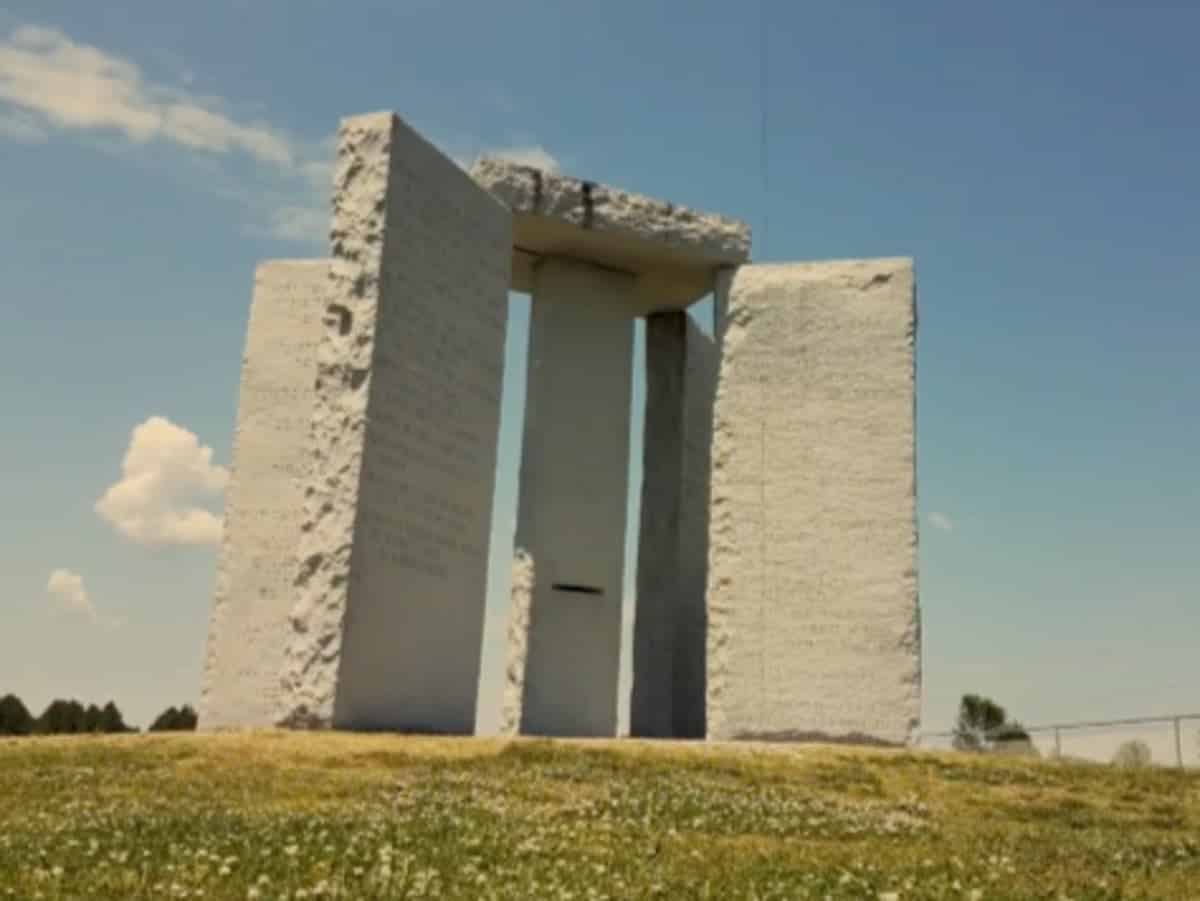 The monument, which was targeted in the early hours of Wednesday morning, consists of six massive granite slabs, onto which are inscribed a list of 10 instructions for the conservation of humanity in the event of an apocalyptic event.

The guidestones were erected in 1980 and have stood as an oddity in a field in Elberton, Georgia ever since. The GBI has confirmed that the destruction of one of the slabs was most likely the result of an explosive device.

But why would someone try to blow up an apparently innocuous monument?

Unlike other strange and seemingly inscrutable oddities — like the Toynbee Tiles or the mysterious monolith that was discovered in Utah in 2020 — the slabs have been a source of controversy for years.

Opposition to the stones began almost as soon as they were unveiled. According to the BBC, one of the 100 people who attended the unveiling, a local pastor, immediately began circulating his theory that the stones were built for cult and devil worship based on its similar appearance to Stonehenge.

Since then, religious conservatives fearing a “new world order” have cast suspicion and scorn on the monument, both for its likeness and for its message.

On each side of the stones the words “Let these be guidestones to an Age of Reason” is etched in eight languages ​​— English, Russian, Mandarin Chinese, Arabic, Classical Hebrew, Swahili, Hindi and Spanish — along with its cryptic instructions for rebuilding the world.

See also  Passengers warned NOT to travel amid Storm Franklin

The instructions are as follows:

Certain instructions — like keeping the world population below 500m or guiding reproduction — have led critics to claim the stones are calling for eugenics or genocide.

Further fueling the conspiracy hysteria around the stones are their mysterious provenance.

The guidestones were commissioned in 1979 by a “small group of loyal Americans” through a man who used a pseudonym.

The owners of Elberton Granite Finishing Company, which was commissioned to build the slabs, said the anonymous man claimed the monument was meant to act as a compass, calendar and clock that could withstand catastrophic events.

The company claims it tried to discourage the man from pursuing the project by offering a comically inflated price for the project, but were surprised to find the individual accepted the quote.

Over the years the stones have been defaced numerous times, often by paint, but Wednesday’s attack caused the worst damage the monument has ever sustained.

Just two months before the attack, a gubernatorial Republican hopeful named Kandiss Taylor posted a video to her Twitter account calling for the demolition of the monument via her “executive order #10.”

Ms Taylor, who echoed former President Donald Trump’s 2020 election conspiracies, later drummed up some of her own after she was smashed in Georgia’s gubernatorial primary by incumbent Brian Kemp.

In a glossy campaign video, she had announced her “executive order 10,” which would see the monument demolished.

Throughout the video she nods to other conservative talking points and conspiracy theories.

The video starts by citing a Covid-19 vaccine conspiracy, with Ms Taylor saying “over four million people got injected with something that took only nine months to create. Ask yourself why.”

It then moves onto demonic human sacrifice.

“Human sacrifice was a form of demonic worship, we’re still doing it in present day by killing our unborn,” she says, while a graphic about the number of abortions performed worldwide splashes across the screen. “It’s the same demons, the same sacrifice, the same sin, it’s just a different time.”

Then she shifts focus to the “new world order” and the insinuation that the Georgia Guidestones are a message from the demon-worshipping elite who secretly rule the world as to their plans.

“The New World Order is here and they told us it was coming,” she says.

Shortly after news broke that the stones had been damaged, rather than denouncing the destruction of private property by a protester — which is standard for most Republicans — she suggested that God struck down one of the stones.

She later retweeted someone who claimed God was acting on Ms Taylor’s platform of “Guns, Babies, Jesus” by blowing up one of the guidestones and directing the Supreme Court to strike down Roe v. Wade and to make conceal-carry gun laws easier in the US.

Adherents of the QAnon conspiracy theory were quick to roll the guidestones into their ever-expanding web of delusion.

One man, posting on Twitter, pointed out that the guidestones were “exactly 666.78 miles from the UN Headquarters in NYC.”

“This is NOT a coincidence,” they wrote, before quoting a QAnon influencer named “QAnon John.” “[They] are obliged to show you who exactly [they] are. It’s been right in front of our faces the whole time.”

Another conspiracy theorist on social media claimed the guidestones lay on the “33rd parallel” before linking it to George W Bush and the Yale secret society Skull & Bones.

Alex Jones, perhaps the best known public conspiracy theorist of the modern age, said seeing the stones destroyed made him happy on an “animal level,” but said he ultimately disagreed with their destruction, as he believes they must stand as a reminder that the Illuminati is out there pulling strings. Conspiracy theories claim the Illuminati is a cabal of powerful figures secretly running the world for their own purposes from behind the scenes.

“We need that evil build there as a confession letter led by a consortium of eugenicists,” he said.