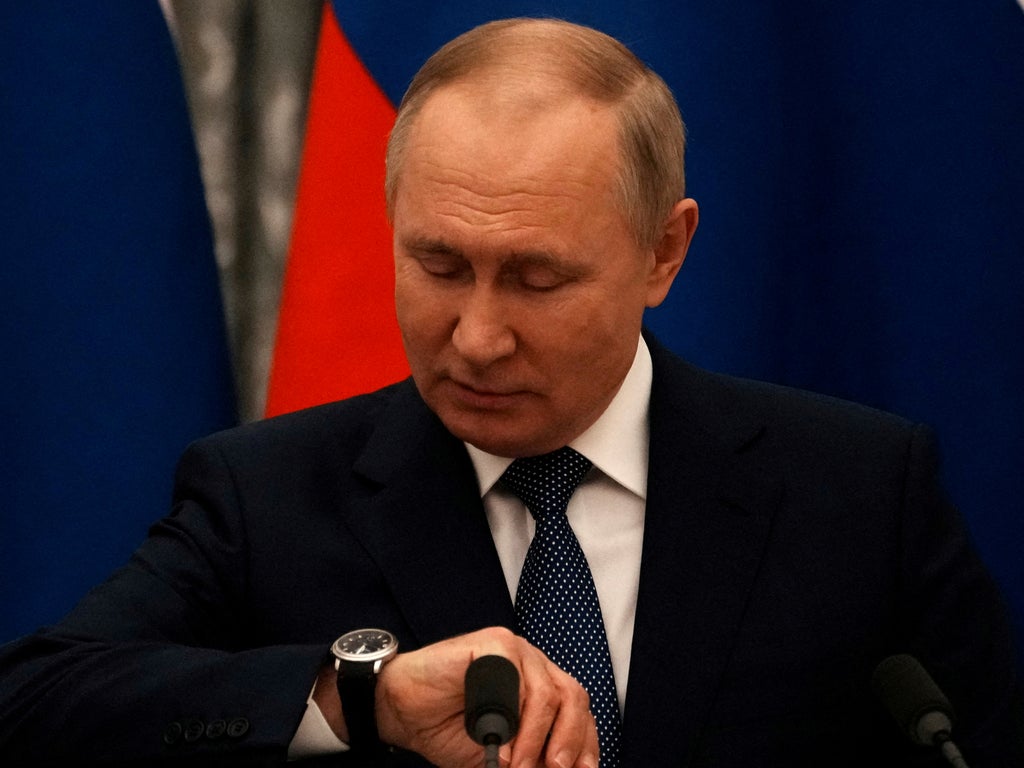 The Biden administration hopes its threat of “severe economic consequences” deters Russia from invading Ukraine – an event Americans officials say could be imminent.

In response, the US said it may ban the export of microchips and other technologies to critical sectors like artificial intelligence and aerospace and freeze the personal assets of Russian President Vladimir Putin, among other sanctions. Meanwhile, the Senate is preparing its own “mother of all sanctions” – such as against Russian banks and government debt – that could take effect even if Putin ultimately stands down from a military confrontation.

The US and its allies have been stressing – as seen in President Joe Biden’s February 7, 2022, meeting with the German chancellor – that they are united on the consequences for Russia should it invade. But Russia has something that may undercut that solidarity: a network of European countries, Germany in particular, dependent on it for energy exports, especially natural gas. That may make them reluctant to go along with severe US sanctions.

This dependency didn’t happen overnight. And as I’ve learned while working on a book on US economic warfare against the USSR during the Cold War, this issue has tended to divide America and its allies – in part because of how Russia has exploited the ambiguity of its intentions.

The US has long speculated about Russian willingness to use trade to tie the hands of other countries — a concern dating back to the early days of the Cold War.

For example, in the late 1950s and 1960s, as the USSR and the US were competing for postwar hegemony, each side tried to influence countries not formally aligned with either superpower. Some American analysts warned of a “Soviet economic offensive.” This included Soviet efforts to use favorable trade deals and other economic assistance to Warsaw Pact countries and neutral targets like Finland, the United Arab Republic and India in a manner that created sustained dependence on Moscow, possibly enabling future Kremlin coercion.

Other analysts disagreed and Soviet thought trade was largely motivated by economics. So did American allies – especially Britain – which resisted American calls to restrict strategic trade with the Soviet Bloc and other efforts to curb their Soviet trade prospects.

These different perspectives demonstrate the ambiguity of Soviet intentions. Given the Cold War rivalry and the USSR’s status as a centralized, state-run economy, Moscow’s motives were not clear.

As the Soviet Union began developing oil and gas pipelines to Europe, European energy dependence on Russia became a particular concern in Washington.

In the 1960s, Western Europe only imported 6% of its oil from the Soviet bloc. But a new planned oil pipeline – running all the way from the Russian far east, through several European countries including Ukraine and Poland, and ending in Germany – suggested the Soviets hoped to change that. The prospect of greater dependence, as well as other strategic concerns, raised alarm bells in Washington.

In 1963, the Kennedy administration attempted to stall construction of the Druzhba, or “Friendship,” Oil Pipeline by pushing an embargo on wide-diameter pipe to Soviet-aligned countries. Knowing it could not stop the project alone, it pressured allies – especially West Germany, a major pipe exporter – to join.

In 1981, the Soviet Union was building a natural gas pipeline from Siberia to Western Europe. Seeing it as another threat, the Reagan administration tried to persuade European allies such as France and Germany to join its embargo of not only pipeline equipment for the project but financing too. They refused, and the US responded with sanctions intended to prevent European companies from providing money or equipment to the project.

The gambit sparked an intra-Western crisis, sowing division between the US and Europe, and resulting in a sanctions retreat just a few months later. The pipeline was completed in 1984.

The consequences of energy dependence on Russia began to manifest itself after the Soviet collapse in 1991 and the rise of Vladimir Putin a decade later. Unlike his Soviet predecessors, who refrained from shutting off energy exports, Putin has shown a willingness to conflate economic and geopolitical objectives in Russian energy policy, applying timely pressure on neighbors that he justifies in market terms.

In the mid-2000s, for example, Ukraine was still receiving the same heavily subsidized gas shipments from Russia as it did when it was part of the Soviet Union a few years earlier. The “Orange Revolution” near the end of 2004 led to the ouster of a pro-Kremlin leader, replacing him with one who sought closer ties with the West. A year later, Gazprom demanded Ukraine pay full market rates for its gas. When Ukraine refused, Russia restricted the flow of gas through the pipelines – leaving only enough to fulfill its contracts to countries in Western Europe. To many observers, the move seemed aimed at destabilizing the pro-Western government in Kyiv. It was also later used as the basis for claims that Ukraine was an unreliable gas transit country, which helped build support for a new pipeline named Nord Stream that directly channeled gas from Russia to Germany.

That pipeline opened up in 2011 and resulted in the annual loss to Ukraine of $720 million in transit fees. Nord Stream also significantly increased German energy dependence on Russia, which by 2020 was supplying an estimated 50% to 75% of its natural gas, up from 35% in 2015. Natural gas is used not only to power industry but also for heating and to generate electricity in Germany.

Europe got a glimpse of the potential consequences of this dependence in December 2021, when Russia reduced its gas exports to Europe as the crisis involving Ukraine was heating up. Although Russia was still technically meeting its contracts, it stopped selling additional gas as it had in the past. The next month, the International Energy Agency accused Russia of destabilizing European energy security.

Russia has reportedly amassed about 130,000 troops on its border with Ukraine — surrounding the country on three sides. While Putin’s intentions remain unclear, the US is leading efforts to deter a potential invasion by showing that its Western allies are on board with devastating sanctions — including Biden’s promise to thwart a new $11 billion pipeline running from Russia to Germany known as Nord Stream 2.

But Europe’s – and specifically Germany’s – already significant dependence on Russia for energy make them vulnerable given Russia’s history of threatening to cut off gas supplies to its neighbors, and sometimes following through. This could potentially undermine the West’s ability to execute a coordinated sanctions campaign.

For example, an energy crisis in winter could be a disaster for Germany, and fear of it may weaken German willingness to act against Russia. A recent example of potential German softness toward Russia can be seen in German Chancellor Olaf Scholz’s failure to endorse stopping the Nord Stream 2 pipeline as a potential sanction for an invasion.

Russia’s use of trade and energy to create dependencies has given it a strong hand – one that the US and its European allies have limited options to counter.

This article is republished from The Conversation under a Creative Commons license. Read the original article