Skip to content
Home News How much Gogglebox stars get paid for watching TV – and can you apply to be on show?


Gogglebox became a hit since the first time it hit our screens back in 2013. Here’s what you need to know about how much the Gogglebox stars get paid and how you can apply to part of the show

A new season of Channel 4 series Gogglebox hit our screens this month, with our Friday nights once again becoming dedicated to watching people watch TV.

Gogglebox, which features the simple concept of everyday folk sitting in their front rooms while watching the telly and sharing their thoughts on it, became a smash hit from the first time it hit our screens in 2013.

The popular show made its grand return with a new season last Friday, February 18. It will air on Channel 4 at 9pm every week, and also be available live on All 4.

Here’s how much the Gogglebox stars get paid to watch TV and whether you can apply for the show yourself.

How much do Gogglebox stars get paid?

Gogglebox stars’ paid has never been confirmed by Channel 4, but is reported to be a decent monthly fee
(

Each family on Gogglebox reportedly gets paid a sum of £1,500 a month, according to the Sun.

While the amount has never been confirmed by Channel 4, whatever fee they get is apparently shared between the family members. The families also receive a free takeaway each week while they’re filming.

How long do the Gogglebox families film for?

The families who are part of the show are expected to commit to 12 hours of filming a week across two six-hour shifts.

However, they are usually free to do their own thing alongside the show, and many of them film in between working full time or part time jobs, as well as any schooling they need to do.

How to apply to be part of Gogglebox

It’s not clear when Gogglebox might take on any more families at the moment as the new series has just started.

In the past, however, people could express their interest to join the show by contacting show producers Studio Lambert – but that is no longer a route in.

Meanwhile, Paige Deville and her mum Sally quit Gogglebox after a furious family feud, with Sally slating the makers of the show for failing to provide her with adequate aftercare.

How much do the Gogglebox cast get paid – and how much TV do they need to watch?

Executive producer Victoria Ray explained bosses were therefore on the lookout for fresh faces and said hopeful candidates should be “charismatic and engaging”.

“We pick people who don’t want to be on telly,” she added.

“The ideal people are ones who don’t know that they’re funny.”

However, there is no public application process and a spokesman confirmed: “There is no way to apply to be on Gogglebox.”

Many of the current stars were approached by casting directors, with the production company saying they are looking for families or friends with “strong and entertaining” opinions.

Speaking about the casting process for the show, creator Stephen Lambert said in 2015: “Everybody on Gogglebox has been found and persuaded to be on the show and I think that’s the key to why they are likeable and why the show works, because we get to know these people.”

I added: “We’ve never advertised for people on Gogglebox.”

Who is in the Gogglebox cast?

A new couple will make their Gogglebox debut tonight after fans pleaded with telly bosses to get more Scots in front of the camera.

Joe, 25, and his 23-year-old girlfriend Roisin will appear from Joe’s family home in Glasgow, after they moved in together at the start of lockdown. 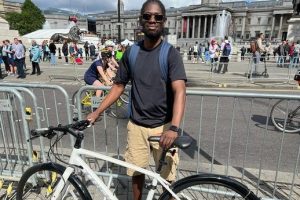