Skip to content
Home News How much are energy bills rising on April 1 and does the price cap affect me? explained


Last month, energy regulator, Ofgem, announced that the average household will be pay just under £2,000 a year to heat and light their home from April – a 54% increase on current prices

There was a time when you could save hundreds by switching your energy supplier. Just two years ago, the average saving was around £300 per household.

But those days are gone, for now, at least, with not even a single ‘cheap’ fixed tariff left.

It’s all to do with the pandemic. When markets reopened after global lockdowns, suppliers were hit by a huge surge in demand, and in turn, wholesale prices rocketed.

Some firms struggled to shoulder these costs because almost all of their customers were locked in fixed deals. That meant they couldn’t increase their prices to reflect real time wholesale gas prices – and so in the end, around 30 collapsed.

The firms that did survive then started pulling their fixed rate tariffs and increasing direct debits charges – by that point wholesale gas prices had gone up more than 150%.

By the end of autumn, no cheap fixed deals were left, meaning customers in need of a tariff had two options: a) lock in an expensive fixed deal or b) roll on to the supplier’s standard variable tariff (SVT). 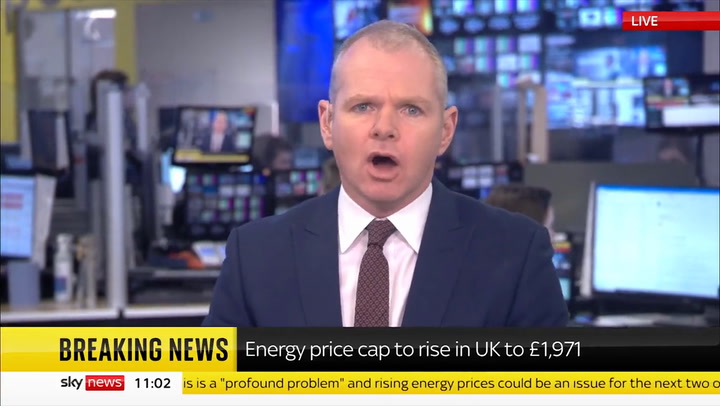 SVTs have traditionally been the most expensive tariffs in the market. They’re the deals households are usually rolled onto if they don’t take action when their fixed tariffs end.

In fact, they’re so expensive that in January 2019, energy regulator Ofgem, introduced a price cap, curbing how much firms can charge customers on these expansive plans.

But we’re now in a strange situation where ‘fixed’ deals are so expensive that SVTs have now become the cheapest deals on the market – because they are capped.

The bad news is this cap, which is based on wholesale prices six months ago, is now rising again to reflect even higher market costs.

On April 1, the cap will rise by around 54%, meaning the average dual-fuel household will be paying £1,971 a year to heat and light their home. That’s £693 more than it is right now.

This is based on typical usage though – so use more and your bills will rise even further, and vice versa.

Homes using a pre-pay meter, which are typically more vulnerable, will on average face a steeper hike of £708 and an annual bill of £2,017.

Although providers can charge less than the cap, most suppliers have now increased their rates, meaning £700-a-year-plus increases are on the cards for millions.

British Gas has told customers on its capped tariffs that from 1 April they will pay 28p-30p per kWh for electricity. There will be a 45p-51p daily standing charge for electricity, and 27p-37p for gas.

From 1 April a British Gas dual-fuel customer paying by direct debit will pay £262 a year in standing charges alone, or £318 if they have a prepayment meter. And that is before they have consumed a single unit.

Those who pay by direct debit will pay the least. Customers paying by cash or check on receipt of their bill, or because who have a prepayment meter, will be charged more.

Only those on long-term fixed tariffs signed with a supplier that has not failed will avoid the rises. But of course, millions of these are likely to end in the coming months.

That could just be the start. Wholesale gas prices rose 28% on Thursday’s news that Russian forces had invaded Ukraine.

If those are sustained, Ofgem will have to substantially increase prices again when they review the cap for the autumn.

That raises the prospect of gas and electricity bills of more than £2,500 a year.

We’ve got plenty of advice on how to keep your heating bills down, here. For more advice as the prices rises unfold, stay tuned here.

I’m on a fixed deal, is my bill going up?

No, not while your fixed deal lasts. The cap relates to the energy providers’ standard variable tariffs – these are the tariffs that customers are on as a default and have traditionally been more expensive than the fixed-rate deals on offer.

The reason the energy cap was introduced was to stop these customers paying high prices because of their loyalty.

If you are on a fixed deal, you will carry on paying the same rate until the end of the term – unless your provider fails and you get switched to a new company. If that happens, you will be moved onto their variable tariff.

Households are in a strange place at the moment because moving to a new fixed deal would mean paying higher prices. It is likely that if your deal ends soon you will be better off moving on to your provider’s standard tariff than going on to a new fixed rate.

E.on energy deal sells out after Martin Lewis tells millions of people to sign up

UK energy bills could hit £3,000 a year due to Russia and Ukraine crisis