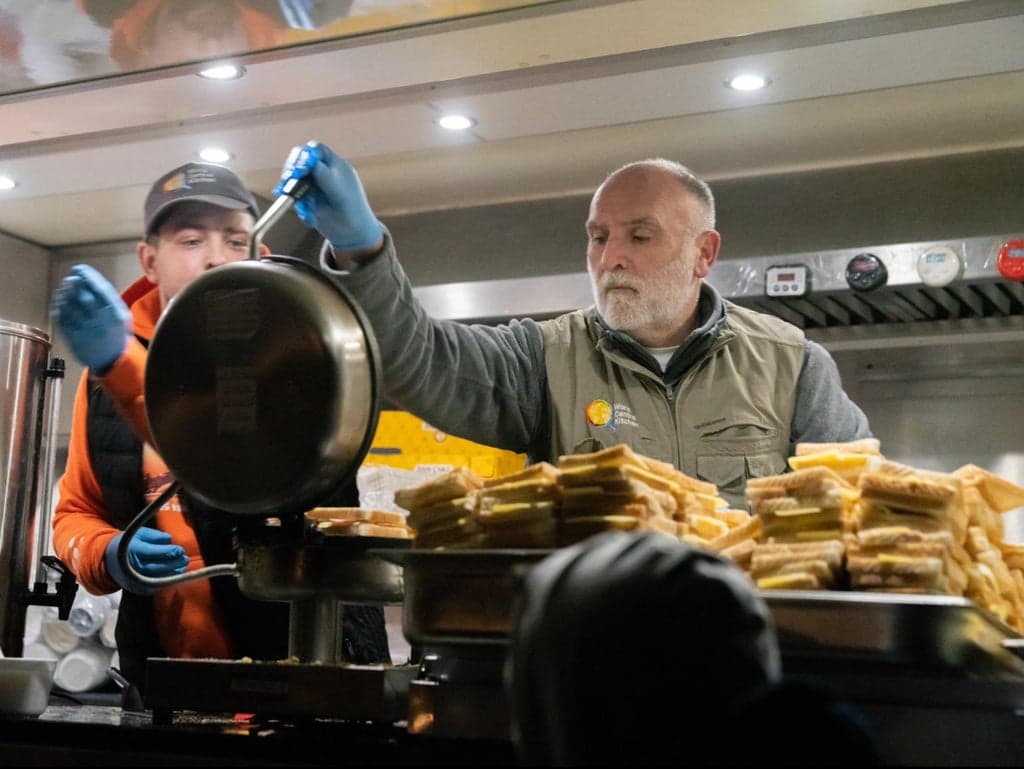 WIthin hours of Russia’s invasion of Ukraine, José Andrés got to work. The chef and humanitarian traveled to the border and, through his nonprofit World Central Kitchen, started setting up a supply chain to provide meals to Ukrainian people. “I have always believed in the power of food to change the world,” he tells The Independent. “And in this situation, a plate of food cannot be the thing that solves the war, but maybe it can bring some comfort and hope, some light during a long and difficult journey.”

For three weeks now, Andrés and World Central Kitchen have shared updates from the ground. The organization has partnered with local restaurants, caterers, and food trucks to feed people at border crossings, shelters, and other communities. As of 14 March, he said he had served more than one million meals across Ukraine, Poland, Romania, Hungary, and Moldova, working with more than 110 suppliers in 58 cities. It has also provided both hot meals and bulk food products, such as produce and dry goods, to restaurants in Ukraine.

“We are watching, in real time, one of the fastest growing refugee crises in modern history, and each person who is leaving home has their own story, their own life, their own families who rely on them,” Andrés says. “This is why I needed to go, and to have the women and men of World Central Kitchen do everything they could do to help. The people of Ukraine, we are one with them. Everyone in the world is Ukrainian right now.”

Andrés and his team began their work in Poland. The first time they crossed the border to Ukraine, Andrés says, was on foot, carrying fruit and other food to feed people waiting in line to cross over from Ukraine into Poland. “We were in touch with officials on all sides, including the US government, to make sure we were doing it safely and legally,” Andrés says.

In Ukraine, World Central Kitchen has set up a site in Lviv, and has “tents at two railway stations to feed people as they arrive by train, coming all day and night from other parts of the country”.

“There has of course been a lot of security on the Ukraine side of the border, on the road to Lviv and inside the city,” Andrés says. “It is in the west, currently miles away from the war itself, but when you’re there, you can feel that the city is getting ready for something, they are getting prepared. So to reach it, there are a lot of border controls, a stop every few kilometers, which is understandable to make sure that no one is bringing anything dangerous. This is what is so disturbing about war, the uncertainty of something coming, we can feel it in the atmosphere that there are terrible things happening in the rest of the country.”

Supply has been a challenge. World Central Kitchen uses compostable utensils and plates, which have been hard to get hold of. But the organization, which was created in 2010, has years of experience providing relief, having done so in the wake of natural disasters such as Hurricane Maria in 2017 and the 2018 Kilauea volcano eruption, and during the Covid pandemic. “Supply chain issues are making this more difficult,” Andrés says, “but we have been dealing with these issues for a long time and have a very strong logistics and procurement team, so we always find a way.”

See also  The history of San Fermín through its posters

Andrés and his team have managed to serve a variety of warm meals. “It’s been so cold, let me tell you, so we have been focusing on hot, comforting traditional dishes,” he says. “Żurek is a traditional Polish soup with white sausage, smoked meat and sour fermented rye flour. We’ve made other rich stews with chicken and beef, with meatballs, with potatoes, with mushrooms and cabbage. Everywhere we are serving hot tea. A small girl at one of the shelters told our team that her favorite food de ella is buckwheat stew with chicken wings… so that’s what we made for her and the other families staying at the shelter.

“To me, feeding is the best form of fighting,” he adds. “This is why we are building longer tables and gathering more and more people to sit at them, to share this belief.”

One of the most difficult things Andrés has witnessed on the ground is “the many, many goodbyes of fathers and their families”, as most Ukrainian men between the ages of 18 and 60 have been banned from leaving the country.

“The media is talking about this but when you see it in person, day after day, moment after moment, it breaks your heart again every time,” he says. “The men are doing something brave and noble for their country, but to see them leaving their families – as a father, I cannot imagine. It brings tears to my eyes.”

People leaving Ukraine, he says, “are escaping tragedy to reach a place of uncertainty.” “We have seen this in other places in the world, the huge burden it places on a mother, on a grandmother, a sister or a brother, to leave everything behind and have the faith that things will be okay,” he says. “But what they are leaving behind might be even worse – people are waiting for over 24 hours to even get to the checkpoint, then they board a bus and move on to the next point in their journey. But they would rather be far away than to see what will happen to their beautiful country.”

Andrés finds hope in the belief that “everyone – those that leave, those that stay – is looking forward to a time, hopefully in the very near future, where there will be peace and they can once again come together. We must have faith.”