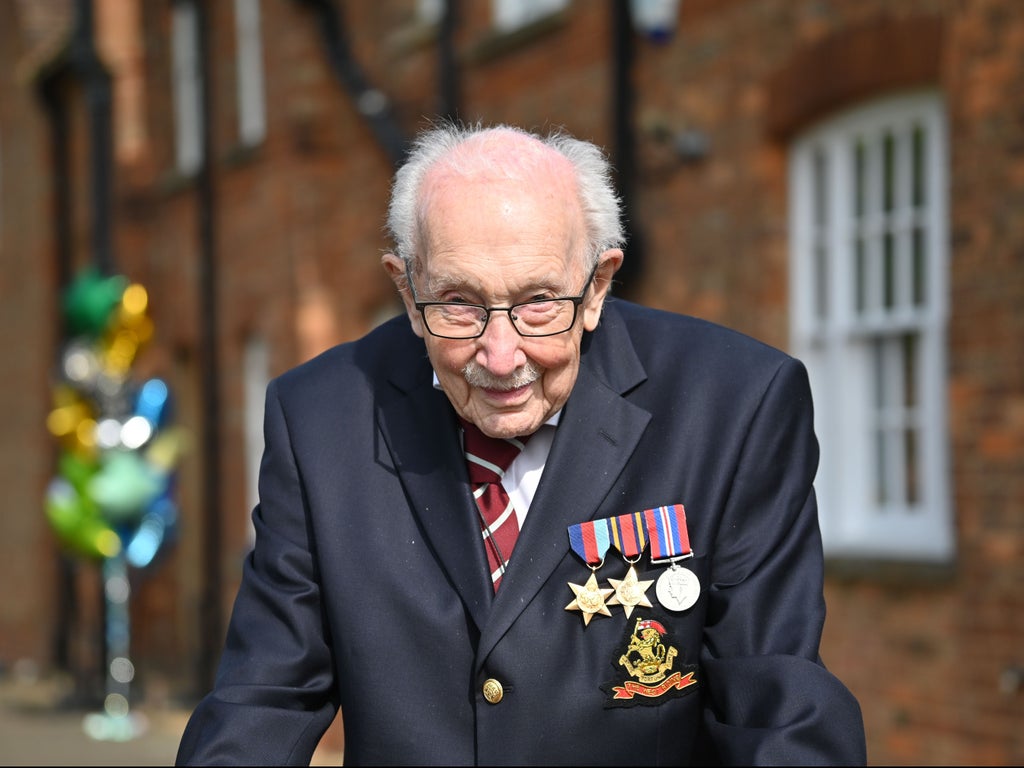 Captain Tom Moore became a national hero in the first year of the coronavirus pandemic when, at almost 100 years of age, he completed a century of laps around his Bedfordshire garden aided only by a zimmer frame.

The Second World War veteran’s extraordinary efforts became a sensation, with millions tuning in to watch him complete his final lap live on bbc breakfast as he raised money to support the NHS.

All told, the great man eventually raised £32.8m (or £39.3m including Gift Aid) for NHS Charities Together, a remarkable effort that saw him knighted and score an unlikely number one single (a cover of “You’ll Never Walk Alone ”, unavoidably).

He passed away in February last year after falling ill with pneumonia and then contracting Covid himself.

A year on it has emerged that the charity established in his name, the Captain Tom Foundation, has spent more money on management fees than it has on donations.

That might raise questions about what happened to the initial £33m, so here we look at where the kindly-donated cash went.

NHS Charities Together raised £150m to support its Covid-19 Urgent Appeal during the pandemic, of which the centenarian’s contribution alone accounts for an astonishing 21.8 per cent.

His fundraising was delivered to the organisation’s 241 members charities in two tranches, the first of which saw each receive £35,000, which totals £8.4m.

A second wave of funding was calculated on the basis of how many staff each trust had on its payroll to ensure the money was apportioned fairly according to the size of each institution in question, with £7 allotted per staff member.

What was the money spent on?

Captain Tom’s haul was spent by each institution in many different ways, depending on the needs on the ground – some larger than others.

North Devon District Hospital’s charity received £109,500, the maximum available for a facility of its size, and spent £50,000 on a new staff shower block and lockers to reduce the risk of infection, protect its staff and provide additional comfort.

It also used the money to build a new outdoor staff area and to train staff to take part in the Florence Nightingale nurse leadership course and, as in other institutions, to provide patients with tech to entertain them during their recovery and enable them to contact relatives .

Edinburgh’s Western General Hospital used Captain Tom’s money to convert an old library into comfortable space with chairs and quiet rooms for staff, visitors and recovering patients to rest and relax amid the chaos.

At Wrexham Maelor Hospital, the capital was spent on training and to replenish the nurses’ fund with cash for tea, coffee and mineral water.

“I’ve had nurses faint on duty in PPE. Just being able to come out and have a cold drink, a cold bottle of water is just unbelievable,” said critical care matron Helen Williams.

“We were able to fund devices that enabled patients to see their loved ones, tragically sometimes to say goodbye to them, which made all the difference to them at that difficult moment,” added intensive care nurse Kate Sinclair.

More small scale examples include the free pop-up shop for staff which opened at London’s Charing Cross Hospital, laying on free fruit, snacks and convenience foods for those taking a break or trekking home after an exhausting shift.

Meanwhile the Imperial Health Charity in the capital extending its counseling service for doctors and nurses risking their own mental wellbeing to attend to Covid patients.

“The remarkable fundraising efforts of Captain Sir Tom Moore ensured many more of our staff have been able to reach out and access support when they have needed it most,” said Dr Sarah Finlay, A&E lead at St Mary’s Hospital. “The pandemic has been very difficult and everyone has been affected.”

“In the NHS there hasn’t really been money for things like that – not luxury items, but things that aren’t necessarily essential,” ward manager Cath Scott told the BBC. “They will make a big difference.”

That hospital was also able to provide staff with individual lockers to store their personal effects, meaning they no longer needed to share, as well as iPads to enable patients to contact their concerned relatives, rather than borrow the personal phones of nurses to make calls as had often been the case.

The Captain Tom Foundation was set up in May 2020 in the wake of the huge success of his own fundraising efforts, and has raised around £1m on top of the £33m the war hero collected himself.

The latest financial disclosures filed by the fledgling institution to the Charity Commission reveal that, of the £1,096,526 earned between 5 May 2020 and 31 May 2021 from donations and grants just £160,000 was released as charitable grants.

That money went to the Royal British Legion, Mind, Helen & Douglas House and Willen Hospice with each receiving £40,000.

What does the foundation say?

The foundation justified its high administrative costs in its accounts filing by explaining: “As a newly established charity, expenditure has been incurred in building the team, which for some months worked on a voluntary basis until funds were forthcoming.

“During this period, we also incurred costs in appointing The Philanthropy Company who provided expert support on governance and fundraising initiatives as well as working with our charity partners to identify initiatives that the foundation could support and which would drive value and public benefit.”

A spokesperson said in a statement: “In the period 5 May 2020-31 May 2021, the foundation was dedicated to combating loneliness, championing education and equality and supporting those facing bereavement. During this time, we distributed donations to hospices and other charities close to Captain Tom’s heart.

“We also raised awareness through events such as Walk with Tom (Dec 2020) and The Captain Tom 100 (April 2021), which received 12.8 billion impressions on social media worldwide, got many people active and helped fight loneliness.

“As a charity in our infancy, we focused on fundraising for other charities close to Captain Tom’s heart and are very proud that through this campaign that we led, £1.4m was raised in three days, this went directly to charities.”