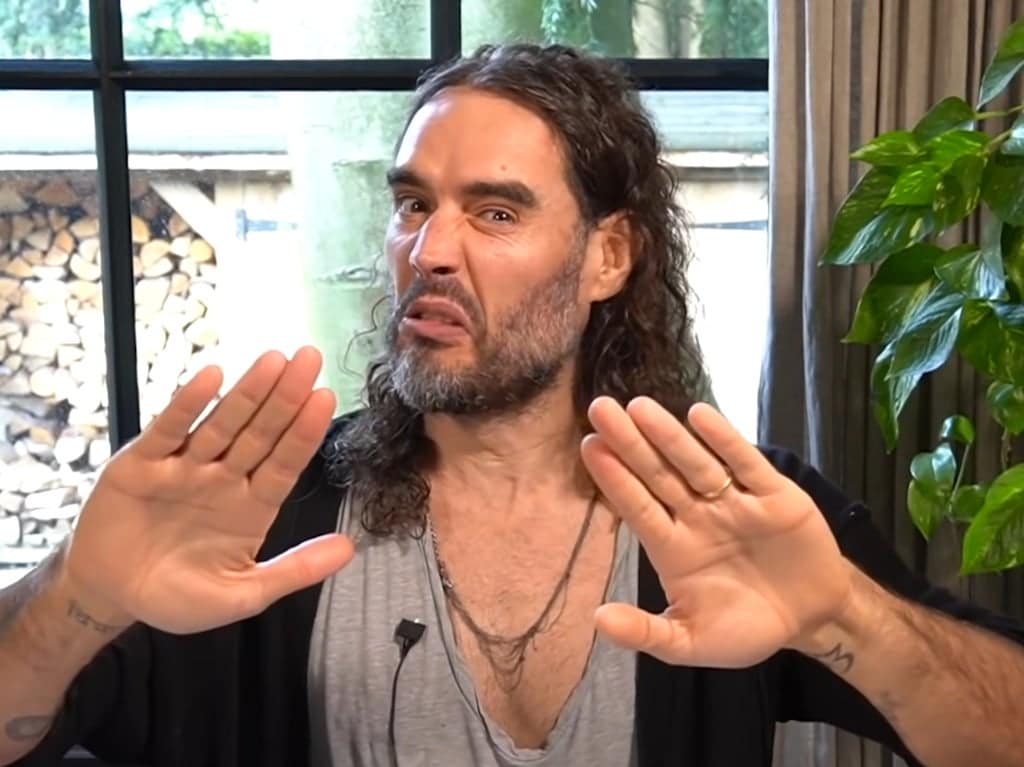 When did Russell Brand decide comedy wasn’t enough for him? For most of his time in the public eye, the Essex-born funnyman has been better known for his off-stage antics than any particulars of his comic craft. There was his short-lived marriage from him to Katy Perry. His bullying of Andrew Sachs over voicemail on Jonathan Ross’s radio show. His vocal objections to voting in general elections back in 2013. Well over a decade on from all that, his personal website now describes him as an award-winning comedian, actor, author, a “passionate activist for mental health and drug rehabilitation”, and, more grandiosely, a “public thought leader.” See, he can still make you laugh.

It is in this last capacity that Brand operates his self-titled YouTube channel, publishing daily videos to 5.3 million followers and counting. These videos have prompted some to accuse Brand of peddling conspiracy theories – and it’s easy to see why. Hot-button issues such as Covid vaccines and the Russian invasion of Ukraine have countless clips devoted to them. Usually they’re framed with some sort of contrarian take or calling out hypocrisy in the mainstream media. They frequently have alarmist titles, hinting at a vague, world-altering conspiracy. A few recent examples: “WW3 – So THIS Is Why They Want Russia War”; “So They DO Run The World”; “I’ve Been Warned Not To Talk About This”. They often open with Brand addressing viewers as “awakening wonders” – “awakening” being his New Age-inflected buzzword of choice from him.

With his beard, long hair and loose-fitting, wide-necked shirts, it’s hard to shake the sense that there’s something cultish about Brand’s whole presentation. And yet, despite all the Matrix-like “here’s the real truth”-ing, Brand’s videos are also thoroughly beholden to his puerile sense of humour, with each new revelation incongruously seasoned with a splash of his insufferable schtick.

On Monday (14 March) a clip from one of Brand’s recent Russia-themed videos went viral on Twitter. Entitled “How Did We Miss This?”, in it Brand criticizes Canadian prime minister Justin Trudeau, and “authoritarianism” in Canada surrounding vaccine mandates, which faced a series of costly and high-profile protests nicknamed the “freedom convoy”. Brand is careful to stipulate that he is not condoning Russia’s actions, but simply pointing out a perceived hypocrisy. Whatever your opinion on Canada’s Covid laws, it should be clear that one of these things has nothing to do with the other.

One of the more common reactions to the clip – and to Brand’s YouTube persona in general – has been to compare him to Joe Rogan, the controversial US podcaster whose handling of Covid-related misinformation led to much-publicized boycotts of Spotify earlier this year. Like Rogan, Brand made his name from him as a comedian. Like Rogan, he has given a platform to conspiracy theories on his channel, sometimes making claims based on unsubstantiated or fringe sources. But both men also offer their followers the same unusual appeal: an apparently sincere willingness to question what we are told. The popularity of Brand’s videos is a testament to just how disillusioned many people are with mainstream media, and just how eager they are for open, defiant skepticism.

Now, it’s true that the evils of western foreign policy are often omitted from mainstream news reporting, or else largely downplayed. But is this really because of some grand, orchestrated effort to keep the public ill-informed? More likely it’s just for brevity or relevance’s sake, or for legal reasons, or due to vague and unspoken corporate pressures.

Brand is right when he suggests that the Russia-Ukraine situation is a whole lot more complex than most news sources make out. But unless you’re going to vast swathes of research on the political and social histories of the countries, you’re never going to get the full picture. Brand’s whataboutery offers no fuller picture of the complexities of the situation than any mainstream news report does – but does offer a lot more unverifiable speculation.

His sources have come under scrutiny before, with far-right journalists and unsubstantiated newsletters among the sources used as the basis for past video essays. Last year’s “So…Trump was RIGHT About Clinton & Russia Collusion!!” featured some particularly egregious mistruths. This is one of the problems with his approach to broadcasting: some of the world’s most trusted sources are regarded with fierce cynicism, while other more spurious ones are taken blithely at face value.

Ultimately, Brand would probably say that he preaches a healthy distrust of prescribed authority. “Together, we can create new narratives, new stories and new understanding,” he told followers recently. But surely this same scrutiny should also apply to himself? In a world where conspiracy lurks around every corner, where every news source has a hidden motive, it begs the question: what exactly is his?

Maybe he truly wants to awaken his followers to the world’s ugly realities. Maybe he just likes the attention. Or maybe a skeptical viewer might watch one of his videos of him and question why he advertises his stand-up tour just seconds into the start of each clip. Hypothetically speaking, if a comedian of wanting mass-market appeal were looking to drum up ticket sales and bolster their profile of him, there’d be worse ways to go about it than a series of topical controversy-mongering YouTube videos. But who can tell? Either way, I’m starting to sound like a conspiracy theorist myself…