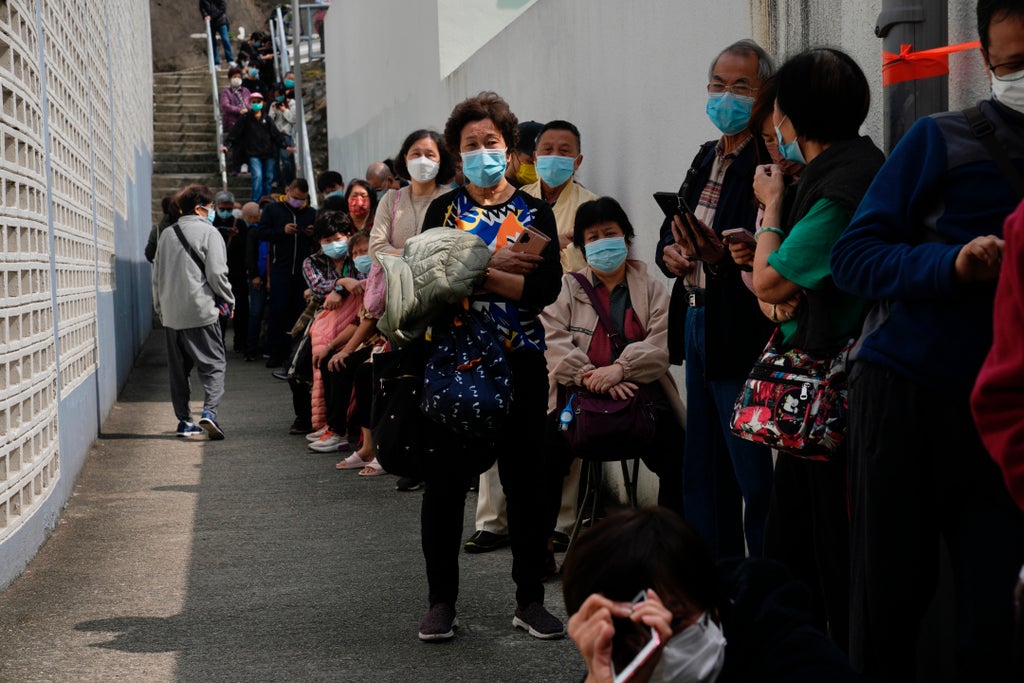 Hong Kong’s reported plans to test a million people each day amid a growing Covid outbreak have been labeled as “ridiculous nonsense” by a public health expert.

The city is currently facing its worst outbreak of the pandemic, with new cases having multiplied by 60 times so far this month.

Health authorities reported a record 6,116 confirmed cases on Thursday, up from 4,285 the previous day, with a further 6,300 preliminary positive cases. That takes the total since January to more than 16,600.

The Hong Kong government has already instituted strict rules, banning gatherings of more than two households with penalties up to HK$10,000 (£941) for rule breakers.

Hospitals are overwhelmed with some patients, including elderly, left lying on beds outside in chilly, sometimes rainy weather, in shocking scenes that prompted an apology from authorities in the Chinese-controlled city.

The government is aiming to secure 10,000 hotel rooms for Covid patients to tackle the backlog.

Some media reports, citing unidentified sources, said the government planned to test up to 1 million people each day from March and those who failed to comply would be fined HK$10,000.

Yet Professor Dong-Yan Jin, a virologist at the University of Hong Kong, said it would be “ridiculous” to carry out mass testing.

“Universal testing or to lock down a particular part of Hong Kong, the whole of Hong Kong – all this ridiculous nonsense,” he told SkyNews.

“[It’s] actually not valid at this point of time. It’s just completely a waste of resources.”

Professor Jin said the reason hospitals were overwhelmed was because even asymptomatic Covid patients were seeking treatment and that strict discharge criteria meant they were being kept in facilities for too long.

Chinese President Xi Jinping has told Hong Kong’s leaders that their “overriding mission” was to stabilize and control the virus.

Ms Lam said yesterday: “As far as Hong Kong is concerned, we need to find our own way out of this epidemic. And so far, our measures to contain the spread of the disease remains a legitimate and valid one.

“The problem we are facing is given the magnitude, the pace of and the severity of this fifth wave. It has outgrown our capacity.”

The jump in cases is the biggest test yet of the city’s “dynamic zero-Covid” policy, but Ms Lam said this week the city “cannot surrender to the virus.”

The surge in cases and tighter rules have battered the city’s retail sector, with the Retail Management Association (HKRMA) saying on Thursday retail traffic was down 40 per cent from December.

“If the pandemic gets worse and if our rents are kept at the level now…we will not survive,” said Annie Tse, chairwoman of HKRMA. “Since protests and Covid it’s been almost three years, how much more cash can we burn?” she said, referring to anti-government demonstrations in 2019.

The association, which represents around 9,000 retail outlets and employs over half of the local retail workforce, urged the government to force developers to provide rent relief for tenants and include the sector in an anti-epidemic fund.

China has said it would help Hong Kong bolster its testing, treatment and quarantine capacity, and secure resources from rapid antigen kits and protective gear to fresh vegetables.

Hong Kong has recorded around 35,000 infections since the start of the pandemic, and more than 250 deaths, far fewer than other similar sized major cities.