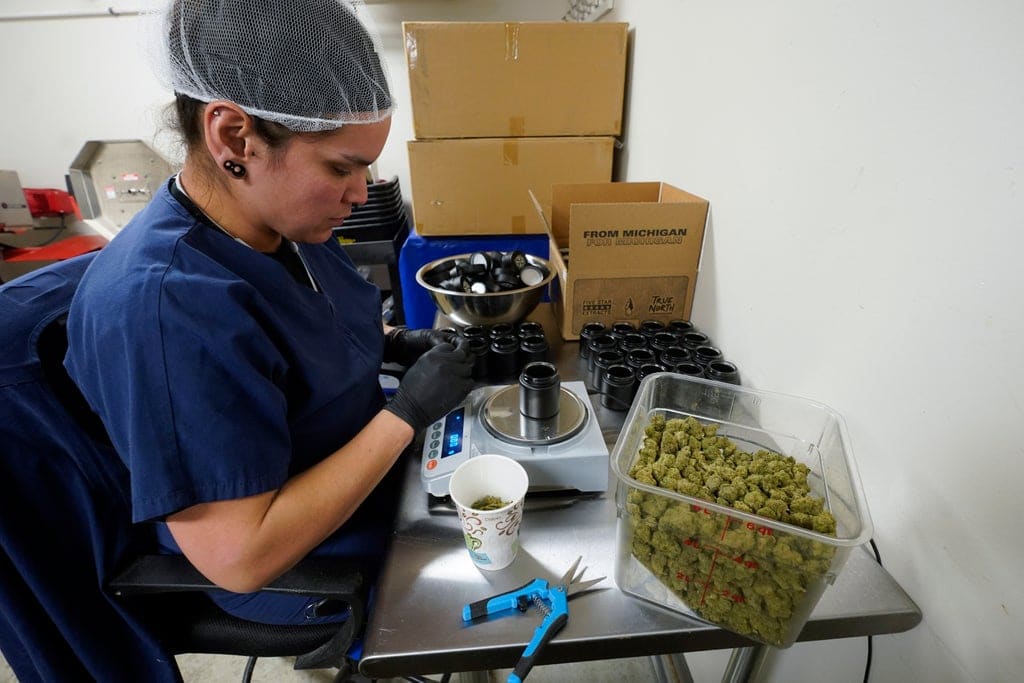 Over the past few years, Jonny Griffis has invested millions of dollars in his legal marijuana farm in northern Michigan, which produces extracts to be used in things like gummy bears and vape oils.

But now that farm — like many other licensed grows in states that have legalized marijuana — faces an existential threat: high-inducing cannabis compounds derived not from the heavily regulated and taxed legal marijuana industry, but from a chemical process involving little-regulated, cheaply grown hemp.

“It’s going to make our farm obsolete,” Griffis, the chief operating officer of True North Collective, testified before Michigan’s Marijuana Regulatory Agency recently. “The $3 million or so that I’ve invested … is going to be wiped out.”

At the center of the issue is THC, marijuana’s main intoxicating component. While marijuana and hemp are the same plant — cannabis — the distinction between the two is a legal one, and comes down to the amount of THC in the plant, specifically the amount of a type of THC called delta-9.

Hemp is defined in federal law by its low delta-9 THC content and is traditionally used for food, clothing and industrial applications. “Rope not dope” was long a motto for those who advocated the legalization of hemp.

But since Congress passed the 2018 Farm Bill, authorizing the growing of hemp nationwide, there’s been an unforeseen consequence: People exploiting what they see as a loophole in the law have taken that hemp, extracted a non-intoxicating compound called CBD, and chemically changed it — generally by the addition of solvents and heat — into various types of impairing THC.

Unlike the completely artificial, often dangerous drugs known as K2 or Spice and called “synthetic marijuana,” the chemically created THC at issue here consists of molecules found naturally in cannabis, though sometimes in vanishingly small amounts. It’s far cheaper to produce THC chemically from hemp than to extract it from marijuana.

See also  "He put the drug in my colacao to rape me": the testimony of the victims of chemical submission | Hour 25 | Present

Because it is derived from hemp, that THC — often in a form called delta-8 — can wind up in candies, vape oils and other products sold in gas stations, convenience stores and online, even in states where marijuana is illegal. The Food and Drug Administration warned last year that the substances pose a public health risk due to multiple factors, including the way they are marketed and because of potential contamination when manufactured.

At least 17 states have banned such products, but they remain available in many, including the pioneering legal marijuana state of Washington, where gas station and vape-shop sales of THC created from hemp offer competition to the heavily taxed, regulated and tested marijuana market .

Virginia lawmakers this month approved a bill to strictly limit the amount of THC allowed in hemp-derived products; Gov. Glenn Youngkin has not yet signed it. In Kentucky and Georgia, recent lawsuits have sought to establish that delta-8 products are legal; a Kentucky judge sided with hemp advocates there on Feb. 28, allowing the products to continue to be sold as lawmakers consider a ban.

The US Hemp Roundtable, a hemp industry association, has decried the use of hemp-extracted CBD to create intoxicating products, saying it “undermines the integrity of the hemp industry and intent of the 2018 Farm Bill.”

Supporters call chemically derived THC economical and environmentally friendly. Hemp can be grown in vast fields outdoors, without expensive lighting systems, and can have a lower carbon footprint than marijuana.

Further, processors can make a more consistent product using chemistry to make THC from CBD, they say, and regulators shouldn’t stand in the way of market innovations or pick winners and losers in the industry. They like it to the synthetically created vanilla or caffeine added to food and drinks.

“Most growers don’t like to hear this, because they feel like it’s taking away from their market, but it’s a great product,” said Abe Fleishman, of Northstar Hemp in Oregon. “It provides an opportunity for companies to scale production, for one, and to make a new product that is, in my opinion, cleaner than your regular THC products.”

For critics, the safety isn’t proven; the process of making it can leave behind trace amounts of unidentifiable compounds. The method also allows for the manufacture of lesser-known cannabis compounds whose health effects aren’t well understood.

Chemically produced THC is unlikely to displace the top-shelf dried cannabis flower preferred by many connoisseurs, but it is so cheap to make that it drastically undercuts marijuana growers who focus on the extract market, and who have spent a lot of time and money adapting to stringent rules for their industry.

“It’s an issue that almost every state cannabis regulator is thinking about,” said Gillian Schauer, executive director of the Cannabis Regulators Association. “It’s presenting a lot of challenges to protecting public health and consumer safety, and also to protecting existing state cannabis markets.”

And, Schauer said, THC chemically made from hemp is only the type of the iceberg: It can also be made from bioengineered yeast, so regulators will soon find themselves wrestling with that as well.

In Michigan, the Marijuana Regulatory Agency is considering rules that would allow processors to convert CBD into THC with written prior approval from the agency, which would require demonstrations of the conversion method and product testing. They would also have to label their product as synthetic — a suggestion that has angered processors who note that the molecules are found in nature.

Oregon’s Liquor and Cannabis Commission gave marijuana licenses a six-month grace period to sell off intoxicating THC-from-hemp products they had already acquired before a ban takes effect in July.

See also  Coronavirus and hepatitis: What are hepatitis symptoms among investigations into hepatitis in children?

In California, hemp-derived THC products are not allowed in legal marijuana shops, but regulators are examining the steps necessary to allow them.

Colorado and Washington, which in 2012 became the first states to legalize recreational marijuana, last year made clear that synthetically derived cannabinoids, including THC, are not allowed in their legal industries.

After an uproar from licensed growers who said they were being undercut, Washington’s Liquor and Cannabis board seized more than 1,600 pounds (726 kilograms) of chemically created THC products made by a single licensed marijuana company, Unicorn Brands. The board went on to ban them from the regulated market.

For David Postman, the board’s chairman, THC made from hemp represents an industrialization of the cannabis industry that he isn’t sure voters wanted when they passed Washington’s legal marijuana law, which was billed as a harm-reduction measure.

“The LCB and the majority of the cannabis industry do not think the legal market should include mind-impairing, lab-created THC,” Postman said. “Allowing synthetically derived THC in the state’s legal cannabis market could devastate the industry.”

Vicki Christophersen, a lobbyist for the industry group Washington CannaBusiness Association, argues that the board’s approach is stifling innovation in ways that will make it tough for Washington to compete nationally, should the federal ban on marijuana ever be lifted.

“The collaborations that occur between the hemp industry and the adult-use cannabis industry are not only inevitable, but they’re important,” she said. “We need to look at what is going to advance Washington’s industry alongside all the other competitor states that are advancing at a much higher speed than we are.”