While Celtic’s inability to secure a ninth consecutive league win was down to some of their own attacking failings on the day, much of the credit lies with Hibs for the fully committed, disciplined performance that kept the league leaders at bay for 90+8 minutes.

Celtic were without their leading marksmen – Giorgos Giakoumakis ruled out by illness to join Kyogo Furushashi on the sidelines – and they were certainly missed as the away side struggled to find the answers to Hibs’ solid defensive structure.

The Hoops lacked their usual spark in midfield with Tom Rogic particularly flat compared to recent displays and it was no surprise to see him replaced after an hour. Up front, Diazen Maeda lacked a presence and with what little touches of the ball the Japanese forward had, he struggled to link play effectively. Jota was uncharacteristically wasteful with his finishing him. On the odd occasion he created space for a shot from outside the box, he troubled the spectators several rows up the Easter Road stand more than Matt Macey in the Hibs goal. Liel Abada was Celtic’s most dangerous outlet, but he hit the side-netting with two presentable opportunities, albeit from tricky angles, and was denied in Celtic’s best moment of the match by a save from Macey. Celtic’s defense was rarely trouble as Cameron Carter-Vickers strolled through the 90 minutes, with Joe Hart was not called to make a single save, but had a clumsy moment near the end when he conceded a corner after getting his feet into a fankle.

There were no failures in the Hibs team but several stand-outs. After a difficult week off the park, Ryan Porteous was immense at the back, and either side of him, Josh Doig and Rocky Bushiri were virtually faultless as the back three worked in perfect tandem to deny Celtic space and any clear opportunities. Celtic carry enormous threat in the wide areas but in Lewis Stevenson and Chris Cadden, Hibs’ wing-backs had all the answers, both defensively and, at times, carrying the ball forward. It was in midfield, however, where the home side’s star man was on display. Whether it was putting in tackles, reacting first to second balls, or driving his team forward, Josh Campbell was everywhere for Hibs. He marked Rogic out of the game and was so often the man who put a stop to Celtic attacks. A lung-bursting run forward to win a corner in the 87th minute summed up his all-action performance. Hibs best attacking outlet was Sylvester Jasper, the on-loan winger from Fulham. He drew the Celtic defense into fouls that helped drag his team up the park, and had a shot in the second half that was troubling Hart until it was blocked by teammate Christian Doidge, who replaced the injured Kevin Nisbet in the first half, and gave a good account of himself.

How the Hibs and Celtic players rated 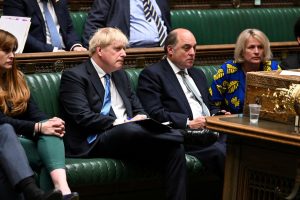 Factbox: Can Boris Johnson be forced out, and how is a successor chosen?