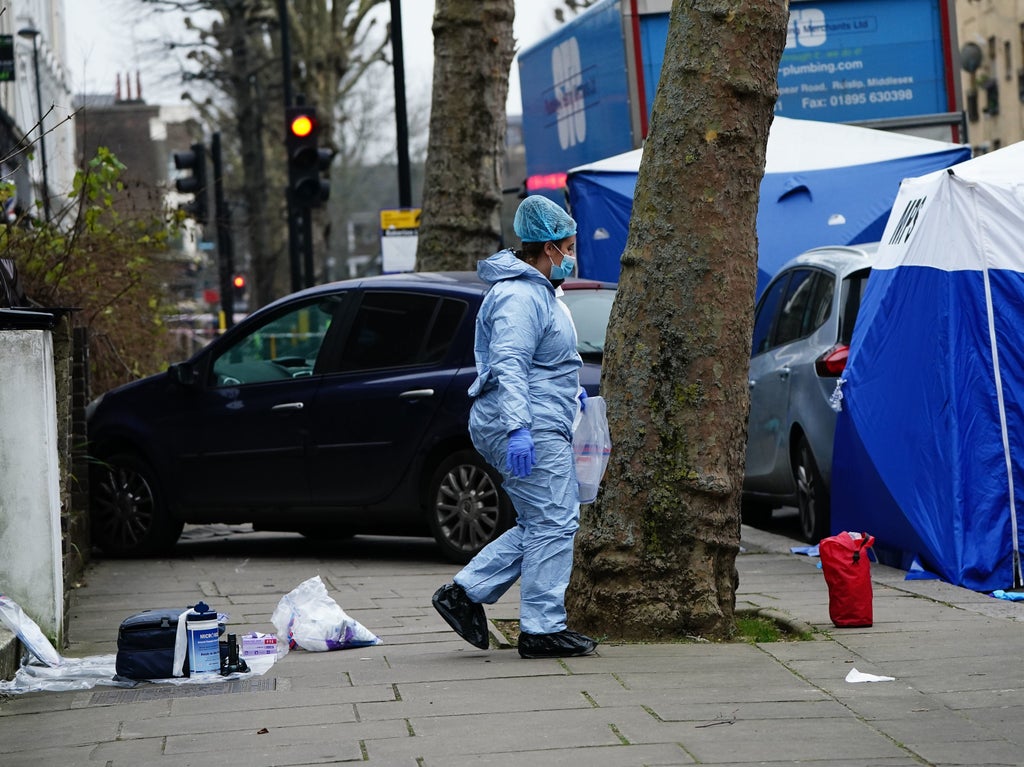 A driver who ran over a knifeman an attempt to stop him stabbing his ex-wife to death in the middle of a street has pleaded with police to drop their murder investigation.

The 26-year-old motorist, identified by his lawyers only as Abraham, said he was being treated as a criminal despite “just wanting to stop him from hurting anybody further”.

He had been driving to work on Monday morning when he witnessed Leon McCaskre, 41, knifing 43-year-old Yasmin Chkaifi in front of horrified onlookers just meters from her home in Maida Vale, west London.

Abraham, who described himself as a Muslim and family man, said his “instant thought” was to protect the mother-of-two as he drove his blue Renault Clio towards McCaskre in a bid to stop him.

But Ms Chkaifi could not be saved, and both she and McCaskre died of their injuries at the scene in Chippenham Road.

It has since emerged the knifeman, who also went by the name McCaskie, was wanted by police after failing to turn up to court just weeks earlier over allegations he breached a stalking order by approaching Ms Chkaifi in July 2021.

Police arrested Abraham at the scene on suspicion of murder but later released him on bail and said he had been fully cooperative with their investigation.

Ms Chkaifi’s family praised the driver as “our hero” and suggested he should receive an honor from the Queen – while 23,000 people have signed an online petition calling for the probe into him to be dropped.

In a statement released through his lawyer Mohammed Akunjee, Abraham said it was never his intention to harm anyone as he called on the Metropolitan Police to de-arrest him.

He said: “I witnessed a man repeatedly stabbing a defenseless woman on the pavement a short distance in front of my car. Members of the public were attempting to intervene.

“The attacker was wielding a knife and was threatening those brave citizens too.

“My instant thought was to protect the woman who had been stabbed and the public who were also being threatened.

“The vehicles ahead of me moved off which gave me the opportunity to intervene. I drove my vehicle towards the attacker in order to get him away from the woman he was attacking.

“I did not intend to harm the attacker, I only intended to protect those being attacked.”

Abraham said he and other passers-by tried unsuccessfully to lift the car away from McCaskre to give him first aid after he was unable to reverse the vehicle.

“I am deeply sorry that the man I tried to stop from attacking other people has died,” he said. “It was never my intention to harm him, I just wanted to stop him from hurting anybody further.”

He added: “I understand that the police are doing their job and that my being arrested is not unusual. However, I do not see why I as the person who tried to assist in the defense of other human beings remain arrested and on bail under suspicion of murder.

“I have asked my solicitor to contact the Metropolitan Police to request that they consider de-arresting me and begin treating me as a witness to a tragic event rather than as a criminal as they currently are.”

Westminster Magistrates’ Court confirmed a warrant was issued for McCaskre’s arrest on 4 January after he failed to appear over allegations he breached an interim stalking protection order by physically approaching Ms Chkaifi in west London on 29 July 2021.

He was also barred from making contact by phone, email, text or social media.

The Metropolitan Police would not comment on the warrant or whether Mr McCaskre had ever been over the alleged breach.

The force, which previously confirmed a stalking prevention order had been obtained against Mr McCaskre, said it had referred itself to the Independent Office for Police Conduct (IOPC).

A friend of Ms Chkaifi has revealed the mother-of-two raised fears her ex-husband might kill her almost two years before her death.

Her family previously described McCaskre as a “demon”, while a childhood friend told The Independent she had a panic alarm installed in her home.

Adele-Sara Richards, who knew her as Yaz, said Ms Chkaifi messaged her in April 2020 to say: “He’s had cameras in my house recording me for months.”

She went on: “He’s stolen my mail, my phone, you have access to all my personal data.

“I think he will kill me. I’ve tried everything.”