Skip to content
Home News Hepatitis warning signs in children: 10 symptoms to look for as cases continue to rise


Parents have been asked to keep an eye out for hepatitis symptoms as cases continue to rise in the UK.

Latest figures from the UK Health Security Agency (UKHSA) say there are as many as 222 cases of hepatitis in children aged 10 and under.

There have been 31 confirmed cases in Scotland and nationwide figures rose by 20 yesterday.

The infection affects the liver, and medical professionals are concerned about the severity of the disease in these young, otherwise healthy children, the Mirror reports.

17 children have needed a liver transplant and one child has sadly died of liver failure. To slow the spread, parents are being asked to stay vigilant and to be aware of symptoms.

According to the UK Health Security Agency, potential warning signs include:

How does hepatitis spread in young children?

Hepatitis is spread through close contact, typically through coughing, sneezing, or touching contaminated surfaces according to UKHSA advice.

In a recent blog post they said: “The most effective way to reduce the spread of infections is to practice good hand and respiratory hygiene.

Public health teams are investigating possible causes to the sudden increase in cases among children.

One theory is that due to Covid-19, children were mixing far less than they used to, meaning they caught fewer infections than before the pandemic.

Now that lockdown has ended and children are able to socialize again, there has been a rise in infections.

Researchers are studying if the problems are developing “in tandem” with another virus.

This includes the possibility of it mixing with the virus that causes coronavirus, known as SARS-CoV-2.

Simon Taylor-Robinson, a consultant hepatologist and professor of translational medicine at Imperial College London, told Reuters: “This may be an over-response to stimulation to the immune system that is not used to such insult.

“That is a good theory.”

Adenovirus link to hepatitis in children

Adenoviruses are common viruses that typically cause mild cold- or flu-like illnesses, and there’s a theory they could be responsible for the recent hepatitis cases too.

According to the UKHSA, adenovirus was the most common pathogen found in 40 of 53 confirmed cases tested in the UK.

The agency said that “investigations increasingly suggest that the rise in severe cases of hepatitis may be linked to adenovirus infection, but other causes are still being actively investigated.”

Public Health Scotland’s director, Jim McMenamin, said work was underway to establish if the adenovirus involved in hepatitis had mutated to cause more severe disease.

Another theory by the UKHSA’s recent briefing paper is that children from dog-owning homes may be at an increased risk.

According to the paper, “review of UK trawling questionnaire responses has found relatively high numbers of dog-owning families or other dog exposures in cases”.

It added that data is limited on background rates of pet ownership in families of young children. 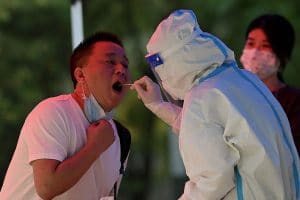