A dad has told of his family’s terrifying flee over the Ukraine border as his brother still desperately tries to escape the war-torn country.

Stuart McKenzie, 51, loaded his family, including his friar mother-in-law, into his car and made an 18-hour dash from Kyiv to Poland on Thursday morning as Russian troops advanced.

Yesterday (Monday), the Helensburgh man told the Lennox Herald they were safely bunkered down in a Krakow hotel and were trying to help as many other families as they could.

He told how they were awaiting the arrival of brother Robert, 43, also from Helensburgh, who had spent almost two days stuck in huge traffic jams on the road to the Polish border.

Healthcare firm boss Stuart said: “We are hardly sleeping and feeling exhausted. We’re trying to help as many people as we can with accommodation and food over here.

“We are really lucky to have got out when we did. We did a trial run a few days earlier which helped and we were prepared to go.

“There’s a tsunami of refugees trying to get over the border.

“My brother is on his way and is about 14km away from the border and is probably about a day-and-a half away.

“They are safe but in a dangerous situation.

“He’s with his two children, his sister, wife and mother-in-law. They’re in a convoy of two cars.

“It’s really rough conditions. They are having to turn off the engines to preserve fuel and it’s very cold.”

He added: “My brother has somehow managed to get some free beer and he’s sent me some pictures of them queuing.”

Stuart left his home in Kyiv, where he’s lived for 28 years, with sons Stuart, 12, and Robert, 15, for Lviv, last week after tensions escalated but returned home a couple of days later.

The family previously refused to leave their home, despite the UK Government urging Brits to leave, with Stuart saying he never believed an invasion would happen.

He said: “It seems to me that Putin is now showing his true colors as a megalomaniac who is seeking to stamp his mark on history, which means a living horror for millions of people. So many innocent people will die.

“I didn’t think this day would come – but I was wrong.

“I couldn’t sleep on Wednesday night and I was watching the news and realized the time had come to change plan.

“The car was loaded and the family was primed, so we just got on with the evacuation.

“We went to the small border exit, which we had researched as being the quick way, and it still took us nine hours to get through in the end.

“We left at 5am and got to our hotel after 10pm, so it was almost 18 hours. When we were leaving we could hear bombs landing. It was hard to believe it was true.

“I could see that anyone who left it until 10am to leave would get it so much worse than us.”

Stuart, 51, packed his Land Rover Discovery full of enough food to last a few days, a full tank of fuel plus extra in jerry cans to deal with any gridlock.

See also  Nurse 'scared' by Sheku Bayoh fought to save his life in hospital, probe hears

The family includes his sons, as well as wife Elena and mother-in-law Galina.

Stuart said they are trying to help other families as they arrive, including the many women and children turning up who have had to leave their husbands and fathers behind.

He said: “We would love to help them and I’m going to see what we can do to help them through the Rotary Club and Lions Club.

“I keep trying to focus on solutions rather than these stories because it really gets to you.

“Thank god the world has come together on this. There’s so much humanity and it really brings the best out of people.

“I was contacted by a nice Scottish guy who lives in Krakow and he is well connected so we are trying to help as many people as we can.

“The kids are okay. We’re keeping them out of many hard conversations and emotional talks. They are due to be back at school today but we don’t know how that will happen.

“They are used to working remotely during the pandemic but we don’t know how the schooling system will work with all this.

“The priority now is to get my brother over and get my staff over.

“Then we will look at the bigger situation. If this war doesn’t stop and we have to make a long term decision, then we need to think about where we can stay.”

He said he is holding out hope that talks due to be held yesterday (Monday) between Russia and Ukraine would result in a ceasefire, adding: “We never believed they would be so stupid to do this. Ukraine is really fighting hard.

“The Russian guys that are getting dropped off are young and they don’t know what they’re there for or what they’re doing.

“There are stories of them surrendering because they have nothing to fight for, while the Ukraine guys are fighting for the survival of their country.” 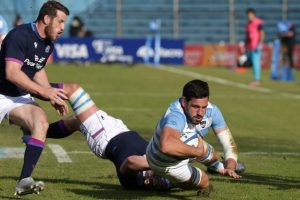