The Department of Security of the Basque Government and the Government of Navarra will activate different warnings and alerts during this weekend as a result of the snow and rain forecast.

The Department of Security of the Basque Government will activate this morning a orange alert for snow, whose elevation will descend to 400-500 meters on Saturday in the afternoon, although it could occasionally snow at lower points, and a yellow warning for rain Saturday I know will raise to orange on sunday.

The rainfall will be very abundant and persistent in the Cantabrian slope and occasionally they will be stormy and accompanied by hail. With these precipitations they could accumulate between 20 and 50 centimeters of snow at 1000 meters altitude and from 5 to 25 to 600 meters.

Rainfall will again be very abundant and persistent on the Cantabrian slope and during the first half of Sunday it may occur hail storms. For that day, thicknesses of between 20 and 40 centimeters at 1,000 meters and between 5 and 20 at 600 meters are expected.

The Department of Security will also activate a yellow warning for rains tomorrow Saturday since in the Cantabrian slope could accumulate between 60 and 80 liters per square meter in 24 hours. There will be very abundant and persistent rains, with the possibility of storms and hail.

Sunday will go to orange alert. The accumulated rain will be similar (60-80 liters on the Cantabrian slope) but during the afternoon-night the snow level will rise, which will favor the thaw and increase the flood risk.

Bad weather will have its reflection on the coast where a yellow notice for navigation throughout Saturday and until 3:00 p.m. on Sunday. In that interval waves will reach 4-5 meters, although its height will begin to decline on Sunday afternoon to fall below 3.5 meters.

On the other hand, the A-15 will close this Saturday at noon in both directions, from the Andoain junction to the Berastegi junction, in the Gipuzkoan section, due to the risk of snowfall. 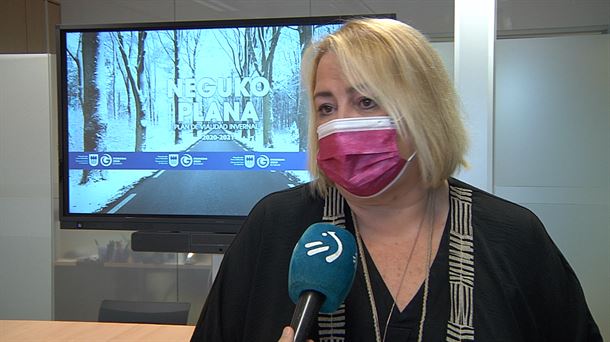 For its part, the Government of Navarra recommends circulating with caution on the Autonomous Community’s road network due to the possibility of accumulations of 5 cm snow in the Pyrenees from 1000 meters of altitude.

The Navarrese Pyrenees are on a yellow alert until 00:00 hours on Saturday, November 27, according to the State Meteorological Agency, which announces an orange alert for Saturday, with a forecast that the snow will also spread to the center of the community and accumulations of ten centimeters above 600-700 meters. On Sunday again the alert will be yellow.

For more updated weather information, you can consult it at any time at eitb.eus, as well as send your photos.