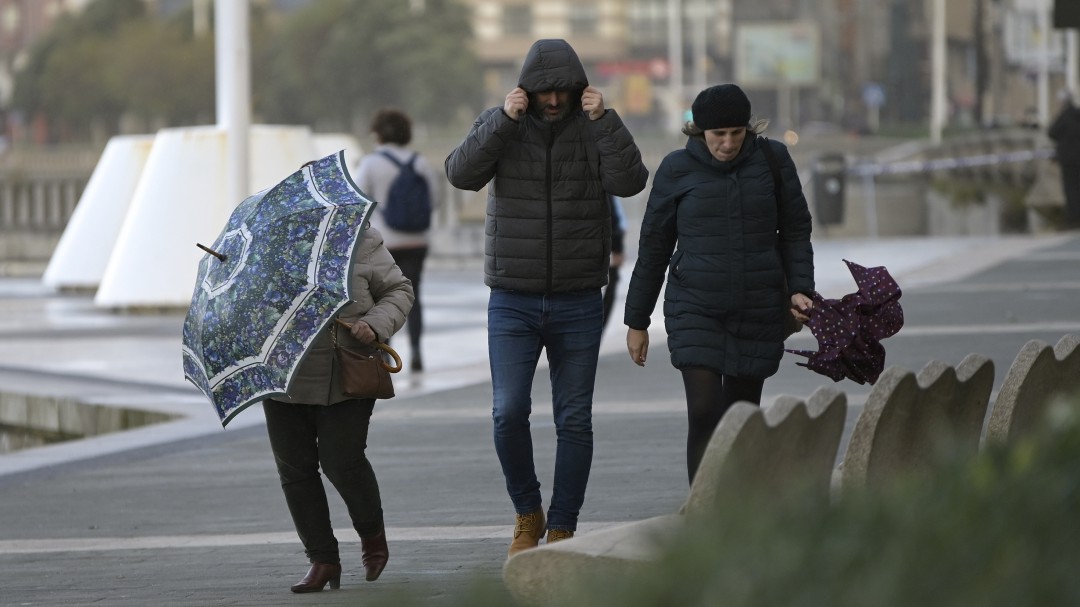 The State Meteorological Agency (Aemet) foresees for this Sunday locally strong or persistent rainfall in the west of Galicia, as well as intervals of strong wind in the coasts and high areas of the northwest of the peninsula, the Pyrenees, the Iberian system, the mountains of the east of the peninsula and the surroundings of Alboran.

Due to the transit of Atlantic fronts, cloudy or overcast skies are expected on the Atlantic and Cantabrian slopes, with rainfall that will extend from west to east throughout the day, Aemet reported. Rains that will be more intense in the northwest quadrant, where they can be locally strong or persistent in western Galicia, where they will be accompanied by a storm at the end, and with some persistence in mountainous areas.

In a weaker and more dispersed way, they will spread to the east, and may affect areas of the interior of the peninsula. On the eastern Mediterranean façade, Melilla and the Balearic Islands are unlikely. In the Canary Islands there will be cloudy intervals in the north, without ruling out some isolated precipitation. As for snow levels, in the Pyrenees it will snow around 1,800 / 2,000 meters and in the Cantabrian mountain range it will rise to more than 2,000 meters. Likewise, mists and fog banks, more probable and persistent in mountains, are not ruled out.

Maximum temperatures will increase almost widely, except in areas of the Mediterranean and western Andalusia, where there will be little change. The minimums will also be increasing in the interior southeast, and decreasing in the northeast. They will be above normal values, especially the minimum ones, with frosts only in the Pyrenees and points of other mountain ranges.

The wind will blow intense from the southwest, occasionally from the south in the surroundings of the eastern Cantabrian and upper Ebro, and will be strong or with intervals of strong in the coasts and high areas of the northwest of the peninsula, the Iberian system, the Pyrenees, the mountains of the eastern peninsula and the surroundings of Alboran. In the Canary Islands, variables tending to the north component.

– Galicia: For this Monday a cloudy sky is expected, with scattered rains at dawn that will become general throughout the morning and that can be locally strong, persistent in the afternoon in the southwest and with showers, without ruling out occasional storms, at the end of the day. Temperatures in slight rise in general. The wind will be from the south and at noon it will turn southwest and will increase at strong intervals, with very strong gusts in the northern half and high areas.

– Asturias: Cloudy or overcast sky, with rains that will spread from west to east from noon, and that will be more intense, even locally strong, in the southwest and more dispersed on the eastern coast. At the end of the day they will subside and there will be occasional showers, without ruling out a storm in mountain areas. Minimum temperatures without changes or in slight descent and maximum in ascent, slight in general.

– Cantabria: Cloudy intervals that will increase to cloudy or overcast skies, with light rains and scattered showers, which will move from west to east from noon and will be more frequent and intense in the southwest. Minimum temperatures unchanged or decreasing. The wind will be light from the south component, rolling temporarily to the east and southeast on the coast and will intensify at the end of the afternoon with very strong gusts in the Cordillera.

– Castilla y León: Cloudy or covered with generalized rainfall, which will spread from the southwest to the rest during the day, and which may be persistent on the southern slopes of the mountain areas of the western third. Snow level over 1,800 meters rising above 2,400 meters. Minimum temperatures slightly decreasing in the north and weak frosts in mountain areas. Winds from the southwest, with strong gusts, and very strong in northwestern and northern mountain areas.

– Navarra: Cloudy intervals increasing to cloudy or overcast. Light rains and scattered showers at the end of the day, which will move from southwest to northeast. Minimum temperatures falling, generally light; highs with little change. Variable loose wind tending to the south and southeast and getting worse at the end, with very strong gusts on the north face of the Pyrenees.

– La Rioja: Cloudy or covered with widespread rainfall in the second half of the day. Snow level over 1,800 meters rising above 2,200. Minimum temperatures in slight descent or without changes, and maximum in slight ascent. Winds from the southwest in the mountains, with strong gusts at the last hours, and variables in the valley tending to the southeast.

– Aragon: Cloudy intervals, tending to cloudy or overcast skies the second half of the day, when weak rainfall is expected. The snow level will be around 1,600-1,800 meters and low strata and fog banks are expected in the early hours in the Ebro depression, which will dissipate during the morning. Minimum temperatures slightly decreasing in the northern half and weak frosts in the Pyrenees. In the Iberian system, a loose wind from the west that will increase in intensity at the last hours; in the rest, a loose variable.

– Catalonia: Cloudy sky during the afternoon with probable weak and scattered precipitations in the western fringe at the last hours, with the snow level around 1,600-1,800 meters. In the morning, low strata and fog banks in the central depression, which will be dispersing throughout the morning. Temperatures, both minimum and maximum, in slight decrease or without changes. Weak frosts in the Pyrenees.

– Extremadura: Cloudy or covered with precipitations that can be persistent in the north of Cáceres, and weaker and occasional in the province of Badajoz. Mists and fogs in high areas and temperatures unchanged or slightly rising. Winds from the southwest, with strong gusts in the Central system.

– Community of Madrid: Very cloudy or overcast sky and weak rains from the morning that will be somewhat more intense in the afternoon and will remit at the end of the day. Mists in the mountains and mist, and some fog banks in the rest at the beginning and end of the day. Minimum temperatures with few changes and maximums slightly ascent. Variable loose wind, tending to the south and southwest from the afternoon.

– Castilla-La Mancha: Very cloudy or overcast and light rains that will spread from the west and will be more dispersed at the end of the day. Mists in high areas and mist and a bank of fog in the rest at the beginning of the day. Temperatures slightly rising, except for the minimum in Guadalajara where they will remain with little change. The wind will be light from the west component and the southwest will predominate from the afternoon, when it will blow with more intensity.

See also  Heart warning as 300,000 people in UK have 'deadly' condition – symptoms to look out for

– Valencian Community: Cloudy intervals that will tend to cloudy or covered the second half of the day, when weak and scattered rainfall will be likely, especially in the interior. Minimum rising and maximum temperatures with few changes. West wind, loose with intervals of greater intensity.

– Region of Murcia: Cloudy or overcast sky without ruling out weak and occasional rainfall in the interior, more likely in the mountains. Rising temperatures and westerly winds.

– Andalusia: Cloudy sky that will tend to cover with occasional, more intense and frequent rainfall in the mountains and from the afternoon, and less likely on the Mediterranean side. Mists and probable fog banks in the interior and minimum temperatures rising in the eastern interior, decreasing in the extreme west and with little change in the rest. Highs on the rise in the southern half and unchanged in the other areas. West component wind, with strong intervals and occasionally very strong gusts in the eastern Mediterranean coast and eastern highlands.

– Canary Islands: Little cloudy during the early morning and early hours that it will tend to cloudy in the afternoon, except on peaks that will remain slightly cloudy above about 1,800 meters. Temperatures with few changes in general, although there is a probability of rising lows in high areas of the islands of greater relief and of lowering of the maximums on the south coast of Lanzarote. Variable light wind with a predominance of breezes that will turn to a light northeast at the end of the day.