The strong rains they have caused this Thursday river overflows, water ponds, and minor road problems, with special incidence in two rivers, the Zadorra and the Cadagua, which have already caused flooding in towns such as Vitoria-Gasteiz or Güeñes.

Throughout the day, more than 200 incidents have been registered, of which 45 were still open, in the process of being resolved, at 6:00 p.m.

The river that has caused the most problems and that is most disturbing for tonight is the Zadorra, overflowed after opening the floodgates of the reservoir to drain, which has meant that downstream, when crossing Vitoria-Gasteiz, it has left its channel.

Vitoria neighborhoods such as Asteguieta, where it has flooded two portals and a score of residents have had to abandon their homes, or towns such as Trespuentes and Víllodas are the ones that have suffered the most, as they are located on the banks of the Zadorra.

But the worst may be yet to come this Thursday night, and during the early hours of Friday, since the Zadorra reservoirs will receive almost twice the water they evacuate in the next 24 hours, according to data provided by the Basque water agency URA, which raises concerns that the overflow of the riverbed in Vitoria-Gasteiz will worsen .

However, URA highlights that the reservoirs continue to contain the flood in the Zadorra, as they still have some margin to receive water.

The other river that has exceeded its channel at various points has been the Cadagua, especially in Güeñes and Sodupe. The water has flooded some surrounding streets, although without causing serious damage, and access to the La Quadra neighborhood has been cut off.

There have also been minor problems with the river Nervión, which has overflowed in Basauri, in the section located under the A-8 motorway, and with the Butrón river, in the center of Mungia, as well as with the Gobela, in Larrañazubi, where the road that connects Berango with the Fadura sports center.

In addition to the problems at these points, the storm has left striking images, such as those that occurred in a Landslide which has cut the Adif tracks between Brinkola, in Legazpi, and Beasain. It occurred at 1:15 p.m. and affected a commuter train, from which 14 people had been evacuated, none of whom were injured.

The company has enabled a bus transfer for proximity only between Beasain and Brinkola, since from the first town to Irun the trains operate normally; but the event also affects medium-distance travelers heading to Madrid, who must alight from the train in Tolosa and will be transferred by bus to Alsasua, from where they will continue by train to the Spanish capital.

In the corridor of TxorierriAt the height of Sondika, a tree has fallen on a car, and it has forced to cut two lanes of the highway momentarily, although it is a problem that has already been solved. In the late afternoon, a tree fell on the GI-627, which was cut off at Leintz-Gatzaga.

Between Markina and Gernika, a score of students had to be rescued by zodiac by firefighters, after their bus was trapped in a large raft of water.

The Minister of Security, Josu Erkoreka, has advanced that the water peaks in the rivers and basins are expected to be tonight in Bizkaia and at dawn in Gipuzkoa, while in Álava, as already mentioned, the Zadorra worries . The rains will continue, and the Orange alert released by persistent rainfall until 3:00 p.m. on Friday. 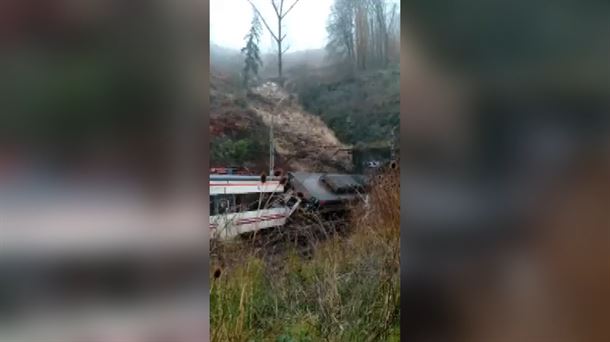 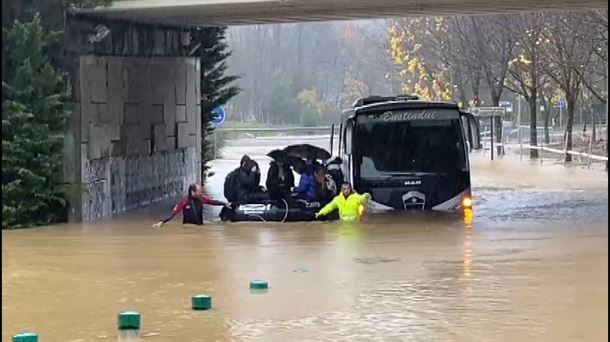 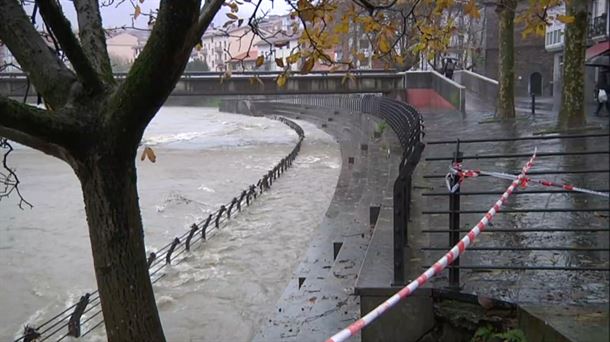