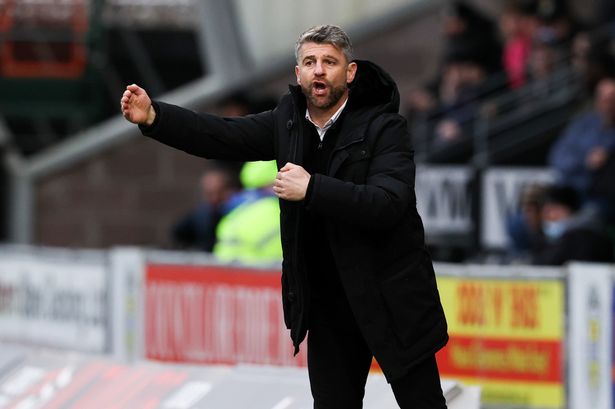 Stephen Robinson’s tenure as Saints boss got off to a sticky start after Hearts ended their unbeaten run in Paisley.

The Buddies gave their new manager a warm welcome as he took his first game in charge since replacing Jim Goodwin in the dugout.

But their challenge of breaking down third-placed Hearts was made a lot tougher when Connor Ronan saw red early in the first half for a heavy challenge on Beni Baningime.

The Saints managed to stay level until well into the second half, in large part thanks to some heroic goalkeeping from Jak Alnwick who pulled off a series of close-range saves from Liam Boyce.

The Jambos made the three points secure when Simms again drew a save from Alnwick, with the ball this time falling kindly to Cammy Devlin who slammed in from the edge of the box.

The loss was the Buddies first taste of defeat in nine, with Robinson now facing a tough task to pick his new side up ahead of a difficult trip to Celtic Park on Wednesday night.

While Robinson was hoping to capitalize on the positivity surrounding his appointment, it was the visitors who quickly dominated proceedings early on.

Hearts winger Barrie McKay was looking lively and he teed up Liam Boyce on the edge of the box. The Northern Ireland international fired wide.

Kingsley was next to pick out the striker, sweeping in a cross for Boyce who headed straight into the grateful arms of Saints stopper Jak Alnwick.

The Buddies number one came to the rescue once again for the home side, denying the same player at the back post.

The Jambos were undeniably on top and Gary Mackay-Steven picked out Cammy Devlin after a bursting run down the left wing. The Aussie midfielder slammed over the bar with Alnwick pleased to see that chance spurned.

The Buddies were given a mountain to climb when Connor Ronan snapped into a tackle with Beni Baningime. Referee Greg Aitken took a long time to eventually decide to dish out a red card.

The red card seemed to shock Saints into life, with Nathan Atkinson picking up the first yellow card of the game for wiping out Jordan Jones as he looked to break down the wing.

Jones won St Mirren a corner on the half hour mark as the Buddies made inroads into the Hearts half, with Alex Gogic thundering a header goalwards from the resulting corner. It clattered off a defender before deflecting narrowly wide.

Saints were calling for a penalty from the following set piece when Atkinson leaned on Alex Greive inside the box. Aitken waved away the protests, much to the disgust of the increasingly irate home support.

Kiltie was next to earn the Saints a corner after a bustling run down the right flank. Jones picked out skipper Joe Shaughnessy, who headed over the bar with Craig Gordon rooted to the spot.

The Buddies were more than happy to get into the break level, giving Robinson a chance to reorganize his 10-man side.

See also  Manchester United vs Chelsea prediction and odds: No reason to expect United to end grim run of form

The visitors started the second half on the front foot, with the challenge looking increasingly difficult for the Buddies.

Alnwick was to be busy once again and pulled off yet another point-blank save from Boyce to keep the scores level. An incredible stramash followed, with the Buddies defense somehow managing to scramble the ball clear.

The second half was no less heated, with a Cammy Devlin volley into Alan Power sparking more drama. Both players were booked after squaring up to each other.

The Saints were hanging on for dear life but eventually the pressure told. McKay skipped past Shaughnessy on the left wing before fizzing a cross into the box.

Dunne couldn’t quite reach it with the ball eventually falling to Elliot Simms. Alnwick pulled off yet another superb stop from point-blank range, but the ball fell kindly for the substitute to eventually break the deadlock.

The Jambos smelt blood and a Beni Baningime pass split the defense to send Simms racing through on goal yet again.

Alnwick saved initially but the ball bounced straight into the path of Devlin, who slammed home from the edge of the box to double Hearts’ lead.

Simms was causing all sorts of problems after entering the fray, with Alnwick tipping his fierce strike onto the top of the bar.

In the end the Edinburgh side cruised to full-time, with St Mirren now facing a tough trip to Celtic Park on Wednesday night.

See also  Sunscreen buying guide 2022: What does SPF mean and which one is right one for you?