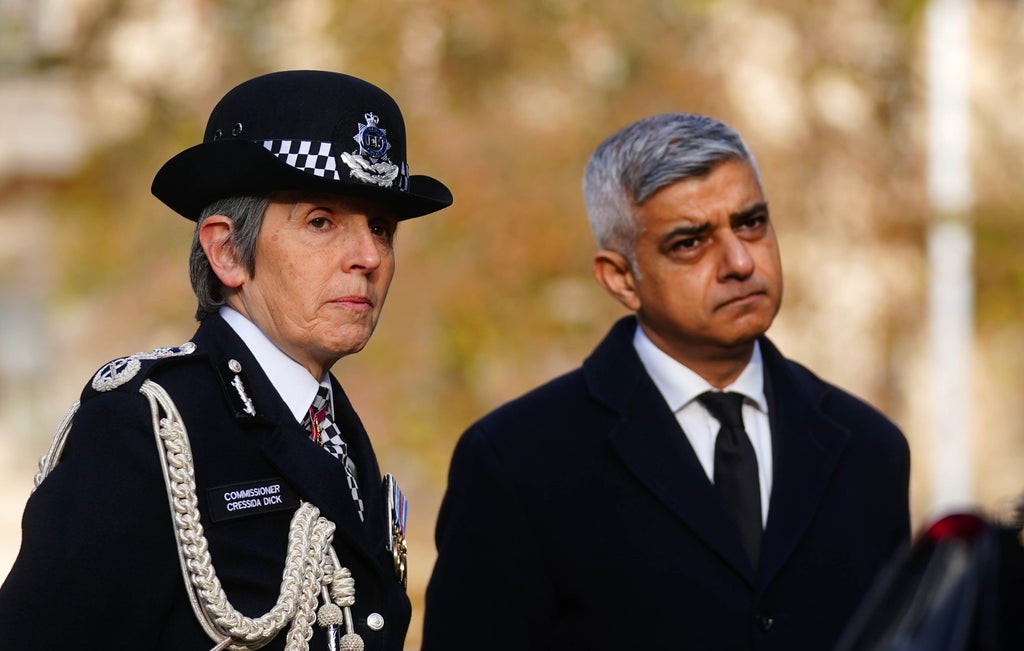 The Commissioner has faced a series of scandals during her time leading Britain’s biggest police force – most recently violently racist, misogynist and homophobic messages exchanged by officers based at Charing Cross police station that were published by a watchdog.

The force also faced criticism over its apparent hesitation to launch an investigation into parties allegedly held in Downing Street and the Cabinet Office during lockdown.

And there was fury over the rape and murder of Sarah Everard by a serving officer, as well as the force’s actions following her death in tackling a vigil held in her memory during coronavirus restrictions, and issuing clumsy advice telling women in trouble to flag down a passing bus that later had to be retracted.

Last summer the notorious 1987 unsolved murder of Daniel Morgan also hit the headlines, with an independent panel accusing the Metropolitan Police of institutional corruption over the case.

On Thursday evening, in a shock statement, Dame Cressida announced she was stepping down from the job, despite hours earlier having insisted she had no intention of going.

She said: “It is with enormous sadness that following contact with the Mayor of London today, it is clear that the Mayor no longer has sufficient confidence in my leadership to continue.

Hours earlier, when asked by the BBC if she should step down she said: “I have absolutely no intention of going and I believe that I am and have been, actually for the last five years, leading a real transformation in the Met.”

The Mayor of London Mr Khan had earlier this week indicated that Dame Cressida’s future hung in the balance over her response to problems with the culture within the Met, and how to restore the public’s confidence in the force.

On Thursday he said: “Last week, I made clear to the Metropolitan Police Commissioner the scale of the change I believe is urgently required to rebuild the trust and confidence of Londoners in the Met and to root out racism, sexism, homophobia, bullying , discrimination and misogyny that still exists.

“I am not satisfied with the Commissioner’s response.

“On being informed of this, Dame Cressida Dick has said she will be standing aside.

“It’s clear that the only way to start to deliver the scale of the change required is to have new leadership right at the top of the Metropolitan Police.”

He added: “I will now work closely with the Home Secretary on the appointment of a new Commissioner so that we can move quickly to restore trust in the capital’s police service while keeping London safe.”

Home Secretary Priti Patel, who has reportedly had past clashes with Dame Cressida, praised the officer’s “steadfast dedication”.

She said: “I’d like to thank Dame Cressida for the nearly four decades of her life that she has devoted to serving the public, latterly as Commissioner of the Metropolitan Police.

“She would be the first to say that she has held the role during challenging times; yet for nearly five years she has undertaken her duties de ella with a steadfast dedication to protecting our capital city and its people, including during the unprecedented period of the pandemic.

“Leading the Met has also involved driving our national counter terrorism capability at a time of multiple threats while as the first woman to hold the post, she has exemplified the increasingly diverse nature of our police and demonstrated that all can aspire to hold leadership roles in policing in this country today.”