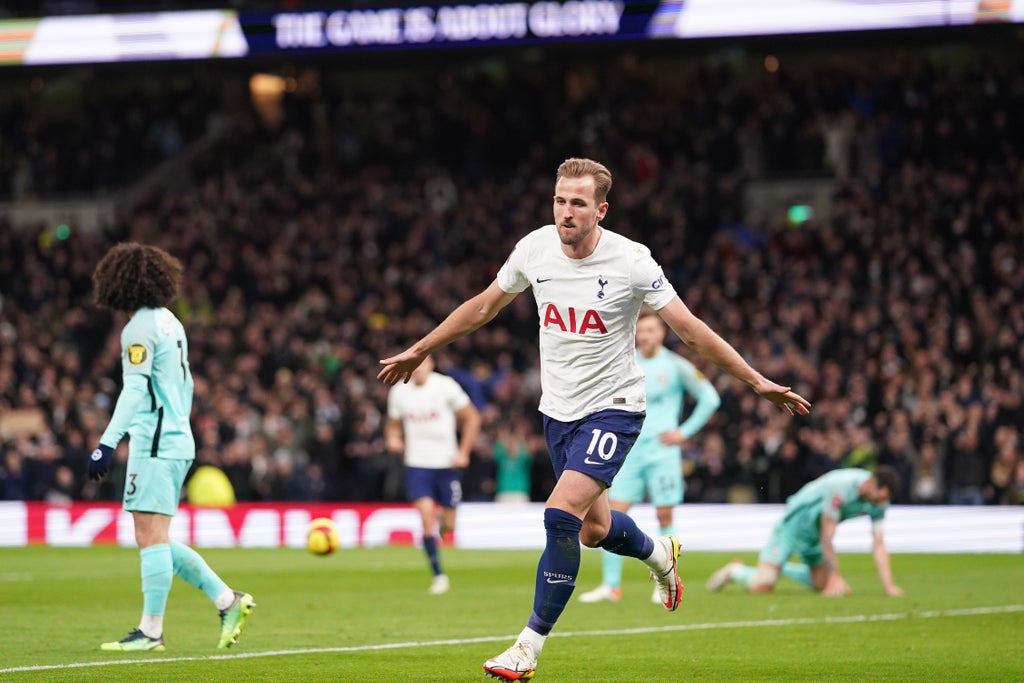 The England captain struck in either half to move to 236 goals for Spurs, just 30 shy of Jimmy Greaves’ all-time record, with the hosts also benefitting from Solly March’s first-half own goal.

As much as individual honors matter to Kane, it is silverware that really drives him and he will be desperately hoping his boyhood club can progress in this competition and end a 13-year trophy drought.

It was a good night for Spurs, who introduced new signings Dejan Kulusevski and Rodrigo Bentancur, as Antonio Conte’s formula continues to take shape.

Brighton briefly threatened a comeback when Yves Bissouma made it 2-1 in the second half, but they bowed out of the competition, having contributed to their own downfall.

Adam Webster will not want to see the replays as Tottenham took a 13th-minute lead.

The visitors had a let-off moments before as goalkeeper Robert Sanchez’s pass across goal was cut out by Kane, but the England captain could not make proper contact with his attempts towards goal.

But, as Sanchez tried to recycle possession again, the Seagulls made another mistake that this time was punished.

Under pressure Webster mis-kicked a pass, Pierre-Emile Hojbjerg sent the ball on to Kane and Tottenham’s main man did the rest, curling into the top corner from 20 yards in sublime fashion.

It was 2-0 11 minutes later and there was a large amount of fortune involved.

Emerson Royal ploughed a lone furrow down the right and his cross, with no one in the area, deflected off March and over Sanchez for an own goal.

Spurs were clearly in the mood and it should have been 3-0 five minutes later as a fast break saw Kane played in by Hojbjerg.

The striker looked set to score his second as he cut inside, but his chipped effort was off target and Son Heung-min could not turn it in at the far post, although he was offside anyway.

Kane had further chances to add to his tally before the break, but he mis-controlled when in on goal and then saw Sanchez palm away at low effort.

The Seagulls tried to rally before the break, but Neal Maupay skewed an effort over following good play by Bissouma, while Jakub Moder fired over from the edge of the area.

They started the second half well and Hugo Lloris was forced into a smart stop to keep out a Bissouma deflected effort which foreshadowed what was to come in the 63rd minute.

After a spell of Seagulls pressure, Bissouma was allowed to run across the face of goal and got another shot away, which this time deflected off Hojbjerg and wrongfooted Lloris to give the visitors a way back into the game.

That hope did not last long as Spurs restored their two-goal lead just three minutes later as Kane got his second, but it was Son who did all the hard work.

The South Korean embarked on a run reminiscent of his Puskas Award-winning goal against Burnley, beating several Brighton defenders before eventually being stopped by Webster.

But the defender’s tackle sent the ball towards goal and Kane slid home from close range.

Brighton should have immediately reduced the arrears again, but Maupay shot straight at Lloris when racing clear on goal.

Spurs were able to hand debuts to new signings Kulusevski and Bentancur and went on to miss a hatful of chances to close the game out.

Steven Bergwijn skied a sitter from eight yards out after being teed up by Kulusevski, while Sergio Reguilon fired straight at Sanchez but Spurs were already home and dry.