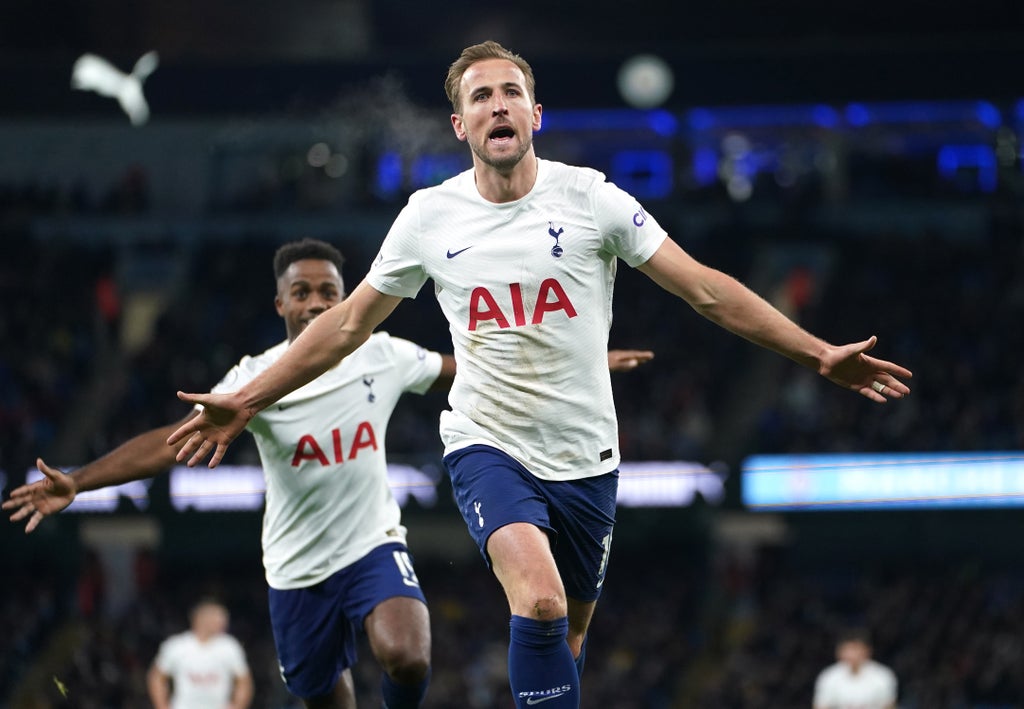 Harry Kane scored two goals to earn Tottenham a dramatic 3-2 win over Manchester City, whose lead at the top was cut to six points after Liverpool came from behind to defeat Norwich.

The England captain showed the club he looked set to join last summer what they missed out on as City’s 15-game unbeaten run was ended.

After playing his part in Dejan Kulusevski’s opener, Kane put Spurs back in front following Ilkay Gundogan’s equalizer with a sublime finish before delivering late drama at the Etihad Stadium.

Riyad Mahrez’s stoppage-time penalty had looked like stealing City a point but Kane, who also had a goal ruled out by VAR during the match, had other ideas, heading home the winner in the fifth minute of time added on.

The result was a huge boost to Liverpool’s title hopes after they battled back to beat Norwich struggling 3-1 earlier on Saturday.

The Reds, who also boast a game in hand on City, fell behind to Milot Rashica’s deflected 48th-minute shot but turned the game on its head with two goals in four minutes just after the hour mark.

Sadio Mane’s overhead kick drew the teams level before Mohamed Salah gave the hosts the lead with his 150th goal for Liverpool, a clever shot that wrong-footed the defence. A maiden Liverpool goal for January signing Luis Diaz then wrapped up all three points for Jurgen Klopp’s men.

At the other end of the table, relegation-threatened Burnley climbed off the foot of the standings with a 3-0 win at Brighton.

Holland striker Wout Weghorst scored his first goal for the club, before Josh Brownhill’s deflected shot doubled the visitors’ advantage. Aaron Lennon’s second-half strike then added to the Clarets’ joy as they cruised to a first win in 12 top-flight games.

The Morocco international had been denied earlier when Romelu Lukaku was deemed to be offside, but his late goal strengthens the Blues’ hold on third position.

Emmanuel Dennis ended Watford’s three-month wait for a victory as Roy Hodgson celebrated his first win in charge on the road at Aston Villa.

Dennis headed home a cross from Ismaila Sarr to seal a 1-0 win, Watford’s first victory since a memorable win against Manchester United in November.

England duo Emile Smith Rowe and Bukayo Saka were on target as Arsenal beat Brentford 2-1 to move within a point of the top four.

Smith Rowe, making only his second start since December 2, broke the deadlock and Saka added a second before Christian Norgaard struck a last-gasp consolation for the Bees.

In the early kick-off, Newcastle’s revival under Eddie Howe continued with a hard-fought point in a 1-1 draw at top-four hopefuls West Ham.

Joe Willock’s equalizer canceled out Craig Dawson’s header as the Magpies made it six Premier League games unbeaten, despite going into the game without key duo Allan Saint-Maximin and Kieran Trippier.