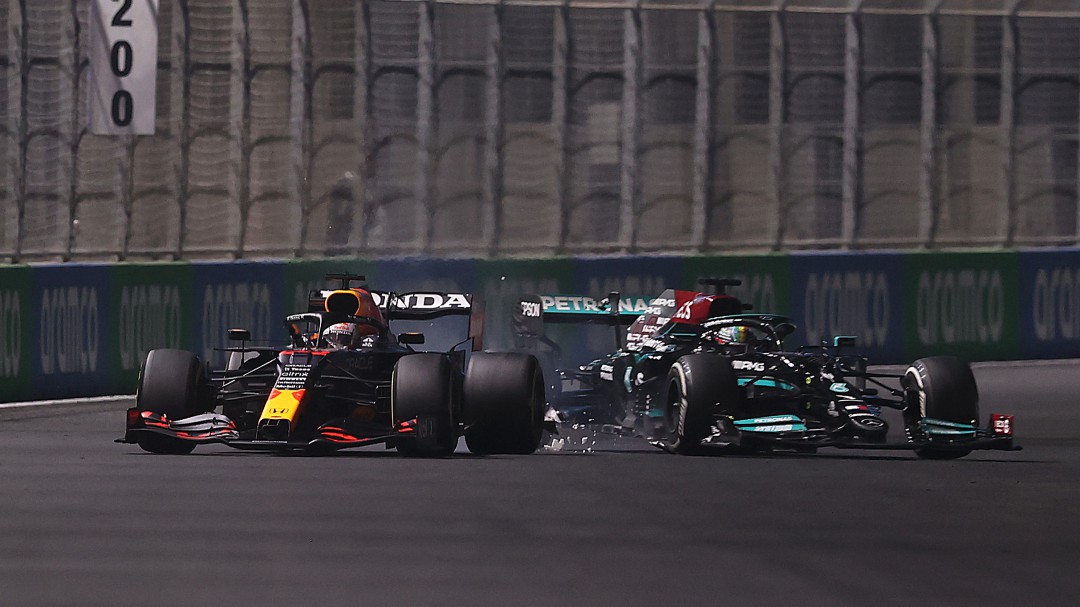 Madness, lack of control and controversy were the main ingredients of the Saudi Arabian Grand Prix. Three starts, two red flags, four virtual safety cars, several collisions between Hamilton and Verstappen, including a crash … The victory went to the Briton who, thanks to the fastest lap, is tied with the Dutchman with only one race to go to the end of the World Cup.

The race started with a respectful start, with a little scare from Checo Pérez, who almost took his teammate away. The first three held their positions and distanced themselves from each other. From behind, Alonso climbed to 10th position, although he was subsequently overtaken by several riders, including Carlos Sainz, who had already started the comeback.

The big mess began on the tenth lap with the accident of Mick Schumacher, who crashed his Haas against the barriers. Race direction deployed the safety car, and drivers like Hamilton, Bottas or Pérez opted to change tires. Verstappen did not, who went on to lead the race. But, four laps later, the safety car went to the red flag to repair the barriers. This allowed Verstappen to change his tires and not lose position, making him first, followed by Hamilton and Bottas.

Then came the second exit, far from quiet. Hamilton outperformed Verstappen and took the lead before the first stop. He did not leave room for a Verstappen who braked very late and went on the outside, returning to the track in first place. Ocon had placed second, and behind there was a strong accident that caused the abandonment of Pérez, Mazepin and Russell. Again, red flag and everyone to the pit lane.

There the battle took place in the trenches, that of the radios. Mercedes demanded that Verstappen return the position for having advanced on the outside. The FIA ​​then began to negotiate punishment with Red Bull, offering its driver to come third. Michael Masi’s surreal marketing was resolved with Ocon coming out first, followed by Hamilton and Verstappen. The Alpine man found himself on pole, and in the middle of a battle he surely didn’t want to be in.

The third start in 17 laps was not smooth either. Hamilton outperformed Ocon and took the lead, but Verstappen trailed behind, braking later than anyone else to lead the race. Hamilton got involved in a sandwich and managed to save his front wing, but was third. It took little time to get Ocon out of the way, and that was when, still with more than half the race to play, the persecution of the World Cup leader began.

But the chase was stopped numerous times by various virtual security cars. The first, by a touch of Tsunoda with Vettel, who left the front wing of the Japanese in the middle of the track. Then there was a clash between Raikkonen and Vettel, again, which left several pieces of car. There were so many pieces detached that three more virtual security cars came out due to this incident.

Once the unforeseen events were over, the battle for the World Cup was unleashed. Hamilton opened DRS on the straight and overtook Verstappen, but the Dutchman barely stopped, the two went on the outside and the Red Bull one maintained the position, in a maneuver similar to the one that caused so much controversy in Brazil. Hamilton and Mercedes asked for a sanction, and the FIA ​​opened an investigation.

It was then that the Hamilton-Verstappen war reached its most tense and contentious point. Verstappen braked in the middle of a straight, nearly stopping his car, and Hamilton hit him from behind. The Briton’s front wing received a lot of damage, and Verstappen claimed he was giving up the position by overtaking on the outside earlier. Fury broke out in Mercedes, who saw an extremely dangerous maneuver by Verstappen. The Red Bull driver received a five-second penalty for overtaking on the outside, and there was no news of his controversial braking.

Again, Verstappen gave up the position to Hamilton, although he returned the overtaking immediately, so he had to give it up once more. Hamilton went on to lead the race to the finish, setting fastest laps despite damage to his wing, thus getting the extra point for setting the fastest lap of the race. The Briton added 26 points for his victory, Verstappen was second despite a five-second penalty, and the podium was completed by Valtteri Bottas, who overtook Ocon at the last corner. Sainz was 8th, overtaken by his teammate Leclerc on the final lap, and Alonso, who had many problems, including spinning, was 14th on a bad weekend.

The World Cup arrives next week in Abu Dhabi, where the champion will be decided. Verstappen and Hamilton come tied on points, although the leader is still the Dutch for taking one more victory. The math is simple: whoever is ahead in Abu Dhabi wins the World Cup. And, in case of a abandonment of the two, the championship will go to Verstappen. Just seven days to know the winner of one of the best seasons in history.