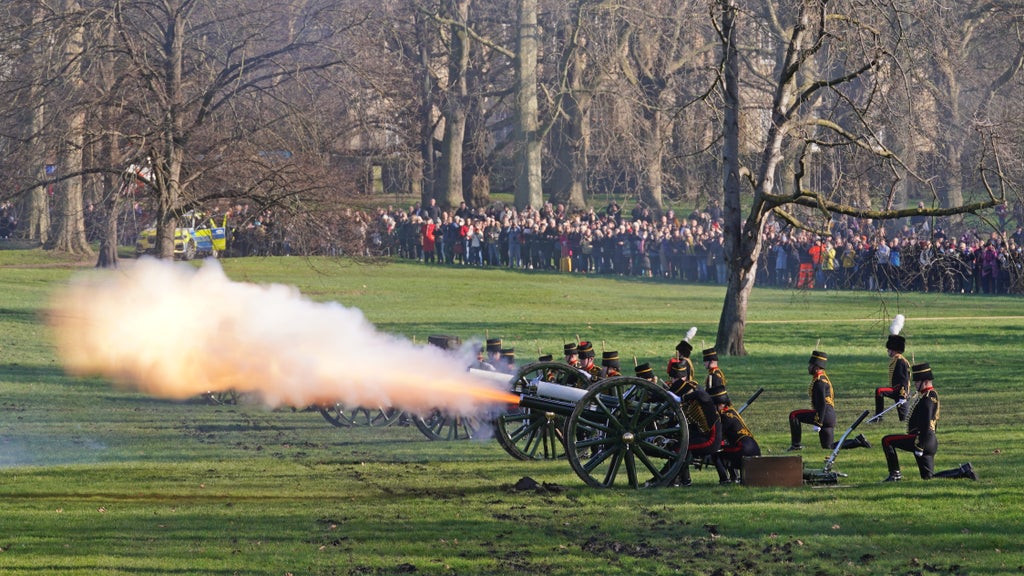 The Queen’s Platinum Jubilee celebrations began with a bang, as gun salutes were fired across the country to mark her 70-year reign.

Events will be held over the coming year in honor of the Queen, who at the weekend renewed her 1947 pledge to the nation and Commonwealth “that my life will always be devoted to your service”.

The ceremony took place a day after February 6, Accession Day, when Princess Elizabeth became Queen Elizabeth II, as the anniversary fell on a Sunday.

Lieutenant Colonel James Shaw who as Brigade Major of the prestigious Household Division oversees the Army’s big ceremonial events, said: “For me this is the launch of the Platinum Jubilee, this is where it all starts for all of us and as a country.”

Monday was his first day in his role as Brigade Major, and he faces a busy 2022, saying: “This is no doubt a career highlight for me, I’m honored to be involved.”

He added: “On June 2 we’ve got the Queen’s Birthday Parade, with 1,400 troops involved in that, and on June 5 there’s the pageant and the armed forces will also be involved.

“I’m going to be heavily involved in the planning for both events, so really exciting.”

A Platinum Jubilee medal will be presented to members of the armed forces, emergency services and others to mark their service.

They can be worn from today but it is likely the Trooping the Color ceremony will be the first time they will be worn by the military.

Medals have been awarded to mark royal jubilees since the Victorian period, when the 50th anniversary of Queen Victoria’s reign was commemorated in 1887.

In recent decades medals have been issued to mark the Queen’s Diamond Jubilee in 2012, Golden in 2002 and Silver in 1977.

Lt Col Shaw, who was wearing his Platinum Jubilee medal ribbon, said: “There’s a huge amount of pride in being able to wear it and it demonstrates that strong bond between the sovereign and the armed forces.

“It’s a huge honor and signifies a massive moment for all us and the country.”

The extended four-day Platinum Jubilee weekend will begin on Thursday June 2 with Trooping the Colour, which will be staged in full for the first time since the pandemic.

A service of thanksgiving for the Queen’s reign will be held at St Paul’s Cathedral the following day.

Other highlights include a day at the races for the Queen and her family, who will fill the royal box for the Derby, held at Epsom Downs on the Saturday.

Later that day a star-studded concert will be staged from Buckingham Palace.

Communities across the country will sit down together for the Big Jubilee Lunch on the Sunday, the final day of the Bank Holiday weekend, and the Platinum Jubilee Pageant will also be held in the capital, featuring more than 5,000 people from across the UK and Commonwealth .

See also  How to get details for A-level and GCSE papers from AQA, OCR and Edexcel