A Greggs superfan is heading to Scotland to visit all 230 stores as part of a ‘sausage-roll’ tour.

Megan Topping, 27, claims to have eaten more than 10,000 Greggs sausage rolls, and will be touring the whole of the UK to purchase on each of its 2,078 bakeries.

To visit the furthest north Greggs in Scotland at Inverness she will have to travel a 766-mile round trip from her home in Middleton, Greater Manchester, The Daily Express reports.

The bartender says that the long journeys up and down to Scotland mean the challenge could take years to complete.

She describes herself as “completely and utterly Greggs mad” and told Hull Daily Mail: “I go [to Greggs] almost every day and have done for years.

“People think this is a bit of a joke, but genuinely Greggs has been important throughout my life and I’m so grateful it exists. It sounds crazy, but even if I’m travelling, the first thing I look for is a Greggs.

“I hope to hit every single one and I’ve booked some time off work later this year, so I hope to start making real progress towards completing my goal.”

In 2016, Greggs had 239 stores in Scotland, but that number is higher now due to new bakeries opening as far north as Inverness for the first time last year.

So far, Ms Topping has visited every outlet in Greater Manchester, checking off a dozen shops since lockdown ended last summer.

She said: “I just saved up for the car so I could make this epic sausage roll trek.

“I couldn’t be more excited. I work a lot and I wanted to do something fun with my life, so I thought, ‘Sod it, why not?’ I think it will take a few years at least, but I’m game.”

She spends about £300 a month in Greggs a month but despite this, she has a body mass index (BMI) of 18.6 – within the NHS 18.5 to 24.9 healthy range. She said she does squats to stay fit, albeit while eating a cheese and onion bake.

Her typical pre-work order includes two hot sausage rolls, a vegan sausage roll, a box of filled donuts and a steak bake. And, if she is feeling like treating herself, she might also get a ham and cheese baguette.

She said: “The sausage roll is the best thing Greggs does, hands down. I love it fresh out of the oven.

“It’s still my favorite thing and going strong after all these years. They created one of the best recipes in the world.

And now she cannot wait to get started on her tour of the UK. Ms Topping, who has even created a spreadsheet to keep track of her progress, said: “I’m looking forward to getting in the car and starting my road trip. I love it because I will be able to see so much of the UK, which I’d never have seen otherwise.”

See also  "In a month it would be another story": the factor that should concern Real Madrid for future Classics | The spar 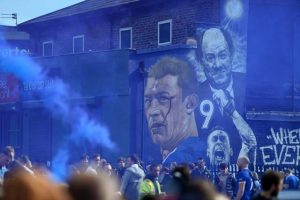