Skip to content
Home News GOP now looks to censor Cheney and Kinzinger, not just them 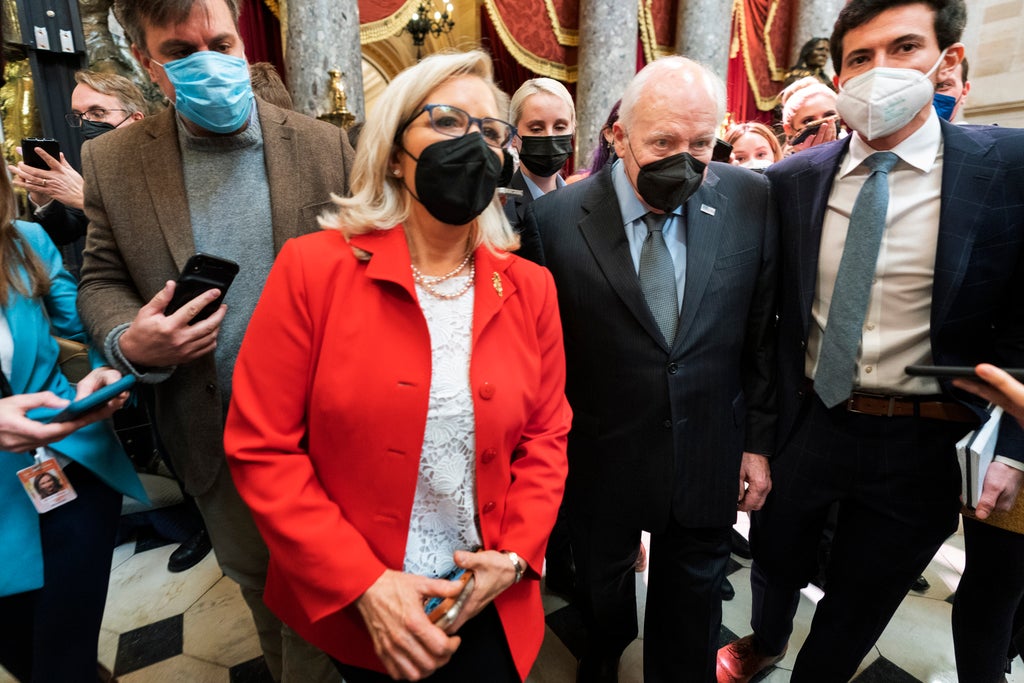 Republican officials meeting in Utah advanced a watered-down resolution Thursday that would formally censor GOP Reps. Liz Cheney and Adam Kinzinger for their perceived disloyalty to former President Donald Trump but did not seek to expel them from the party.

The resolution’s passage through a subcommittee followed hours of hand-wringing over language that initially would have called on the House Republican Conference to oust Cheney and Kinzinger, the only Republicans on the House committee investigating the Jan. 6 insurrection at the Capitol. The censorship resolution is expected to be voted on Friday by all 168 Republican National Committee members at their winter meeting in Salt Lake City.

“We want to send a message that we’re disapproving of their conduct. It’s a middle ground,” RNC member Harmeet Dhillon said, adding that the vote was unanimous.

The effort to punish Cheney, of Wyoming and Kinzinger, of Illinois, comes as party officials juggle preparation for this year’s midterm elections, when control of Congress and 36 governorships are at stake, with planning for the 2024 presidential election. In Salt Lake City this week, they’ve discussed where to host their 2024 party convention and whether to compel their candidates not to participate in presidential debates, a cause important to Trump.

But the last-minute change to the resolution puts into question Trump’s overarching influence on a party apparatus that has largely acquiesced to his wishes. The former president and other GOP members were incensed when Kinzinger and Cheney agreed to House Speaker Nancy Pelosi’s invitation to join the Democratic-led House committee investigating the insurrection, giving the panel a veneer of bipartisan credibility.

Not every RNC member was supportive of the initial draft resolution for expulsion.

“It’s distracting from what should be our main objective: winning back the House and the Senate. We should be focused on taking on Democrats and not each other. This is not time well spent,” Bill Palatucci, a committeeman from New Jersey, said of the effort to punish Cheney and Kinzinger.

The resolution to expel Cheney and Kinzinger was spearheaded by David Bossie, a Maryland committee member who previously served as a Trump campaign adviser, and Frank Eathorne, chair of Wyoming’s Republican Party. Eathorne declined to comment on the revised resolution after its passage.

The initial draft, obtained by The Associated Press, had accused Cheney and Kinzinger of serving as “pawns amounts to parrot Democrat talking points” on the Jan. 6 House committee and chided them for deposing their colleagues and “pursuing what to a third political impeachment of President Trump.”

“The Conference must not be sabotaged by Rep. Liz Cheney and Rep. Adam Kinzinger who have demonstrated, with actions and words, that they support Democrat efforts to destroy President Trump more than they support winning back a Republican majority in 2023,” it said .

The RNC has no formal power over the party’s congressional members, so how much weight a resolution to expel them from the House Republican Conference would have carried in Congress if passed is unclear.

Kinzinger said before the vote that he was unfazed by the resolution and already felt like an outcast in his party.

See also  Dogs For Different Lifestyles: These are the 10 most and least active breeds of adorable dog 🐶 from the lazy Bichon Frize to the bouncy Labrador

“I’m not gonna lose any sleep over it. Ultimately, if this does come to fruition, I think all that does is shows more about them than us. It shows that Trump and Trumpism has overtaken the RNC,” he said.

Cheney has already been censored by the Wyoming Republican Party, but the voters who will determine her fate are less conservative than party insiders. Wyoming allows voters to change party affiliation at the polls, meaning Cheney could draw enough independence and even Democratic support to prevail in the Republican primary Aug. 16.

Cheney over the past year has raised $7.2 million, ranking ninth among all US House candidates, according to the Federal Election Commission. That included over $2 million over the last three months of 2021, more than four times as much as her leading primary opponent raised, and Cheney finished the year with over 10 times as much campaign money.

Cheney wouldn’t specifically answer questions about the resolution but referred to a previous statement in which she said she didn’t recognize those she felt had abandoned the US Constitution in service of Trump.

“The leaders of the Republican Party have made themselves willing hostages to a man who admits he tried to ‘overturn’ a presidential election and suggests he would pardon Jan. 6 defendants, some of whom have been charged with seditious conspiracy,” she said.