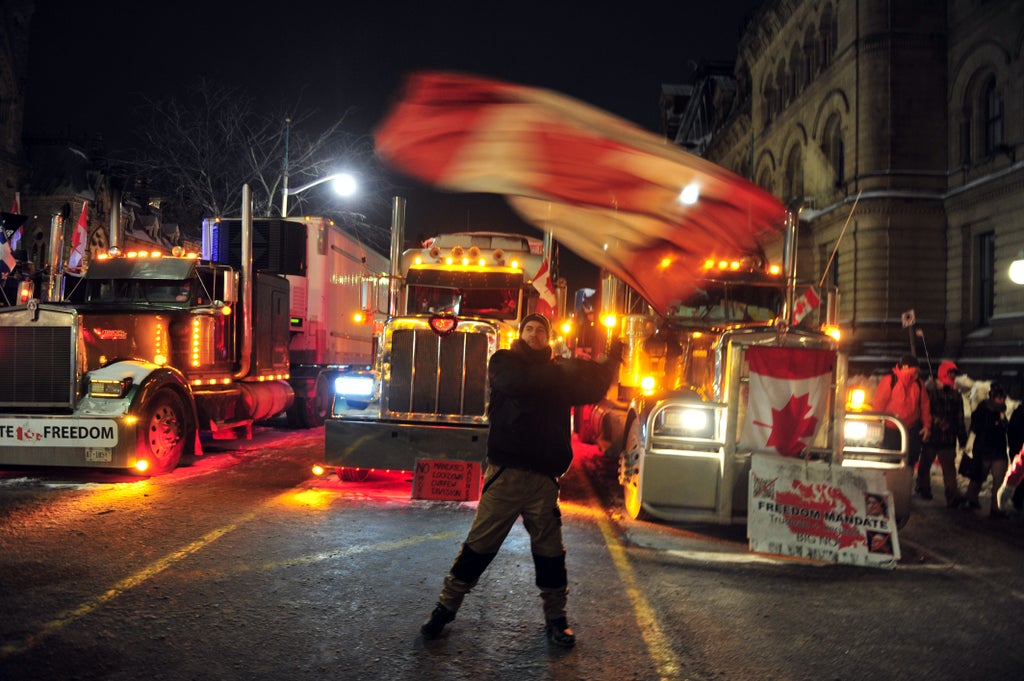 GoFundMe has removed a fundraiser and withheld millions of dollars of donations for Ottawa truckers protesting against Covid-19 vaccine mandates, as officials called on demonstrators to end their “occupation” of the city.

The fundraising platform announced in a statement on Friday that evidence from law enforcement had revealed that “the previously peaceful demonstration has become an occupation”, pointing to police reports of violence and unlawful activity.

Donations already made to the Freedom Convoy 2022 page will no longer be distributed to the organisers, with the funds instead being sent back to donors.

Initially, donors were told they could apply for a refund or their money would be distributed to charity. But, an update on Saturday confirmed that all donors will be automatically refunded with no need to request a refund.

Elon Musk waded into the matter on Twitter, accusing the platform of “double standards” and branding the company “professional thieves”.

The Tesla and SpaceX boss shared a screenshot of a tweet from July 2020 where GoFundMe promoted a fundraiser for Seattle’s Capitol Hill Occupied Protest (CHOP) zone.

The CHOP zone began in June 2020 as a peaceful occupation as part of nationwide protests against racial violence and police brutality following the murder of George Floyd.

It was cleared by police six weeks later following a string of four shootings in 10 days that left two people dead.

See also  Nicola Sturgeon 'does not have the courage' to tell SNP a referendum is not happening, says Labour's Wes Streeting

The Freedom Convoy 2022 GoFundMe had already raised more than $10 million (£5.8m) for the truckers who have been blocking the US-Canada highway since 29 January.

The huge protest came in response to the government’s introduction of a vaccine mandate on 15 January for Canadian truckers crossing the border into the country.

Around 85 percent of Canadian truckers were already believed to be fully vaccinated ahead of the Canadian mandate coming into effect, according to the Trucking Alliance.

The US already had a similar vaccine mandate in place, meaning truckers were already required to be fully vaccinated to drive across the border.

The week-long demonstration has brought Ottawa to a standstill, disrupting the supply of goods across the border and angering local residents.

While many protesters have been peaceful, footage surfaced online of some protestors climbing and urinating on the National War Memorial and dancing on the Tomb of the Unknown Soldier.

Others have been seen flying Nazi and Confederate flags.

There have also been reports of harassment and assaults and three people have been arrested over their involvement in the demonstration. One person was charged with carrying a weapon, another with mischief and another with making threats on social media.

GoFundMe initially suspended the Freedom Convoy 2022 fundraiser on Wednesday, saying it was “under review” while the platform ensured “it complies with our terms of service and applicable laws and regulations”.

Two days later, the platform announced that its review had resulted in its decision to remove the fundraiser altogether and seize all funds.

“GoFundMe supports peaceful protests and we believe that it was the intention of the Freedom Convoy 2022 fundraiser when it was first created,” the company said.

“We now have evidence from law enforcement that the previously peaceful demonstration has become an occupation, with police reports of violence and other unlawful activity.

“To ensure GoFundMe remains a trusted platform, we work with local authorities to ensure we have a detailed, factual understanding of events taking place on the ground.

“Following a review of relevant facts and multiple discussions with local law enforcement and city officials, this fundraiser is now in violation of our Terms of Service (Term 8, which prohibits the promotion of violence and harassment) and has been removed from the platform. ”

The platform said that $1m had been released to organizers earlier in the week after they had confirmed the funds would only be used for people who traveled to Ottawa to participate in a peaceful protest.

However, “given how this situation has evolved”, no other funds will be sent to organisers.

Meanwhile, another online platform has already offered to take donations for the truckers.

Ottawa Police welcomed the decision from GoFundMe and urged other platforms to follow suit.

“We want to thank @gofundme for listening to our concerns as a City and a police service,” the department tweeted.

“The decision to withhold funding for these unlawful demonstrations is an important step and we call on all crowdfunding sites to follow.”

The crackdown from GoFundMe came one day after the House of Commons Public Safety and National Security Committee called on the company to testify how it was making sure the donations didn’t wound up being used for extremism as officials condemned the protesters.

On Friday, Ontario’s Premier Doug Ford said the situation had become an “occupation”, breaking rank with most of the conservative party which has come out in support of the truckers.

“It’s not a protest anymore. It’s become an occupation. It’s time for this to come to an end,” he said.

Another conservative lawmaker described the participants as “radicals and anarchist groups, calling it “the Siege of Ottawa”.

“I spent the week undergoing the Siege of Ottawa,” Pierre Paul-Hus tweeted.

“I ask that we clear the streets and that we stop this occupation controlled by radicals and anarchist groups.”

Police have said they are prepared for protests to grow over the weekend.