The European Super League proposal was announced on Sunday, 18 April 2021. The plan was made public late at night and it was fitting that it was revealed under the cover of darkness. The elite were making a brazen assault on football.

Manchester United, Manchester City, Liverpool; Chelsea, Arsenal, Tottenham; Real Madrid, Barcelona, ​​Athletic Madrid; Juventus, AC Milan and Inter Milan had all agreed to join the closed shop league. The news was surreal for ordinary Mancunians getting up for work on that Monday morning. United fans felt betrayed and they weren’t going to allow their club to be taken away from them.

The backlash to the proposal was unprecedented. Each founding club’s owners — who had perhaps underestimated fan power through naivety or arrogance — had grossly miscalculated. They had committed a sin that they would never be forgiven for.

Joel Glazer, co-Chairman of United, was named vice-chairman of the Super League in the proposal. The plan was so despicable and malicious, but United fans claimed not to be surprised by his involvement. The Glazers have never been welcome at Old Trafford.

In the statement on that now-infamous Sunday night, Glazer wrote: “By bringing together the world’s greatest clubs and players to play each other throughout the season, the Super League will open a new chapter for European football, ensuring world-class competition and facilities, and increased financial support for the wider football pyramid.”

It took two days for United to withdraw from the plan and another day for Glazers to apologize ‘unreservedly’ for the damage it had caused. Glazer promised to make amends, but on the first anniversary of the proposal, has anything really changed?

MEN Sport have looked back at the Super League to send a timely reminder of the most brazen assault on football in history.

“12 of Europe’s leading football clubs have today come together to announce they have agreed to establish a new mid-week competition, the Super League, governed by its Founding Clubs,” the Super League’s first statement read.

The Super League’s website looked poorly designed and that added to the surreal nature of the words written across it. There had been reports and whispers about the Super League before its announcement, but here it was in black and white — it was actually happening. It was made worse for United fans by Glazer’s direct involvement. He had been a driving force in the proposal.

Earlier that day, before the official announcement, Gary Neville embarked on an explosive rant. “We need to wrestle back the power in this country from the clubs at the top of this league, and that includes my club [Man United],” he said. “It’s an absolute joke and the time has come now for an independent regulator to stop these clubs having a power base. Enough is enough.”

The proposal was met with unprecedented anger when made official. Supporters from each of the founding clubs up and down the country mobilized against the Super League and Old Trafford became the focal point for protests. Enough was enough.

The closed shop ‘elite’ division had been emphatically rejected. “Created by the Poor; Stolen by the Rich,” was one of many banners at Old Trafford. There was a real feeling of unity across supporter groups against the plan. That was highlighted when Liverpool played Leeds on the Monday night after the announcement, with both sets of fans protesting together outside Elland Road.

ABBA’s ‘Money, Money, Money’ was played as Liverpool’s coach arrived and Leeds players wore t-shirts with ‘EARN IT’ etched across in the warm-up. The protests continued outside each stadium up and down the country the following Tuesday afternoon.

Luke Shaw, Bruno Fernandes and Marcus Rashford had all spoken out against the plan by that point and it was about to collapse.

Manchester City and Chelsea withdrew first and United followed, officially confirming they had done so along with Tottenham, Liverpool and Arsenal at 10.55pm on the Tuesday night. It was a victory for supporters and a win that really mattered.

Glazer wrote an open letter to supporters the next day. “Over the past few days, we have all witnessed the great passion which football generates, and the deep loyalty our fans have for this great club,” the statement read.

“You made very clear your opposition to the European Super League, and we have listened. We got it wrong, and we want to show that we can put things right. This is the world’s greatest football club and we apologize unreservedly for the unrest caused during these past few days.”

The Manchester United Supporters’ Trust swiftly responded to the open letter and they were skeptical of the remarks.

MUST also indicated that they remained committed to ‘ensuring a supporter share scheme is put in place which carries equal voting rights to the shares held by the Glazer Family’. They warned they would not relent until that was achieved.

United might have withdrawn from the plans but the anger was never going to dissipate — the protests were only getting started.

Thousands of supporters descended on Old Trafford on the Saturday. “Glazers out, Woodward out, after £1bn stolen from MUFC,” read one banner while another read: “United against greed.” Anti-glazer chants were aired loudly throughout that afternoon.

United fans had two things that had been absent across their previous protests against the Glazers: unity and momentum. The anger wasn’t going away and another protest was organized for the following weekend, for the visit of Liverpool at Old Trafford. 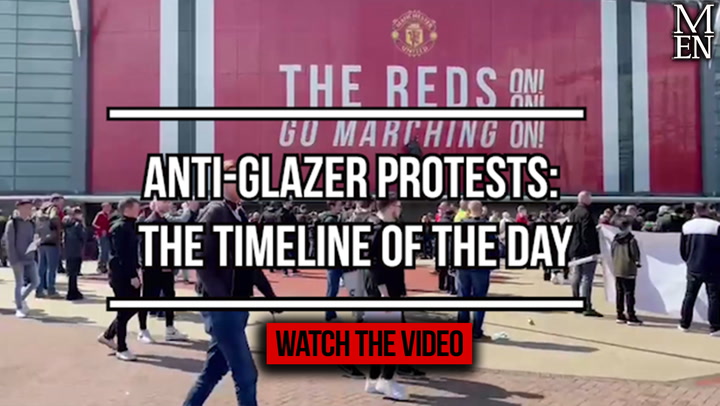 That protest was yet another victory for supporters. They had protested — the majority peacefully — with around 5,000 fans to get the match postponed and it worked, making it the first time a Premier League match had been postponed because of fan protests.

United were forced to stay in The Lowry Hotel as supporters sang “we decide when you can play.” The team buses remained empty and Old Trafford was besieged just down the road, with supporters breaking onto the pitch.

The protest officially got under way at 2pm and it didn’t take long for events to take a dramatic twist as hundreds of fans broke into the stadium and stormed the pitch, eventually putting the game in doubt. The Glazers had never felt such anger.

It is the first anniversary of the Super League proposal today. It is important to remember the chain of events to hold those with the most power to account. It was a direct assault on the sport and supporters, who are the very fabric of football clubs.

Almost one year to the exact date since the first April 2021 protests, United fans were protesting again at the weekend against the Glazers’ ownership. The Super League collapse felt like a genuine watershed moment but nothing has actually changed.

United equaled their worst trophy drought for 40 years this season and the Glazers appear unmoved by calls for their removal. The club’s standards seemingly continue to slip and it’s no wonder fans felt the need to protest before the Norwich game on Saturday.

The proposed fan share scheme that MUST have pushed for is believed to be at a critical juncture with no guarantee it will go ahead.

“We have worked hard since last summer to design a fans’ share scheme which would open a path for fans to build a meaningful ownership stake in the club,” a United spokesperson said.

“Significant progress has been made, but this is a complex project and we are continuing to work towards a robust and attractive proposal for fans.” United fans aren’t seeing any significant progress in any aspect around the club, never mind the share scheme.

Glazer promised to rebuild bridges with supporters after the collapse of the Super League but the club’s relationship with fans is as fractured as ever. The anger is rising again and fans will remember they have the power when they are truly united.

The unrest will continue until the Glazers make radical changes or sell the club.