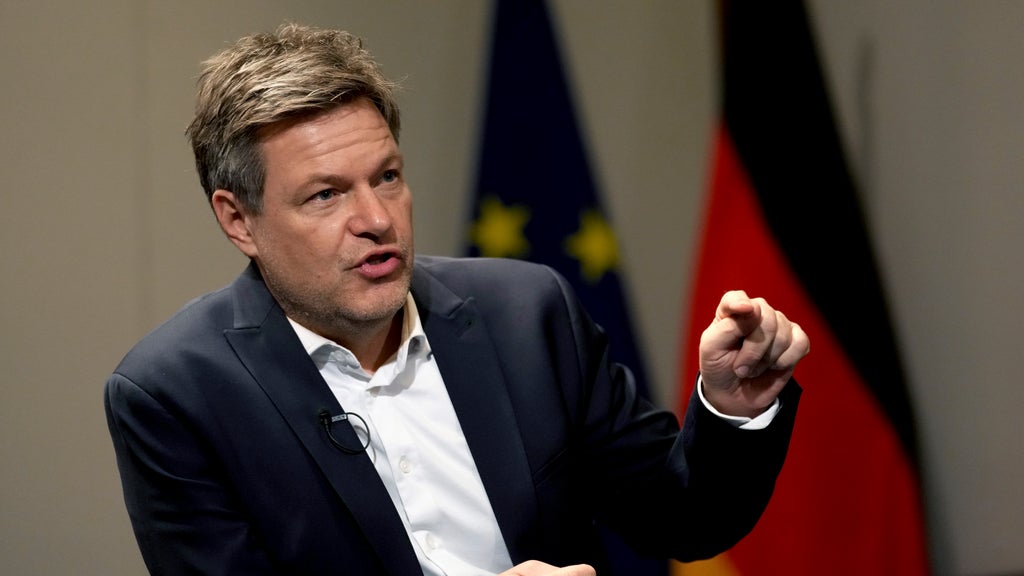 Germany’s vice chancellor said Thursday that Russia’s attack on Ukraine is “completely illogical” and will backfire, causing western nations to stop buying Russian coal, oil and gas — an important source of income for the resource-rich country.

Robert Habeck, a powerful figure in the new German government whose portfolio includes economy and climate, said the crisis will strengthen the case for customers of Russian fossil fuels to pursue energy independence by boosting renewable sources.

“From a rational point of view, this is completely illogical,” he told The Associated Press in an interview hours after Russia unleashed its military might against its smaller neighbor.

“The complete West will turn away from Russia,” he said. “We will diversify our energy system. We will not buy Russian coal and gas in such an amount in the future.”

Germany currently gets about half of its natural gas and coal from Russia, and a third of its oil.

Allies such as the United States have long warned that the heavy reliance of Europe’s biggest economy on Russia energy imports is a strategic risk given the growing friction with Moscow. Until recently, German officials insisted that Russia had proved itself to be a reliable supplier and even backed the construction of a new natural gas pipeline through the Baltic Sea, despite protests from the US and other allies.

Germany halted the Nord Stream 2 pipeline project Tuesday as tensions with Russia over Ukraine escalated — a move that was applauded in Washington and Kyiv.

Habeck said measures to shore up gas reserves in recent months, along with a fortunate abundance of wind power following a blustery February, had helped prevent a shortage for consumers as energy prices shot up and Russia held back additional supplies.

See also  Family of 'abducted' Nevada teen Naomi Irion, 18, say they are banking on her spirit: 'She made it then, she can make it now'

“We see a direct effect: the more renewable energy is in the market, the less natural gas we use,” he said.

“I definitely think that the current situation will help the transition into renewable energy in Germany and Europe,” he told The AP at his office in Berlin. “People see that it is not only a climate-related issue, but a safety or security -related issue right now.”

Extending the lifetime of Germany’s three remaining nuclear plants isn’t an option, and building terminals for tankers filled with liquefied natural gas — an idea Habeck’s Green Party was previously skeptical of — will take years, he said.

Still, Germany is looking to get LNG from suppliers such as Qatar to cover any shortage in the near term.

Habeck acknowledged that, on the diplomatic front, Germany’s efforts to foster talks with Moscow by refusing to supply Ukraine with weapons had failed.

“From a German perspective, we were trying to hold the line open for diplomacy,” he said. “We thought it was a good idea not to go into weapon delivery to Ukraine because then the possibility of talks would be narrowed. This was our strategy, actually. It hasn’t worked out.”

Nor did sanctions imposed earlier this week deter Russia from sending troops into Ukraine, he said. “But we can strengthen the pressure on (Russian President Vladimir) Putin and his people from him, and then we will wait and see what comes out of it.”

Habeck said he believed Putin personally should face sanctions for his actions on Ukraine, and expressed doubt whether further talks with the Russian leader would be helpful.

“I think we have to talk with Russia, and Russia is more than Putin,” he said. “I hope that some people will speak for the other Russia, and they have a voice that can be heard and they will not be suppressed.”

Habeck said he had been emotionally moved by a visit to the Ukrainian embassy in Berlin, where tearful staff expressed fears for their loved ones back home amid the Russian advance.

Habeck said he still wants to embark on his first official visit to the United States next week, if the crisis allows him to, arguing that it’s vital to strengthen the trans-Atlantic partnership further.

The trip was scheduled to include meetings with senior US officials and a visit to the Deep South, where several large Germany companies have manufacturing plants.

“In a way it’s the best moment to go there,” he said. “We have a lot of things to discuss: trade issues, relations (with) China, but of course in the current situation I also expect that the security issues and the energy supply security issues are of uppermost interest.”