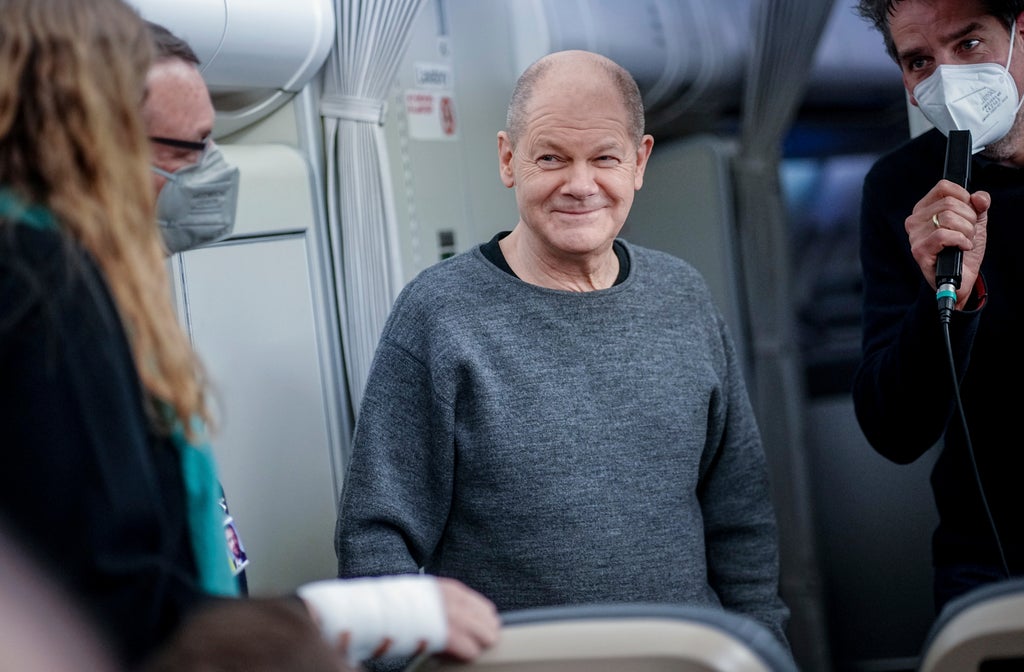 German Chancellor Olaf Scholz is flying to Ukraine and Russia this week in an effort to help defuse escalating tensions as Western intelligence officials warn that a Russian invasion of Ukraine is increasingly imminent and Germany has called on its citizens to leave Ukraine as quickly as possible.

Ahead of his first visits as chancellor to Kyiv on Monday and Moscow on Tuesday for meetings with the Ukrainian and Russian presidents, Scholz has renewed his warning to Russia, as well as his advocacy of continuing diplomacy in multiple formats.

“It is our job to ensure that we prevent a war in Europe, in that we send a clear message to Russia that any military aggression would have consequences that would be very high for Russia and its prospects, and that we are united with our allies ,” Scholz told the German parliament’s upper house on Friday.

“But at the same time that also includes using all opportunities for talks and further development,” Scholz said.

Russia has concentrated more than 100,000 troops near Ukraine’s border and launched a series of military maneuvers in the region, but says it has no plans to invade the nation.

Moscow wants guarantees from the West that NATO won’t allow Ukraine and other former Soviet countries to join as members, and for the alliance to halt weapon deployments to Ukraine and roll back its forces from Eastern Europe. The US and NATO flatly reject these demands.

Scholz has repeatedly said that Moscow would pay a “high price” in the event of an attack, but his government’s refusal to supply lethal weapons to Ukraine or to spell out which sanctions it would support against Russia have drawn criticism abroad and at home and raised questions about Berlin’s resolve in standing up to Russia.

Germany’s reluctant position is partly rooted in its history of aggression during the 20th century when the country’s own militarization in Europe during two world wars led many postwar German leaders to view any military response as a very last resort.

Despite this historic burden, experts say it is of utmost importance now that Scholz stresses Germany is in sync with its European and American allies, especially when he meets with Russian President Vladimir Putin

“Scholz has to convey a very clear message in Moscow, and it can really only be: There is unity and oneness in the Western alliance. There is no possibility of driving a wedge into the Western alliance, and that must be understood in Moscow. I think that’s the most important message he has to convey there,” said Markus Ziener, an expert with the German Marshall Fund.

“At the same time, he has to make it clear that the costs are high,” Ziener added. “That’s basically the message that he is most likely to catch on in Moscow as well. So a military invasion of Ukraine has significant consequences for Russia.”

Scholz has not explicitly said what kind of consequences or sanctions Russia would have to face if it invades Ukraine, but it is clear that the future of the controversial Nord Stream 2 pipeline that seeks to bring Russian natural gas to Germany under the Baltic Sea, bypassing Ukraine, is at stake.

US President Joe Biden threatened last week that the pipeline would be blocked in the case of an invasion.

That would hurt Russia economically but also cause supply problems for Germany. Construction of the pipeline has been completed, but it is not yet operating.

“Germany doesn’t have much leverage, except for saying that it won’t approve Nord Stream 2, which is the only political leverage,” Claudia Kemfert, the head of department of energy, transport and environment at the German Institute for Economic Research , said.

“Otherwise, Germany is very susceptible to blackmail. We can’t do too much. We have committed ourselves to getting the gas supplies, unlike other European countries we have not diversified our gas supplies and we have dragged our feet on the energy transition. So we did a lot of things wrong, and now we are paying the price,” Kemfert added.

It is not surprising, then, that Scholz has stressed the need to keep some ambiguity about sanctions to press Russia to de-escalate and has so far avoided mentioning Nord Stream 2 specifically.

“The hesitancy of Olaf Scholz obviously leads to the fact that one does not really know what the Germans actually want,” Ziener said. “With regard to Nord Stream 2, I think there should have been a clear statement that if it comes to a military intervention, then Nord Stream 2 is off the table.”

Asked on Friday whether Scholz will be taking any new initiative to Kyiv and Moscow or the positions that are already on the table, his spokesman, Steffen Hebestreit, replied that he will stick with “the positions that we have already set out.”

Scholz can only hope that in his talks with Putin he can dissuade him from taking military action with a face-saving solution, says Ziener.

“He can actually only hope that at the end of this whole round of negotiations there will be a success, that the war is prevented. Then Scholz will be praised for his negotiating skills,” Ziener added. “If not, the question will be asked: What was actually the line of the German government?”