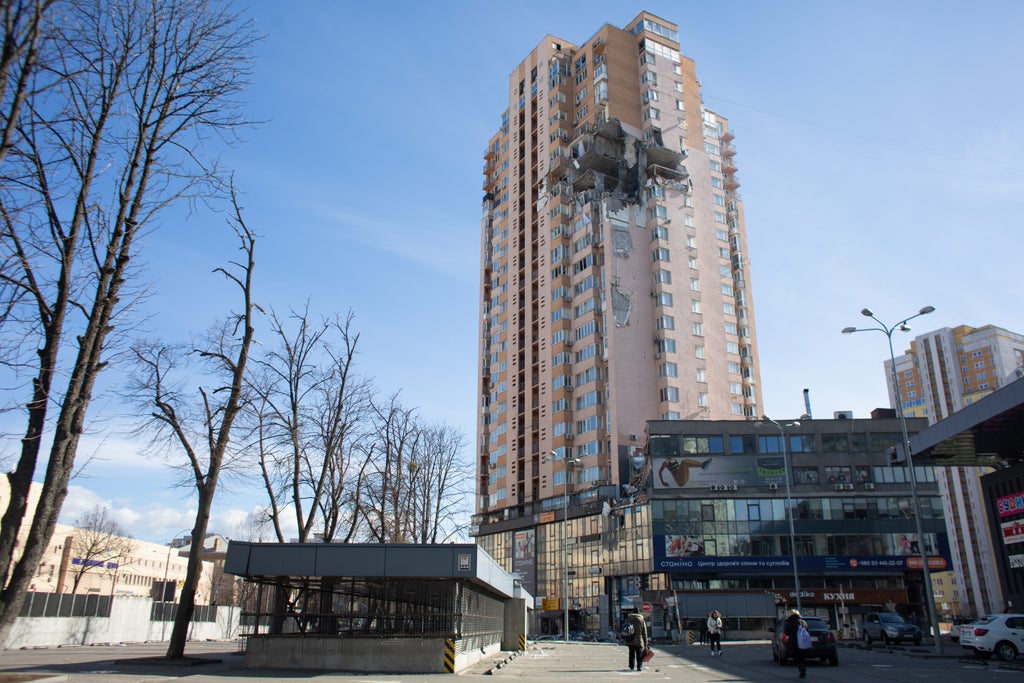 The leader of a unit of volunteer fighters in Ukraine has said he has never before seen such “brutality and barbaric acts” in his 30 years of military service as civilian casualties continue to mount at the hands of Russian forces.

Mamuka Mamulashvili, commander of the Georgian National Legion and former Georgian military officer, told The Independent that he had fought in conflict against Moscow four times before Russia began waging its “unfair war” on Ukraine last week.

But, with President Vladimir Putin’s troops continuing to lose battlegrounds to Ukrainian fighters, he said Russia has now resorted to bombing civilian areas and killing innocent men, women and children “to panic everybody”.

Speaking from his position on the frontline close to Kyiv on Monday night local time where he said Russian forces were “bombing us persistently”, Commander Mamulashvili called on Western governments to “together stand against the evil empire”.

“I’ve been a soldier for 30 years and I’ve never seen such brutality and barbaric acts as I’m seeing Russia carry out on Ukrainians,” he said.

“I’ve been in many battles. I was in Russian captivity when I was 14 with my father but what is happening now feels like we’re in a movie.

“The Russians are losing battlegrounds almost everywhere but the thing that they’re doing, they’re now bombing civilian blocks, just to panic everybody. It’s an unfair war.”

At least 136 Ukrainian civilians, including 13 children, have so far been killed in the six days since Russia launched a full-scale invasion in Ukraine, according to the UN, though the agency admits that the true figures are likely much higher.

See also  Addict mum kicked neglected son, 7, out of bed so she could have sex with clients

In one incident now being investigated for war crimes, at least one child and two adults were killed after Mr Putin’s forces dropped bombs on a preschool in the city of Okhtyrka, where civilians were seeking shelter.

This came after a schoolgirl, believed to be just nine or 10 years old, was shot dead along with her parents in their car in Kyiv.

“I never imagined I would have to fight for Kyiv. It was a beautiful city and everything is now ruined – they’re even bombing children’s hospitals,” said Commander Mamulashvili.

“It’s terrible what Putin is doing right now and it’s terrible that this is happening in the world in the 21st century.”

Commander Mamulashvili said that around “90 per cent of forces” in the area where he is positioned are Russian but Ukrainian fighters are continuing to win battlegrounds.

“There are battlegrounds almost everywhere in the country. On our piece of the frontline it’s quite intensive and what disturbs us most is their position in the air,” he said.

“The area is mostly occupied by Russian jets and helicopters and they are bombing us persistently but we’re trying to resist and we’re winning battlegrounds.”

A growing number of civilians are joining in the fight to defend their country and this is strengthening the country’s position, he said.

“The Ukrainians are motivated and as time goes on more and more civilians are getting engaged in the battle process and making it harder for the Russians,” he said.

“Civilians are taking a very big part in the war now and they’re doing a very good job and they’re protecting their homes and kids and families.

“Putin made a mistake coming to war with Ukraine.”

While the Georgian National Legion does not include civilians, he said that it did train around 300 Ukrainian civilians as tensions were escalating and war became an increasing possibility.

“We had a sense that war would come,” he said.

He set up the Georgian Legion in 2014 as a unit of volunteer fighters to defend Ukraine in the War in Donbas.

Mainly made up of Georgians, the unit is now recruiting volunteer fighters from across the globe including the US, the UK and other European countries who want to come to Ukraine to fight alongside Ukrainian troops.

Over the next few days, the legion is expecting its first major wave of recruits since the war started, including around 50 Americans, 100 Britons and around 400 Georgians in total.

Commander Mamulashvili said that he is receiving a growing number of applications from veterans volunteering to join the legion and believes this number will only grow further.

On Sunday, Ukrainian President Volodymyr Zelensky launched an international legion appealing to foreign nationals to come to Ukraine to help in the country’s fight against Russian attack.

He said that Western nations need to do more to support Ukraine with the survival of democracy depending on the future of the country.

“In the words of President Roosevelt in 1940, he said America must ‘must be the great arsenal of democracy’,” he said.

“In my opinion today we’re still facing a big threat to Europe and I’m appealing to President Bident to provide the arsenal to Ukraine as the UK goes red lines to divide the civilian world and the barbaric world.

“So we must unite today for democracy to survive as it might die in Ukraine.”

He added: “The West must be more engaged in the process and we must together stand against this evil empire that is trying to rebuild the former Soviet Union.”